Buy this article. Or Love it. Either or.

Bill O’Reilly, a conservative political commentator for Fox News Channel, had his two cents (dommage… 97 more and he would have been able to buy himself a small soda) to add the French-American culture way, when he featured a French McDonald’s commercial on his popular show, The O’Reilly Factor.

What was all the fuss about? Take a look and guess.

Bill O’Reilly started bashing the commercial for the manner in which McDonalds “uses” homosexuality as a “political statement to sell burgers”. A fellow commentator, Jane Skinner, added: “They show people from different walks of life. This happens to be their ‘gay-friendly’ ad”.

O’Reilly’s response: “Do they have an Al-Qaeda ad?” Ouch.

Granted, this petite polémique is a blip on the radar that dates back to prehistoric times (i.e. 2010), if you consider how much information we’re bombarded with on a daily basis. However, what interests me the most is the comment O’Reilly mentioned several times during this segment: “It’ll never run in the USA”.

Really? As Americans and the French start to have more and more cultural tastes in common, can we really assume that what works in one country for a company as universal as McDonalds won’t work for another?

To answer my question, I conducted a highly legitimate evaluation called ‘asking around’ to see how Americans react differently to commercials than the French. Apparently, yes. There are a few key differences in how French people bring themselves to invest or purchase in something – whether this be an airline ticket or a formule. Through a bit of online research, here are two major differences I’ve found:

It’s not a commercial – it’s a 30-second philosophical ode to the joys of life and the benefits of intellectual culture. Duh.

You skim through magazines and stop at every page, including the advertisements, to admire the lighting, model, and/or general tone.

‘Flipping through commercials’ to get to a program? No – you flip through programs to get to the commercials.

Congratulations. French TV is for you.

Since Nicolas Sarkozy banned commercials on France’s major public channels during evening hours, I wouldn’t go so far as to say that commercials are ‘sought after’ by the public, but it might be true that they do have to have a certain style or artistry to them to be noticed. Many of the most well-known commercials in France appeal to the viewer’s sense of nostalgia or humor. Lost your lover? Never had one? Craving cheese in the middle of the night? These burning questions, all completely irrational and dictated by our emotions, are what French commercials try their best to answer in 30 seconds. Rather than the more pragmatic American approach of ‘Get off your couch and subscribe to a dating service’, the French aim more towards, ‘Spritz yourself with X perfume and you’ll soon find yourself flying naked in midair with a gorgeous man.’

This kind of imagination and creativity doesn’t come cheap, which is why many companies recruit top-notch directors to realize the 30-second fantasies for their consumers. Michel Gondry and Luc Besson are only two many the many award-winning directors, known most for their films like the Science of Sleep and The Lady, respectively, who have directed many ads on behalf of L’Oreal, Dim’s, Orange and Air France. 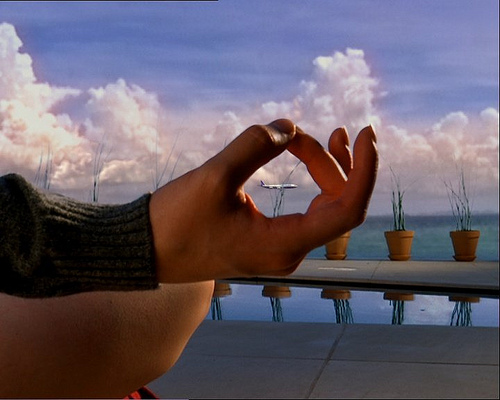 So, at least in France, consumers have to first become attached to products before they buy them, perhaps because they remind us of our childhood or of the person we would like to become. I, personally, am not convinced. At the end of the day, a trash bag is a trash bag, a perfume is a concoction of chemical and floral compounds that make you smell nice, but, unfortunately, will not convince that tall, dark stranger on the bus to have your children.

This pragmatic and utilitarian approach is perhaps the effect of a long-term life led by (somewhat) rational behavior. Or perhaps I lack imagination. There is something to be admired about French ads, though, where the simple act of appreciation means more to the company than the actual purchase of the product. Hopefully, we can see more artful ads in the USA in the near future that will rival those of France, and French ads that flagrantly aim towards your checkbook. What can I say? Nous venons comme nous sommes…