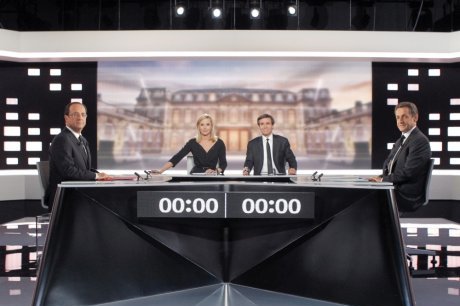 The long awaited confrontation between Nicolas Sarkozy and François Hollande kept more than 17 million French people in front of their TV for almost 3 hours on Wednesday night. Considered the last mile for the candidates, this republican ritual is also a decisive event for the still-hesitant voters.

Thus the setting of the debate, the duellists’ wording, tone of voice and their gestures are considered to be as important as their political programs.

TF1-France2: A unique stage for a one-off performance

The day before the duel, the battlefield was carefully prepared by each campaign team. The minute details were agreed upon in a co-signed contract.

Nothing was left to chance: from the temperature in the TV studio, to the type of chairs and the setting of their height; the size of the table and the noise it produces when hit by a fist, to the order in which the candidates would speak and the precise timing of each intervention.

In the referee seats, two famous journalists from TF1 and France2 would essentially keep an eye on the timer and guide the debate along major topics such as the economy, the nuclear energy policy, the international situation and the role of France in the European Union. Further topics were taxation and the health systems, the immigration intake and voting rights for foreigners, to name a few.

In addition, an anthill of supporters was lined up on both sides to nurture live online discussions. 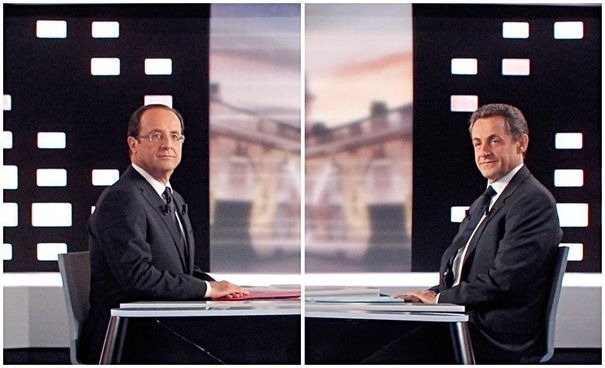 The moment of truth

During the final weeks of the campaign a certain tension had built up between the two finalists. It was palpable during the debate, leading at some points to quite offensive and mocking exchanges.

The usually cool tempered Hollande showed another side of his personality – he was determined and ready to fight for his ideas. He first attacked his opponent on his five-year results and political behaviour before claiming 15 times “Moi, Président de la République, je….” in a 3 minute non-stop speech about all the things he would do, change or promise if elected President.

In his opening remarks, Sarkozy insisted on the need for truth and authenticity. He brought hard figures to the table and underlined Hollande’s lack of experience in a high level governmental role.

Sarkozy concluded the debate with a clear call to those who voted for Marine Le Pen (right wing) and François Bayrou (Modem center party), totalling together some 20% of voters in the first round of the election.² Today we know that Le Pen will enter a blank ballot. Bayrou has indicated his personal preference for Hollande. Neither of these party leaders officially made any recommendations to their voters.

Communication specialists say that such a debate is won by humanity, warmth and the capacity to convince in words as well as in posture. So, we will see…on Sunday.

As a reader of My French Life™, you probably know how dearly the French value their language. Naturally they are fond of verbal tournaments a.k.a. joutes verbales. Like all previous presidential debates, this one was full of little expressions or petites phrases, made to stick in the voter’s mind.³ Some are carefully prepared, others may be spontaneous, who knows? But for sure the candidate is remembered for them for years afterwards.

This is the second article in a three-part series on the 2012 French presidential election by Marianne.

______
1 Rue89.com
2 Pluzz.fr
3 Most French people remember the very first presidential debate to be broadcast on TV (in 1974) between Valérie Giscard d’Estaing (VGE) and François Mitterrand (FM). VGE became famous for his “you do not have a monopoly on the heart”, addressed to FM, who fired back seven years later, calling VGE “l’homme du passif“.
______
Image sources:
1 Patrick Kovarik / AFP on  SudOuest.fr
2 Patrick Kovarik / AFP on l’Express.fr