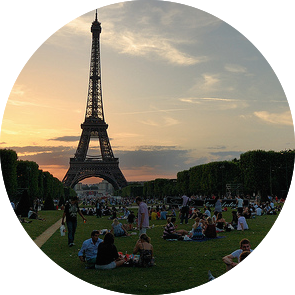 There is nothing I would rather do on a warm Paris evening than to picnic with friends. But we’ve all seen the police come by and demand that picnickers put their alcohol away.

The ‘no drinking’ rule seems to apply inconsistently – must we really refrain from sipping that glass of rosé as we picnic in Paris?

I decided it was time to get to the bottom of this and did what perhaps no one has dared to do before: I went to the préfecture to ask. They looked at me as if I were insane. But I did learn one thing: There is a reason for the inconsistency.

Each city’s maire has the right to establish rules to maintain the public order, and in Paris the rules differ by arrondissement. Even specific streets may have their own rules! And there is yet another layer of confusion, no alcohol is permitted in parks owned by the Ville de Paris – except at licensed establishments.

So, unfortunately, the only way to know for sure is to check at the specific préfecture for your neighbourhood. Even then, you must hope the flic on patrol is up on the latest regulations.

Refusing to give up, I decided to search for the relevant arrêtés (orders) and go to a few of the local police stations to get the scoop on some of my favorite picnic spots. Not an easy task! So, a little disclaimer: it’s best to check for yourself to be certain of the very latest rules!

These spots do not permit the consumption of alcohol

It’s central, there’s grass that dries quickly after rain, and you have a view of the Louvre and the Eiffel Tower. This park and the Jardin des Tuileries are privately owned by the Louvre.

A quiet spot hidden away in the heart of central Paris, not owned by the city but rather is a designated national monument. You can only picnic on the southern lawn towardsObservatoire. These gardens are owned by the Senate and alcohol is only permitted at licensed establishments. hamps de Mars
The twinkling of the Eiffel Tower never gets old… but no alcohol is allowed here; they really do enforce it.

Try to avoid lunch hour for the thousands of school children in the area.

Especially when the tulips are in bloom. Alcohol is only permitted in designated establishments. (I recommend Rosa Bonheur!)

Remember to bring a blanket because there is no grass. No public drinking is allowed on the quais in the 6th or on the Pont des Arts from 4pm – 7am, from 1 May – 31 October. The quais in the fourth arrondissement are apparently fair game, so most of ‘Paris Plage’ is theoretically a safe zone. Fantastic view of the cathedral at Les Invalides. Overt consumption of alcohol could pose a problem, but the préfecture of the 7th tells me there is a “tolérance” (i.e. enforcement here is not at the same level as in the Champs de Mars).

The good news is this: if you are having a few peaceful drinks (and not an out-of-control party), most likely the police will just come by and ask you to put away the bottles. You’re unlikely to get dragged off to jail or fined without a warning.

Do you have any tips on the rules and regulations in Paris? Share them with us in the comments box below!