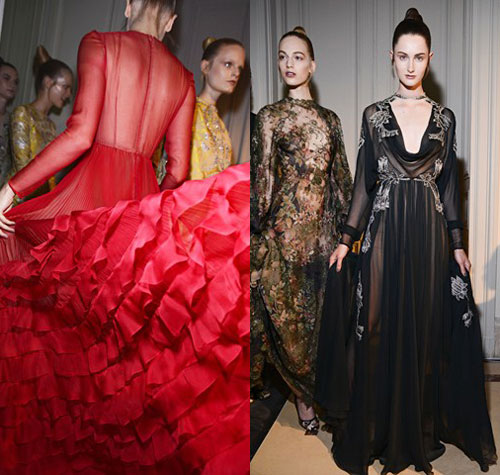 The purpose of haute couture is, as its name suggests, to be unreachable. It’s the substance of wishes and fairytales. This year’s Haute Couture Week in the French capital flew by as if in a dream…

Couture is coats that take several million dollars, tens of thousands of crystals and one whole month to make. Its larger-than-life designers and the most star-studded front rows you could imagine.

The announcement that this ‘week of all weeks’ had begun came with Raf Simons’ debut at Dior. The new artistic director of this French fashion heavyweight assembled an elegant first show. Sharp suiting sat alongside 3D florals and tempered, yet luxuriant gowns. Though it was the chemically enhanced face of Donatella Versace who kicked off the week, for me, Simons stole the show. Versace has never really been my cup of tea – or flute of champagne.

Be my French Valentino One of the more thrilling moments of last week was provided by the house of Valentino. The show began with demure silhouettes and a dark, muted palette. Then, as if someone had flipped a switch, a transformation took place. It was a refined mixture of glitter, jewels, silk and chiffon. Delicate florals were preceded by heavy brocade. Silhouettes were reminiscent of a dark brand of art deco, or modern Tudor style. Another favourite was Elie Saab’s dreamy combination of ladylike lace and sparkling embellishments. From dramatic black to peach and oceanic teals, dress after stunning dress sashayed down the runway. It was almost too much to bear. Giambatista Valli gave some equally elegant offerings. Dramatic ruffles were paired with pastels and bright graphic patterns. While the silhouettes were rather flattering, the butterfly face veils were somewhat unnerving. Giambatista Valli wasn’t the only one indulging in this strangest of trends.¹ Armani Privé (pictured above) teamed dramatic sequins and structured shapes with glittering, bejewelled veils. The effect was distorting and theatrical – not a look to be adopted lightly. Martin Margiela (pictured above) took the award for the most dramatic face-obscuring garment, covering his model’s faces entirely in giant jewels.² Personally, this headgear made me uncomfortable. Perhaps I’ll leave it for Lady Gaga, or her Saudi princess equivalent.

While Margiela’s veils traced the line between larger-than-life and largely bizarre, others crossed it entirely. Never one to shy away from controversy, Jean Paul Gaultier did not disappoint.

Frankly, I’m tired of his ‘enfant terrible’ charade: it seems he designs weird things just to be noticed. They don’t help anyone, and they really don’t inspire me.

Haute couture has a customer list of only 200 of the world’s richest women. Collections must meet stringent criteria if the title of ‘haute couture’ is to be awarded.³

But when fashion comes down to how many sequins are beaded onto the dress and the amount of hands that sewed it together, bigger can get the best of many designers. The Gaultiers and Gallianos of this world are testament to this. But an intelligent few are making their mark on French design, and the world at large.

Which was your favourite collection at the haute couture shows in Paris?