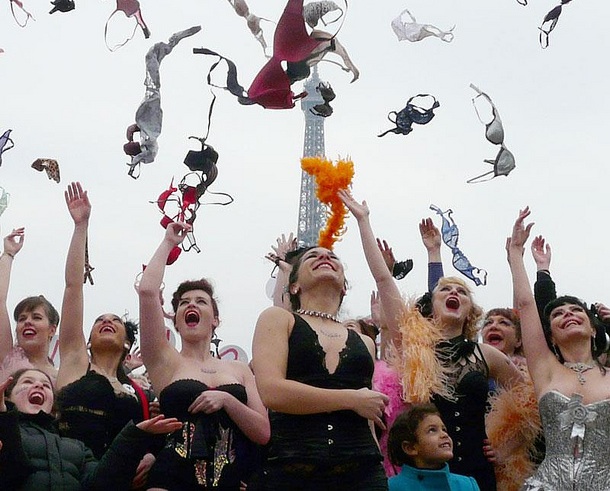 Les Français like to do things their way. October might be the ‘official’ breast cancer awareness month, but for the French charity Pink Bra Bazaar, the first day of spring is the perfect occasion to celebrate breast health.

Breast health education: do it the French way!

Home for spring break, I lugged my suitcase up the steps of the Esplanade du Trocadéro wondering where my mother was. She said to meet her here, but where? I scanned the Esplanade and squinted. Were those bras? Yes, they were. Women, men, and children dressed wearing colorful bras over their clothes. I was in the right place. And from what I could tell, Pink Bra Spring was well underway. 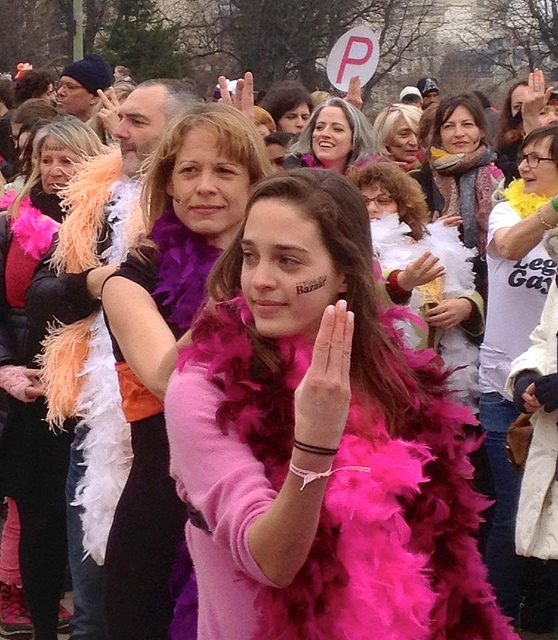 (Full disclosure, my mother is the co-founder of Pink Bra Bazaar, a charity dedicated to “Push Up the Fight Against Breast Cancer,” and ‘Pink Bra Spring’ is an annual event to promote breast health awareness).

A twenty-something year-old girl gave me a bra that I slipped over my coat. Another applied a Pink Bra Bazaar tattoo to my cheek and wrapped a boa around my neck, telling me I was “ready for the Pink Bra Striptease.” Ready for ‘what’? My mother hadn’t said anything about a striptease! But before I could object, the music started.

With the majestic Eiffel Tower as a backdrop, the choir, Mélodie du Bonheur, sang a variety of popular songs, including ‘California Dreaming,’ and the crowd clapped and sang along. Photographers gathered in the front row and positioned their cameras as if they were waiting for something else to happen. 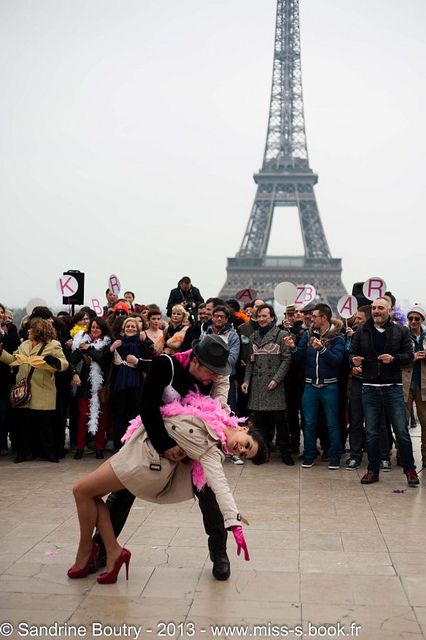 The choir stopped and the air filled with silence and anticipation. Suddenly Joe Cocker’s celebrated song, ‘You Can Leave Your Hat On’, resounded through the speakers.

Two very tall men dressed in black pants, Louboutin heals and colourful bras over crisp white shirts sashayed forward. From the middle of the choir, another man appeared carrying a burlesque dancer on his shoulder.

Sensual, teasing and amusing, the choreography also incorporated the simple steps of a breast self-examination, with the dancers pressing their fingers in circular movements over their breasts. 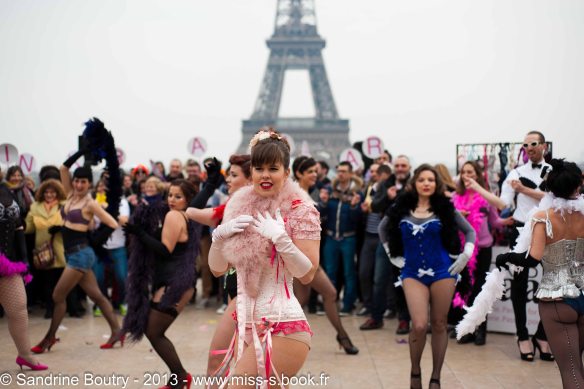 For the finale, the dancers slowly removed their bras and threw them upwards. Camera shutters clicked madly to capture the flight and fancy of hundreds of bras in the air. The effect was sensational.

According to Kathryn Kemp-Griffin (my mother) and Marie-Dominique Tabard, the co-founders of Pink Bra Bazaar, it is important to approach the subject of breast health awareness through femininity and to encourage open dialogue.

For Pink Bra Bazaar, lingerie is the ultimate symbol of femininity and provides a natural means of communication to discuss breast health. A bra is something women wear every day and is the perfect pense-bête to remind us to take care and think of our breast health.

You can read our interview with Pink Bra Bazaar co-founder Kate Kemp-Griffin here. Which bra is your favourite pense-bête?