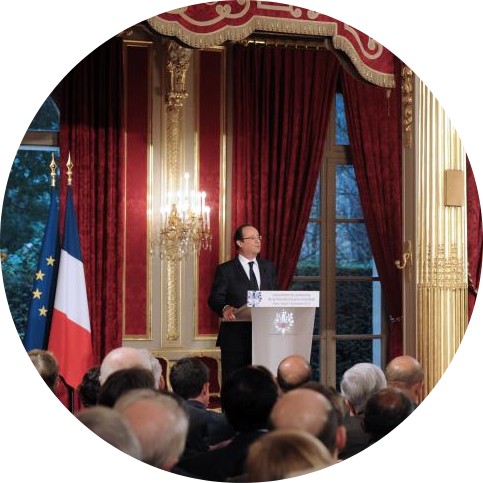 Happy New Year! 2014 promises to be full to the brim with sporting, political and cultural events.

The French football team has earned its place in the World Cup in Brazil and will attempt a repeat performance of 1998. The French will also head to the voting booths to elect their mayors and European representatives. 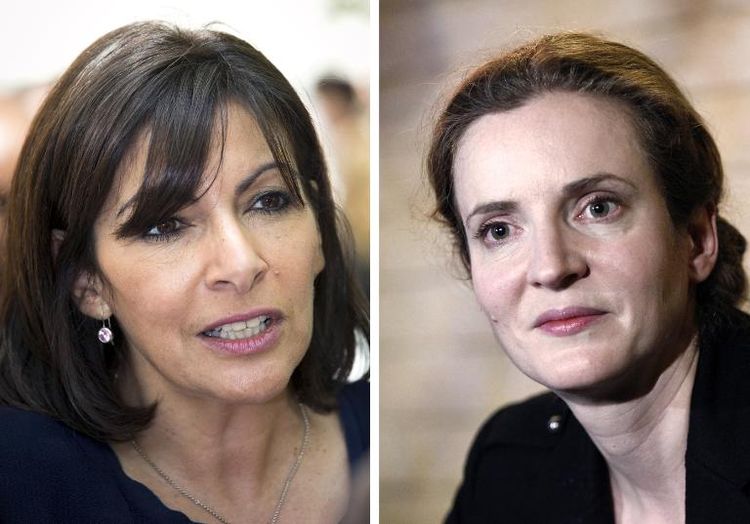 The Centre Pompidou will pay homage in a retrospective on the work of photographer Henri-Cartier Bresson.

At the box office, French comedy trio Les Inconnus will come together again on the big screen 18 years after their first film ‘Les Trois Frères’ (‘The Three Brothers’ – click here to watch the trailer).

Finally, from August this year, commemorations to recognise 100 years since the beginning of World War Once will start.

Sport, politics or culture: Which category of article do you prefer?

Have your say @MaVieFrancaise #lebuzz 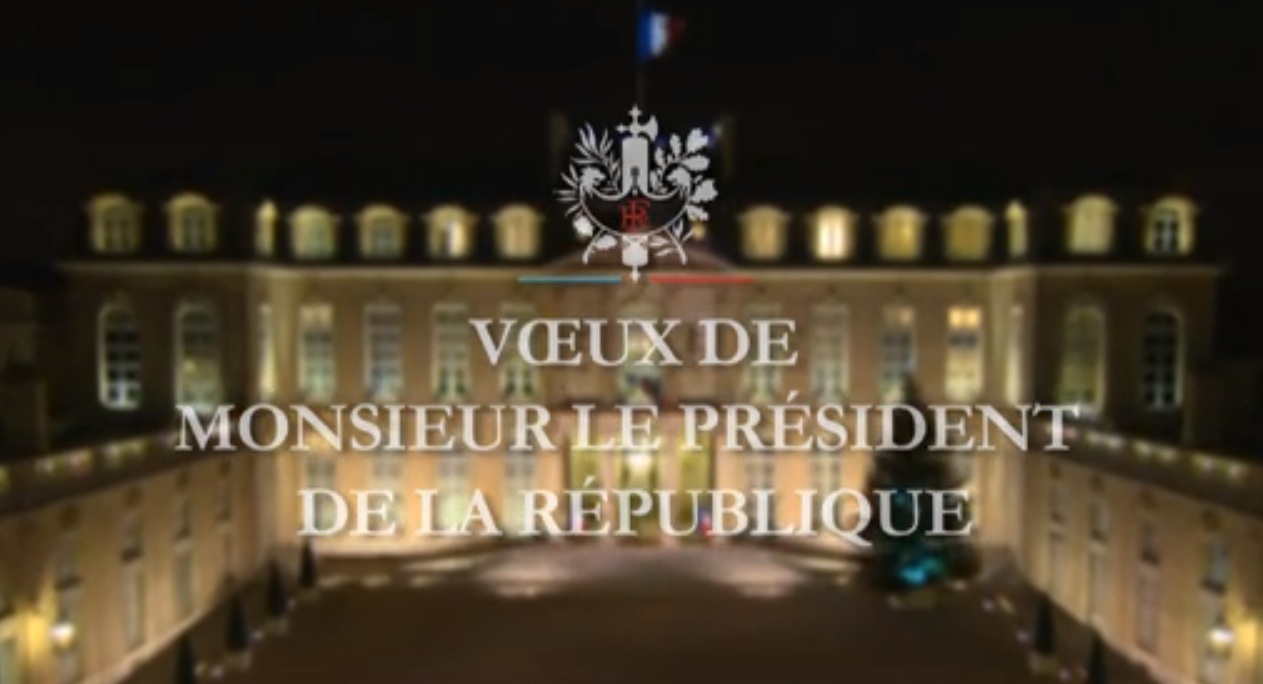 As tradition dictates, the President of France has offered his ‘wishes’ to the French in a ten-minute televised broadcast. François Hollande acknowledged that “the financial crisis has been longer and more intense” than even he could have predicted, implicitly admitting some shortcomings of his employment policies.

He suggested a ‘pact of responsibility’ with businesses, that is, a reduction in ‘social charges’ for recruitment. By focusing on increasing competition within the local market, he appears to be heading towards a more socialist stance, which would restore the fundamentals of the French economy.

These Presidential promises didn’t particularly seduce the Reuters foreign correspondent in Paris, who didn’t foresee a significant improvement in the French economic situation in 2014, nor the French themselves. According to a survey by BVA-Le Parisien, 71% of French people said they were not convinced by the words of François Hollande.

What do you think about lowering taxes in France? 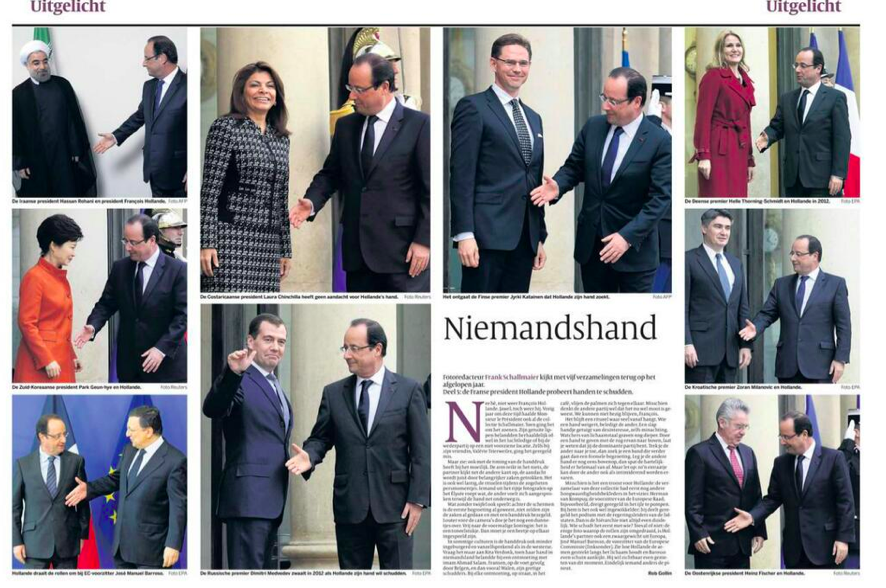 François Hollande is seen offering his hand to fellow dignitaries for a handshake; the pictures are taken several milliseconds before the other takes his hand. The photos date from 2012 to 2013. 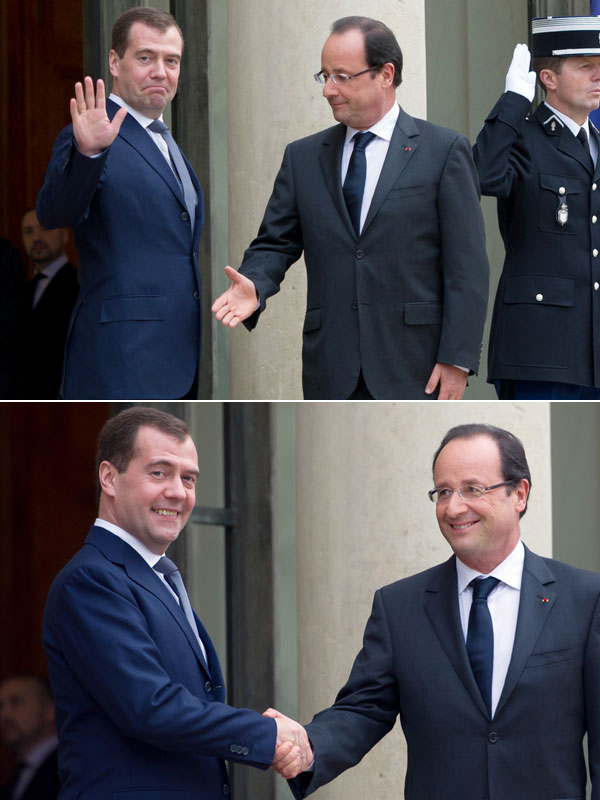 Why would a Dutch journal publish a double-page spread of the French president?

Perhaps to create a ‘buzz’ all over the web, or in other words, to spread viral content in order to increase its social influence. Viral content is an extremely effective way to attract more readers. It is known for this. International media, particularly anglo-outlets, subsequently jumped on the article. Trashy or humorous photos are especially enjoyed by readers of tabloids and content aggregation websites specialising in infotainment.

The article was published on 31 December, the same day that François Hollande gave his speech to the French, probably in order to optimise the spread of the publication. After all, as the Independent demonstrated, it is easier and cheaper to talk about how unpopular the French President is via an image that will immediately understood by a reader, than to analyse and explain French politics.

In France, ‘le droit à l’image’ (the right to control your own image against defamation or misuse) is protected and therefore tabloids are less popular. The position of the President is respected. Such a publication by the written press in France is almost inconceivable.

What is your favourite French newspaper, and why?