Your insider guide to flea markets in France 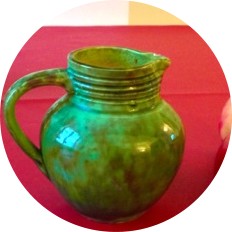 Every francophile who follows Ma Vie Française® knows about the second hand markets (also known as flea markets) in Paris, most notably the Marché aux Puces.

Contrary to its name, this refined market is famous for its precious antiques and collectibles.

But as neither my budget nor my lifestyle has room for rare breakables, I’ve found other flea markets in France hold greater personal appeal. These include brocantes, vide-greniers (literally ’empty attics’) and even French online markets.

They’re all tremendous fun, but the thrill of the hunt at the vide-grenier, a delicious mix of American garage sale and flea market, tops my list.

The secret to successful bargaining with the French

Tips: visiting a vide-grenier is generally easier by car, especially if you buy anything difficult to carry. Bring some tote bags.

Bargaining is perfectly acceptable. Respectful, rather than aggressive bargaining will yield the greatest reward. Most French merchants would rather refuse a sale than accept an insulting offer.

Instead, try asking for a discount if you buy two or more items:

‘What’s the price if I buy two/three/the lot?’

If you’re polite and make a decent offer, vendors are usually quite receptive.

One way to research the France of yesteryear

During my last trip to France, my daughter and I drove one Sunday morning to a popular local second hand market, where the vendors stretched from one end of the parking lot to the next. 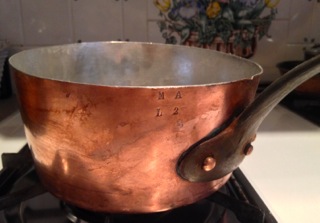 I hit pay dirt at the first table. An elderly woman was offering grandmother’s kitchenware: stoneware mustard pot and cruets, a ‘dripolator’ teapot and vintage faïence.

She gave me a good deal on the lot, and held my purchases while we continued to shop. I found an antique copper pot, initialed to ensure its return from the tinsmith; a copper planter; giant brass utensils hanging from brass hooks; and an exquisite green and yellow glazed pitcher — small snippets of the France of yesteryear.

What not to ask the French

The adventure didn’t end there. A few stalls over I spied an enamel cylinder, which could be hung on a wall. I innocently inquired in French: “Monsieur, qu’est-ce que c’est?” — a planter, perhaps?

In a tone I can only describe as one the French save for the very young or feeble minded, he answered: “c’est pour les femmes, madame, pour se nettoyer a l’intérieur.” 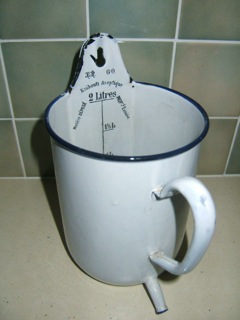 His tone clearly meant: “are you an imbecile, Madame? It’s for feminine interior cleansing.”

Worse, Monsieur took my mortification for complete ignorance, so he began an enthusiastic pantomime to explain himself.

Alas, I had admired a vintage douche or enema irrigator, not recognizing its function. In my defense, the vintage item bore no resemblance to its modern cousins — but still!

Nobody else seemed to think our interaction extraordinary, but we immediately assured Monsieur we understood, and made a quick escape.

I learned a valuable lesson: don’t ask a vendor to identify a curiosity unless you have some idea of its purpose. But don’t let that deter you. The vide-grenier is a genuine slice of France that’s too good to miss.

Have you visited flea markets in France? Share your experience, favourite find, or best bargaining tips with us below.