#Fautesdefrançais are the new black: the French language in turmoil 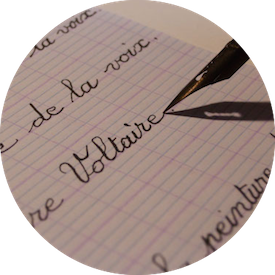 Just when you thought that you could never conquer the French language like a native, an eye-opening new survey comes to light.

Newsflash, Anglophones: three out of four French speakers have difficulty spelling their own language.

The survey conducted by Mediaprism, in collaboration with grammarian Jean Maillet, and author of ‘Langue française, arrêtez le massacre !’, highlights the ‘linguistic crimes’ that the French make everyday.

According to RTL, 73% of those surveyed found their language to be difficult, with 63% of French speakers even hesitating on the correct spelling of plural compound nouns: des choux-fleurs, quelqu’un ?

Tautological faults are aplenty. Many French speakers use redundant phrases such as “au jour d’aujourd’hui” and “répéter la même chose” which researchers claim give the language a bad reputation.

Have trouble remembering the gender of words? Not sure whether you should agree with le passé composé? Forgetting the conjugation of the conditional tense? Rest assured, you’re in good company. In fact, almost one in two natives are making these same mistakes time and time again.

On the other hand, the French refuse to make exceptions for notable speakers in the public eye. Athletes, journalists and politicians are far from excused for their fautes de français. 83% of those surveyed said it was unacceptable for a high profile figure to make such errors, resulting in society second-guessing their right to discourse on a public platform.

Intent on putting a stop to these fautes d’orthographe, a number of grandes écoles, particularly those business and commerce-based, have taken it upon themselves to recommend and require French students to obtain the Voltaire certification.

According to Le Figaro, 82% of recruiters say that spelling and grammatical errors hinder a potential employee’s chance at securing a job, so the motivation behind the exam is well justified. Comprised of a short dictation and a 200-odd question multiple-choice test, candidates have two and a half hours to prove their language prowess.

Just as old habits so often do, language errors appear sooner than tertiary level. At primary school is where these petites fautes start to fossilise.

Speech therapist Françoise Rouillon suggests that when young children commonly make errors writing in French, their mistakes are actually taken from grammatical rules, not pulled out of thin air.

In fact, students are listening in class – they’re just applying the theory incorrectly. When the rules of logic dictate that ‘when you have one verb followed by another, the second will be in the infinitive’, we then better understand why a child would write ‘il a penser’ in place of ‘il a pensé’.

But MyFrenchLife™ correspondante Aline Gouger can point the finger exactly at the responsable. “There are less and less hours used to teach French language at school. They don’t have enough time to learn the complexity,” she says.

So who is to blame for the decline in the language of our dear Molière? 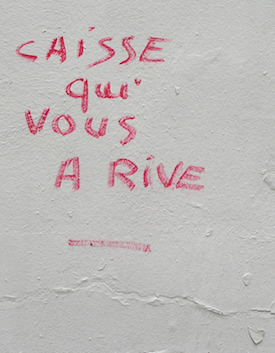 Naturally, spoken language is blamed for the decline of the written word and the constant presence of technology isn’t helping. In fact, tech blurs the lines between the spoken and written word. It has the enormous power to change its users perception of written language; in other words, what is considered correct or incorrect French.

Perhaps the easiest tech tool we can lay blame on is the autocorrect feature on our text messaging applications. Poor autocorrect: while we go about our exchanges ignorant to your subtle changes, we unknowingly adopt you into our day-to-day lexicon.

Littered with abbreviations and acronyms, SMS language corrupts the French language. So when it comes time for our prosperous French to sit written – gasp! – exams, or hand in their CVs, you cannot blame the Académie Française for writhing in agony upon their thrones.

Francophones are armed now more than ever with a heavier arsenal of linguistic weapons to choose from. Look at street speak – a phenomenon evolving from the outskirts of the metropolitan hubs in France, and a powerful marker of solidarity.

Linguistic choices are adapted by French speakers to reflect social inclusion and in-group membership. It’s just like teen-speak: throughout the world, from country to country, language groups define and solidify themselves through their language choices.

It may make teens à la mode, it may prevent their parents from deciphering what they said to their friends. Either way, it’s a form of identity appropriating dependent on a particular social setting. And it’s been blamed for the downfall of French.

Verlan is much the same. While it isn’t used as widely as other sociolects, it too has the capacity to transform the French language – a language which must, as is the definition of a living language, be privy to a constant state of flux.

“My students in the north of Paris spoke a different French and I had to adjust. I learnt many words the year I worked there like ‘ma darone’ for my mother or ‘carotka‘ for stealing.”

Are the French good spellers? What errors do you commonly make in French? Let’s get the ball rolling – tell us below!