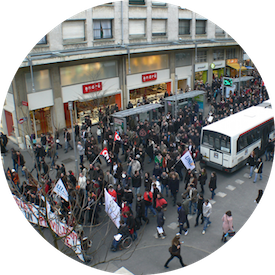 On 25 and 26 June 2015, in the big towns of France such as Paris and Lille, taxi drivers carried out a ‘blocus’, blocking roads and driving at a snail-like speed.

The reason? To protest against the app Uber, and its new function ‘Uberpop’ (also known as UberX in other cities), which allows anybody with a car to charge people for transportation without paying the taxes of a registered taxi driver.

The professional taxi organisations demanded an effective application of the Thévenoud law, which was announced in October 2014. Although this law was supposed to hand out harder reprimands for clandestine transportation activity, it had not been respected, and according to professional taxi drivers, checks were not being carried out frequently enough. They demanded that the government deactivate Uberpop, and they did it using a typically French manifestation tactic.

The blocus has a long history in France, and usually involves blocking an entrance or street in protest against something. Napoleon himself organised a blocus, and although he was not the first, this particular one had significant consequences. 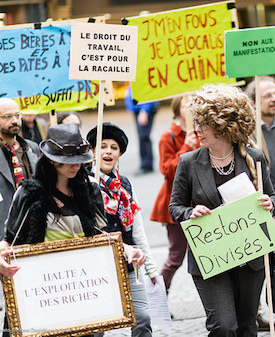 ‘Le blocus continental’ started with ‘La Paix d’Amiens’: a pact between France and the UK, which involved the UK relinquishing its control of the French colonies and returning them to Napoleon, giving his empire the title of strongest commercial and political player in the world. However, the UK eventually attacked the French colonies once more, destroying the French fleet in the process.

In retaliation, to keep the British away from their allies and fight them on a financial and mercantile scale, Napoleon closed the French ports to British merchandises.

Others had also used the blocus tactic in the past to ‘block’ a town or a country. But le blocus continental was different because it operated on an even larger scale – it concerned the whole of Europe. The blocus left the British unable to export and import, which had a disastrous effect on the British economy. British credit lost 20% of its value between 1808 and 1810.

In 2014, approximately 1000 students blocked the entrances to 20 Parisian secondary schools, protesting against police violence after the death of an ecological activist, Remi Fraisse, who was manifesting against the creation of a dam – ‘le barrage de Sivens’ – which would create a reservoir of water to be used for irrigation. He was killed by a grenade thrown by a police officer on 26 October 2014. Bernard Cazeneuve, Minister of the Interior, announced in November 2014 a ban on the use of “offensive grenades” in law enforcement operations.

Similarly to the manifestation of the taxi drivers, in 2015, farmers blocked the roads of Paris, driving at a very slow speed. This was to protest against the reform of ‘la politique agricole commune’, a European policy put in place to control prices, and also against certain costs the farmers claimed were “suffocating their cultivation”, like the increase in value-added tax from 7% to 20%.

Why do the French like to protest so much? 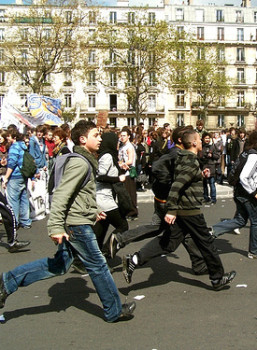 So what is it in the French that fuels their desire to protest and advocate change? Perhaps it has been in their blood since the revolution. France certainly has a tradition of activism – one only has to look at the February revolution of 1848 or the student riots of 1968 to realise this. The February revolution led to a constitutional monarchy and to the creation of the Second French Republic. However, the French workers on strike were not allowed to unionise until 20 years later, when the International Workingmen’s Association was born.

The article ‘Why are the French always protesting? Blame Unions and history’ suggests that France developed a history of striking and activism before a union hierarchy existed to negotiate on its behalf. Zack Beauchamp writes: “Striking was a first resort, rather than a last, and to some extent that’s still in muscle memory”.

Although the blocus is a popular tactic, the French are partial to a large array of manifestation methods, which have previously included vandalising a McDonald’s and spreading straw and cow dung across supermarket car parks.

What can we learn from the French blocus?

The blocus seems like an effective way for large groups of people to advocate change, to voice their opinions and protest against issues they find unjust. Through this tactic, the French show themselves to be politically aware people who fight for what they believe in, and who claim what they believe they are due instead of waiting for their government to give it to them.

The blocus teaches us to manifest peacefully, collectively and respectfully. Next time you want to have your say, why not do it à la francaise?

What do you think? Would this technique work in other countries? We would love to hear your thoughts in the comments below.