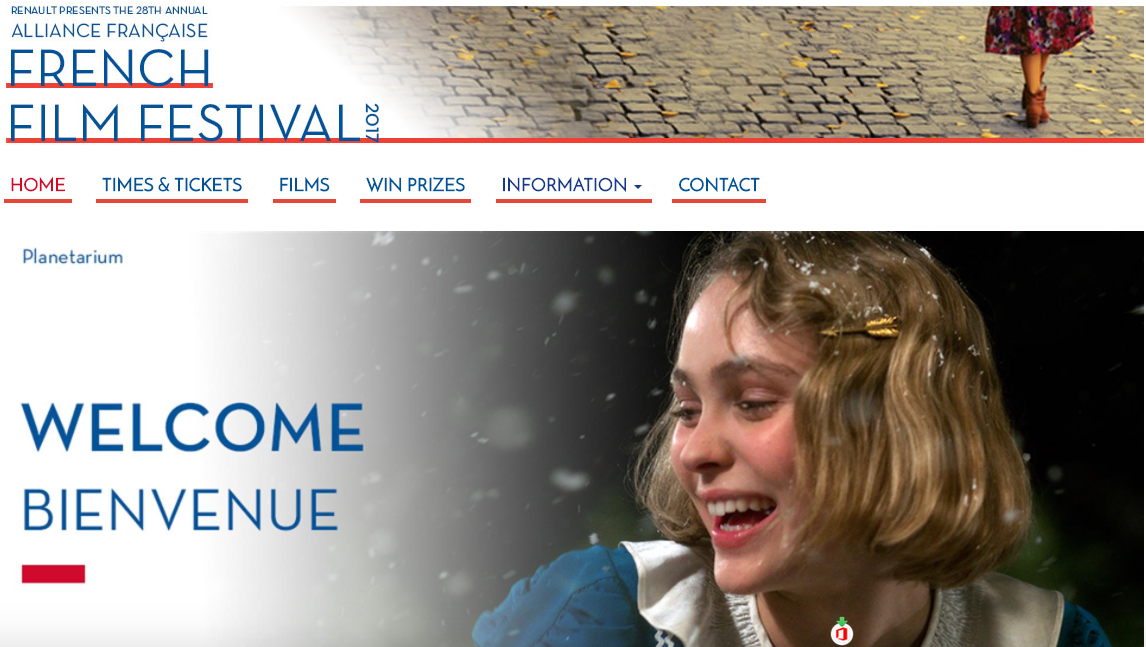 The Alliance Française French Film Festival in Australia is a wonderful opportunity to immerse yourself in a range of French scenarios, from city to country, comedy to history; and hear the language spoken in a variety of contexts.

But not sure what to see?

From documentaries to the indefatigable Gerard Depardieu, there’s plenty on offer. Here are some snapshots, but why not just jump right into the festival and be surprised?

An unusual story loosely based on the truth, of Anne-Marie Fuller, a country girl from the American West who becomes Loïe Fuller, a dancer who ended up a sensation in the Belle Époque cabarets in Paris. French musician-actress Soko plays Loïe, and Johnny Depp’s daughter Lily-Rose is a little wooden as Isadora Duncan.

Recovering from a wardrobe malfunction on stage, Loïe starts swirling her dress and the fluttering fabric gives her the idea to use metres and metres of flowing silk as part of a dance routine. Revolutionary at the time, crowds lap it up and she becomes the toast of Paris.

Her innovative dances get ever more complicated with fabric attached to long sticks, mirrors and coloured lights. Moving the heavy sticks eventually takes its toll on Loïe, and another younger dancer with new ideas, Isadora Duncan, is suddenly the new phenomenon.

Some stunning and beautiful imagery of swirling fabric in the dance sequences and training in the forest, but it would have been interesting to pull back and see more of, and get a feel for, the Belle Époque era as well.

This documentary for me is one of the standout films of the festival.

A young French film crew say they aren’t particularly “greenie”, but are concerned about their kids’ future on this planet. Rather than outline all the problems and the science behind global warming, they look at the solutions – what can be done, and what is being done.

Co-directed and narrated by actress Melanie Laurent (Inglourious Basterds), the crew visit communities and governments all over the world who are providing realistic alternatives to the production of food and traditional energy, including how Denmark has converted its coal plant into a biomass plant. (This could be a solution to the imminent closure of Victoria’s Hazelwood coal mine.) Education and the economy also get a look in.

Based on a true story drawn from the memoirs of a young Jewish French boy Joseph Joffo, this film follows him and his older brother escaping Nazi-occupied Paris during World War II before they are inevitably rounded up and deported.

The film is unusual as it doesn’t dwell on the horrors or the most dramatic stories of the occupation.

Instead, it offers a view of what it must have been like for most of the population trying to escape deportation and live a life still in France but away from the worst of the Nazis. In particular, how two young boys try to navigate their way through their encounters with Nazi officers and convince them that they are not Jewish boys. The film also shows just how much luck plays a part in survival or death. Beautifully shot and great performances all round.

At three hours and fifteen minutes, this is truly an immersive French experience!

It is fascinating to see the history of French cinema through curated clips, but it could do without the director’s (Bertrand Tavernier) own personal story weaved in. Most of us won’t have heard of these films, but what a way to get an insight into the French psyche.

Gerard Depardieu is back, bigger than ever, literally. He doesn’t shy away from showing his huge body in this film.

Depardieu plays a cattle farmer who is trying to convince his son to stay in the business. But the son is more concerned with drinking, having fun and trying to hook up with women, despite his unappealing as he puts it ‘ugly country hick’ appearance. His ten stages of drunkenness monologue is an instructive and entertaining scene.

In an attempt to bond with his son, the farmer takes him on a journey through the wine-growing regions of France, covering Beaujolais, Burgundy, the Rhone Valley, Bordeaux and the Loire.

The French love their physical comedy, and this film follows in that tradition. A bit of fun and farce through the French countryside is a pleasant way to spend an hour and a half or so.

This is a movie with a message, about a lung specialist who fights a large pharmaceutical company over a drug that seems to be linked to patient deaths. Based on the true story of Dr Irene Frachon, who wrote ‘Mediator 150mg: how many deaths?’.

The doctor is hot headed and lacks any strategic skills. Her dogged determination to expose the injustice and stop sales of the drug puts her closest ally offside, as his career prospects are blocked and he’s forced to work in Canada.

The film could have been a bit tighter and shorter, but see it if you like message movies or enjoy Big Pharma executives get grilled in court. At the very least you’ll learn a whole new range of French vocabulary.

Where can I see the 2017 Alliance Française French Film Festival?

For more information on other films showing at the festival, and information on dates and times please see the official Alliance Francaise French film festival website. You can also connect with them on Facebook and Instagram.

Are you going to see any French films during the Alliance Française French Film Festival? Let us know your favourites! Tell us in the comments or on social media.