After asking for your reading suggestions last week, I posted the same question on our MyFrenchLife™ –  MaVieFrançaise® facebook page and the result is that my reading list is coming along well.

Then I came across this video by Vivienne Westwood who says:

If you want to get a life you have to read… You have to invest in yourself.

So, I’m encouraged to continue this discussion and to urge you again to contribute in the comments below.

And here is what Vivienne has to say…

"If you want to get a life you have to read." And switch to Green Energy, of course.

What are you reading?

Just as a reminder…

Here are some Francophile reading recommendations from Shannon Ables of The Simple Luxurious Life. You can click through and buy from Shannon’s site right now if you wish to do so.

And amongst this very small sample, I see a few gems written my some of you! Felicitations.

I came across this list of 11 novels based on rural France – The Local asked authors to nominate their favourite books on France. As a result, there are more than 11 recommendations here 🙂

Anyway, of the 11 novels named, three of them aren’t novels ;), so we’ve added another suggestion to the list (sourced from the Facebook comments on that post) – anything authored by Martin Walker, Anthony Doer or Irène Némirovsky – do you have other suggestions?

“Fred Vargas is my favourite novelist,” says author and comedian Ian Moore.  Moore has also written about life in rural France. Check out his first book – A la Mod: My So-Called Tranquil Family Life in Rural France – here on Amazon.

2. The Debt to Pleasure – John Lanchester

Another recommendation from Ian Moore, this time for a book by John Lanchester. “Food is the essence of France, a reason and method of celebration but also of superiority and snobbishness,” Moore says. “Seen through the eyes of John Lanchester’s brilliant, sinister creation, Englishman Tarquin Winot, this is a mysterious, wonderful ‘road trip’ through France and ‘modern life’ itself. It’s beautifully written and the wicked Tarquin is one the great modern ‘anti-heroes’. “And, it has recipes!”

Author and columnist Samantha Brick recommends this novel from Joanna Harris. Brick herself is no stranger to writing about rural France – find her book “Head Over Heels in France: Falling in Love in the Lot” here on Amazon.

Samantha Brick, clearly a big fan of Joanna Harris, adds that you can’t go past her hit novel Chocolat. “This beautifully written novel expertly weaves scene after scene, combining all of the senses – especially taste and touch – in an utterly magical narrative,” says Brick.

Journalist and author Deborah L. Jacobs recommends this novel by Kristin Hannah. “This tale of two sisters from a fictitious Loire Valley village provides a vivid view of French rural life before and during the Nazi occupation,” she says. Jacobs is the author of the new book, Four Seasons in a Day: Travel, Transitions and Letting Go of the Place We Call Home, about how she quit the job from hell, rented her New York City townhouse and planned to Airbnb her way through rural France.

This book by Stephanie Dagg is a must-read, says France-based author Vanessa Couchman. “She and her husband and school-age children moved from rural Ireland to even more rural Creuse, a department in central France, where they started a fishing gite business,” she says. “The book relates the experiences of their first two years with humour and realism. Check out Vanessa Couchman’s blog, Life on La Lune, here (where you can find out about her most recent novel The House at Zaronza, set in early 20th-century Corsica and at the Western Front during WWI.

This 2002 book by Geraldene Holt “gives you a real flavour of village life in the southern Ardèche”, says Sheila Milne, who has previously written about the best books set in France. “… it’s more than just a gardening book, much more, because of the beautiful descriptions of life in France accompanied by intriguing snippets of information about the uses of herbs.”

8.  Seeking Whom He May Devour – Fred Vargas (again)

Another book by Fred Vargas, also recommended by Sheila Milne. “My second choice is a complete contrast to the first.  It is a crime novel by Fred Vargas who normally sets her books in Paris. The setting here though starts out in a village in the Alpes Maritimes where there are rumours of a werewolf on the loose. A woman is murdered and Commissaire Adamsberg comes to investigate,” she says.

The 1954 classic by Françoise Sagan can’t be missed, says journalist and author Helena Frith Powell. “At once tragic, beautiful and evocative, it’s written very simply but with an incredible, almost cruel insight. “Plus it’s the perfect holiday read as it’s set on holiday in the south of France.”

This 1930 book, penned in French as “Regain” by Jean Giono, gets the hat tip from fellow author and history buff Stephen Clarke. “This is the opposite of the twee visions of ‘la campagne’ presented by relocation programmes on TV,” Clarke tells The Local.
Stephen Clarke’s own comic take on French rural life features in his novel Merde Actually. His latest novel is the more urban Merde in Europe.

And lastly… Let’s face it, if you’re going to read books about life in the French countryside, then you may as well start one of the most well-known of all. This 1989 bestseller by Peter Mayle – which describes the author’s time in France after an advertising career in London – helped push “stranger in a strange land” books back onto bookshelves worldwide (and especially the books about France). Author Stephen Clarke said this “really well-written book” actually served as the “counter inspiration” for his “Merde” series. “That book was about the south of France, it’s all sunny, it smells of lavender and olive oil, and all the peasants are quaint idiots. In my experience, in Paris, it was the opposite,” he said. 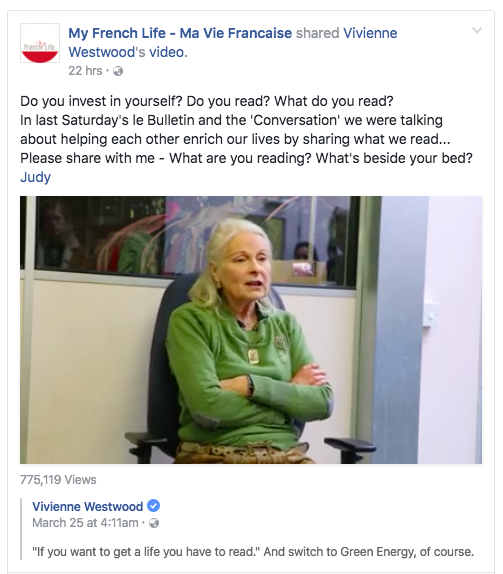 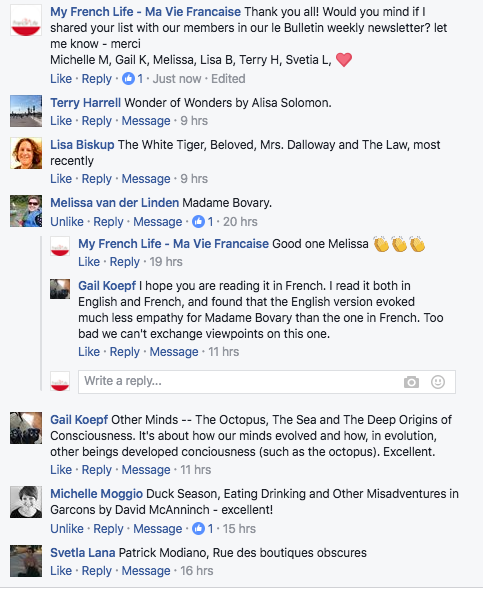 Do you have other reading suggestions? (in the comments below)

And do you read ‘en francais’?
Then please join the conversation with Jessica and other members and share your views, experiences and advice.

Until next le Bulletin on Saturday – au revoir

If you missed any of the recent ‘Conversations’ you can play catch up here and now!