This article was contributed by reader-member Ulysse Pasquier: French, currently living in the UK. Merci Ulysse !

You too can provide the occasional article or suggest article topics as a member of MyFrenchLife™ – MaVieFrançaise®.
You can submit content & join the conversation in the comments section below.
To become a member make sure that you sign up! See the red button top right of this site.

With the election of Emmanuel Macron, France has entered a true political revolution that had been brewing for months, if not years. ‘Revolution’ was the title of the 39-year-old’s book in which he laid down his vision for the country with the launch of his new movement En Marche! (Onward!).

The choice of title seemed a little presumptuous at the time. After all, France has had its fair share of revolutions.

And yet, in electing someone without a membership card from either of the two main historical parties, the French people have thrown their country into a state of unprecedented uncertainty – the kind of chaos reminiscent of any significant upheaval.

After Brexit and the election of Donald Trump in the past year, liberals can finally rejoice.

For once, the growing wave of protectionism has crashed down in a western democracy – and it’s not all bad.

Marine Le Pen very much embodied the same rejection of the status quo that we saw in Britain and the United States. She undoubtedly felt emboldened by Trump’s success and employed some of her fellow blonde’s… let’s say, ‘unconventional’ tactics. 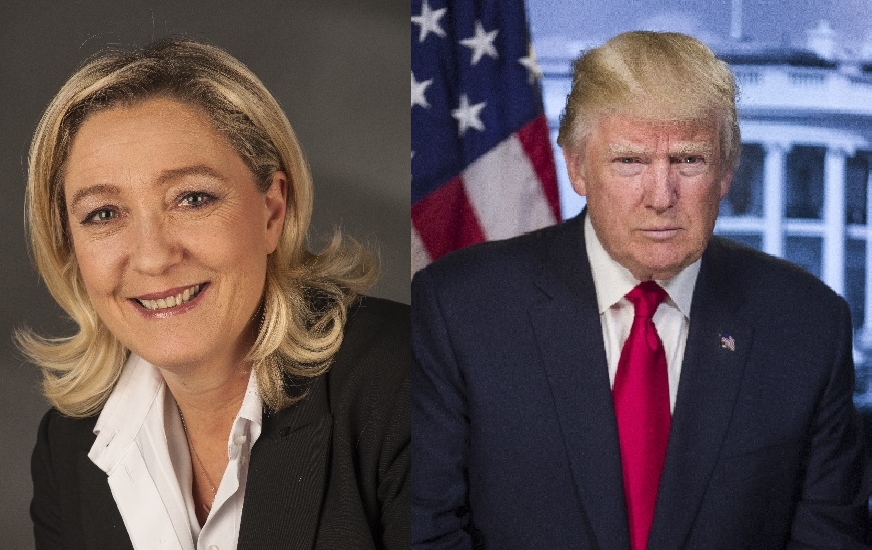 However, there is a point here that is often overlooked and will be important to learn from.

Macron was also born out of the rejection of the same system. Where Macron’s position is groundbreaking, is in that he translated this rejection into an internationalist, inclusive and optimistic voice.

It’s not difficult to see that France has entered a new era. Leaders of the French political class did not waste time in calling for arms as soon as the En Marche! candidate’s victory was announced.

Leaders of the French political class did not waste time in calling for arms as soon as the En Marche! candidate’s victory was announced.

The stakes are high with the crucial legislative elections coming up in just over a month. Each party must hurriedly gather the pieces of an imploded voter base.

Indeed, for the first time in France’s Fifth Republic, the two traditional parties were not present in the second round of the presidential election.

This represents a historic shift that goes back even further than the dawn of the Fifth Republic.

The concept of the political left and right originated from the French Revolution in 1789. The King’s supporters would sit to the right of the President of the Assembly, while deputies favourable to the Revolution took their seats to his left.

Today, both the Parti Socialiste and Les Républicains are in a state of disorder, leaving the door open for a wider range of voices and fresh ideas.

This rejection of the traditional political system follows the same trend set by Trump’s election. In the US, when presented with Hillary Clinton – the system’s champion and prime benefactor – voters preferred to opt for the unknown. And what a scary unknown it was.

While President Trump is now a different beast, it wasn’t clear during his campaign if he actually believed in Republican fundamentals. If not for the US’s deeply rooted party finance structure, Trump could have represented a new movement: ‘DONward!’

That wouldn’t have hurt his ego…

The point being, that he wasn’t part of the binary Americans typically have to choose between. In search of a new political identity, France has fought the same battle.

The power of good ideas

A succession of disappointing governments from either side highlighted the flaw of a bipolar system. What was once a logical dichotomy evolved into an exclusive tribal organization of ideas?

If passing a vote, on the basis of anything else but party lines, is just as likely as Real Madrid and Barcelona fans embracing, then we’ve got a problem.

The left and the right were becoming increasingly narrow boxes to fit in, boxes within the limits of an artificially defined political identity. With the 2017 presidential elections, France saw the breakdown of these boxes and Emmanuel Macron was the most apt to take advantage of it.

Macron not only identified this rejection at an early stage, he made it an integral part of his movement’s definition. It was visible at every level of his campaign.

It was there of course in his desire to pick ideas from different sides of the spectrum, bringing them under the ‘progressive’ umbrella. But it was also there in the details.

Macron was mocked at the first presidential debate because he seemed to “always agree with everyone“.

His repeated use of the phrase “en même temps” (“at the same time”) was picked out by his critics and he turned it into a – rather corny – chant for his speeches.

Macron’s success suggests that the French approved of this, sometimes difficult to pin down, but more nuanced, approach to politics. Perhaps his most significant message in rallying a majority of voters was that it is fine to disagree.

With Le Pen’s seeming desire to emulate Donald Trump, it would be easy to say that Macron took on the role of Hillary Clinton. However, that would be a mistake.

Macron offered an alternative to the old system, where one’s entire reasoning could be predicted, based on their position on a single issue. He showed that people can’t be categorized into boxes, or baskets (of deplorables!) for that matter.

All the time until his victory speech, Macron reiterated the Obamian plea: “

don’t whistle [at his opponents, or their followers], you don’t bring people together with whistles 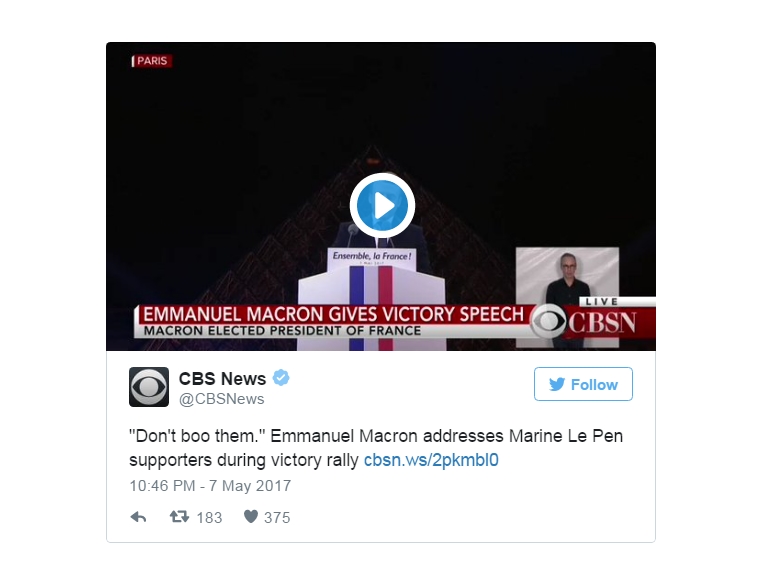 We have here a paradox: how can a former investment banker, educated at the same elitist institutions as many of his predecessors represent a break with the system?

Change can come from within, and by restructuring the political scene, it appears this is what the new young President is trying to accomplish.

It remains to be seen whether Macron’s success to date is due to his actions and not simply the result of a masterful communication. The next five years will answer these questions.

However, through his message and rhetoric alone, there is hope for the start of something new.

Do you agree that Emmanuel Macron was the right choice for France? Are you hopeful for France’s future with President Macron? Let us know your thoughts in the comments below.