No, it’s not Catherine Deneuve, the iconic French star but the Hôtel de Crillon at 10 Place de la Concorde that’s about to be under the spotlight. After a four-year renovation, the official re-opening day is July 5, 2017.

And as for la Deneuve, I’ve been seated next to her at my manicure parlor and I can assure you that she’s a natural French beauty, not pulled at all, as some catty people claim.

Hôtel de Crillon: feel like a princess in a French Palace

Did you ever dream of a sumptuous dinner in a French palace? I did.

I lived in Washington DC a few years ago and was planning my 40th birthday celebration. As a true Francophile, there was only one place I dreamed of – Les Ambassadeurs restaurant at the fabled Hôtel de Crillon. 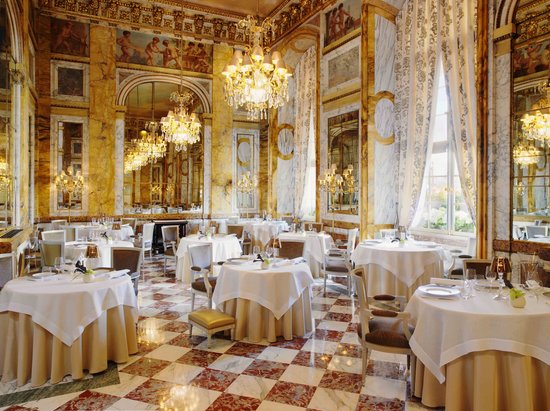 A few years later, I served on the founding committee of The American Friends of the Musee D’Orsay (AFMO ) and at that time a benefactor attending the inaugural gala invited our committee to a tea party in her suite at the Crillon.

Let me tell you, it looked like a mini Versailles. She took me into her boudoir and opened the closets: “Look! I have more space here than in my mansion in Palm Beach or my penthouse in Chicago!” she exclaimed.

She didn’t rave about the exquisite antiques or the crystal chandeliers, but the thing most dear to many of our hearts—closet space.

The Hotel de Crillon has kept its facelift hush-hush.

Why? Were they staying true to the discretion that’s typical of French etiquette?

My attempts to question the P.R. people resulted in being told: “There’s an embargo. Employees are forbidden to disclose anything until the opening.”

So, why the facelift?

There were several reasons for the renovation, but mainly because the fabulousness of the Crillon didn’t qualify as a 5-star Palace under new guidelines of the ATOUT (the French Tourist Authority).

The designation ‘Palace’ was established by the French Minister of Tourism in 2010 and was designed to award recognition to the finest 5-star hotels. They must have exceptional qualities that embody French standards of excellence and contribute to enhancing the image of France throughout the world, according to the official announcement.

1. The Crillon lacked two facilities: a spa and a swimming pool.
– The new underground pool was an engineering challenge and a regulatory nightmare.
– The spa seems to me a good place to fight off jet lag. Called the ‘Sense Spa’ it’s a “luxurious environment for beauty, wellness and relaxation”, according to Rosewood Hotels.

2. And the Crillon was experiencing competition from other new 5-star hotels, especially the recent invasion of the Asian brands, The Peninsula, Mandarin Oriental and the Shangri-la.

There are now many choices of luxury hotels in Paris since this is the most visited city in the world.

The Hôtel de Crillon is where generations of movie stars and the jet set have stayed – it has witnessed so much history:
– Three of its salons, one where young Marie Antoinette took piano lessons, must remain untouched according to French law.
– The Place de la Concorde saw the bloody guillotine set up during the French Revolution.
– The League of Nations was born in the Crillon after World War I when the leaders of The Big Four met to shape the new world order.

While trendy French boutique hotels are attracting guests, there’s still a frisson to staying at the Crillon.

There are 124 rooms and two sumptuous new suites designed by Chanel’s Karl Lagerfeld, an expert on the 18th century.

Sleeping here is a splurge.

Room prices begin at 1,270 euros per night including breakfast.

I figure if that’s not in the budget, why not enjoy the ambience by taking tea, having drinks in the lounge, dining in the chic restaurant or the more informal brasserie?

Have you ever visited the famous Hôtel de Crillon or are you planning a visit to see it as the new ‘Palace’? Share your comments & experiences in the box below!