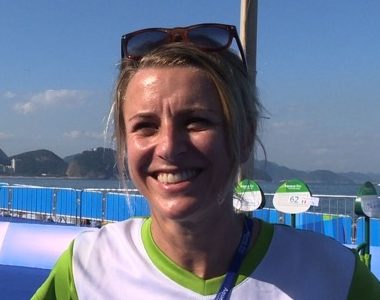 With her work ethic and genuine outlook, Delphine Moulin has been successful on the other side of the world and doing it all with a smile. She ignores the opposition and stirs up enthusiasm.

As a former athlete competing in volleyball, tennis and golf – all at a national level – she knows a lot about sport: protecting its values, carrying its message and embodying its spirit.

“When Carlos asked me to leave for Rio, I took some time to reflect. It meant I had to leave Paris, put my agency MLM Consulting on hold, and set off on my own to the other side of the world to what I knew would be an immense adventure.”

Being an entrepreneur, and inevitably tempted by the challenge, Delphine Moulin was convinced that organising the Games for the first time in South America would offer the opportunity to reaffirm the universal and humanist values of sport.

The events which hit France on 13th November 2015 really struck me as a warning sign. I believe in the influence of sport, the power of its message, and its universality; giving it the ability to brighten the world.

So Delphine Moulin landed in Rio, learned the language, adopted a new lifestyle and accepted a challenging mission that’s little known among the general public: the test events. In other words, thinking up, designing and coordinating the 44 events which test the setup of the Olympics and Paralympics, and the teams and processes between the Comity, the government and private partners.

The test events were launched in July 2015 and saw the French victorious in a volleyball match against Brazil. Delphine felt the first thrills of the Games.

Over ten months leading up to the arrival of the Olympic flame the following August, 7000 athletes, 2500 referees and 13 000 volunteers were living in Rio.

“Ambition is there to test us all together. We are going to make mistakes, and we are all the better for it!”

The project was complex but the ‘foreigner’ gritted her teeth and in the end summoned all her energy. Delphine Moulin’s aim was to create a dynamic collective, to drive politics, the public and schools, and to raise the spirit of the Olympic Games. 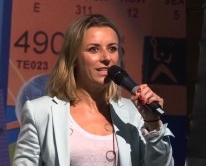 “The Brazilians have an exceptional sense of hospitality and the atmosphere of the 2016 Olympic Games was so magical, colourful and animated because we worked to incorporate the Brazilian spirit.

Organising the test events was like running a huge machine on a small budget. We replaced money with creativity and a search for meaning.

For the first time in the history of the Games, the budget was truly constrained, which naturally made us go back to the main point; the human dimension, the true meaning and the experience, without ever giving up on the athletes for technical and logistical perfection.”

When the flame arrived in Rio, the people of Rio lit up the world, proposing an Olympic Games filled with happiness, festivity and warmth; a true representation of the Brazilian people.

And the foreigner succeeded in her big gamble to leave her life in France behind.

Did you follow the Olympic Games in Rio? Do you agree that sport that can bring people together? Let us know what you think in the comments below.

[This article was originally written in French by Author: Astrid Renoult ]

This collaboration enables you to read this series of inspiring life stories in French (links below) and in English here on MyFrenchLife™ – MaVieFrançaise® magazine and also to visit midetplus.fr for further inspiration.
We hope that you enjoy it.