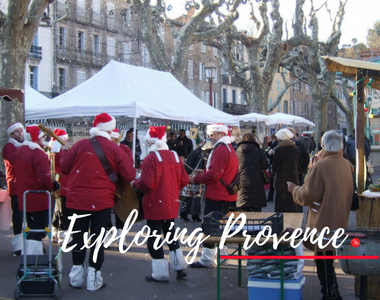 Exploring Provence: Christmas in the Var

We have only spent one Christmas in Provence. As an Aussie, I prefer the traditions we have carved out in the southern hemisphere. But having also lived in the UK, and putting aside the cold, I can appreciate the spectacle starting late afternoon as the lights come on illuminating the towns and streets and houses with sparkling decorations to cheer the darkness. And of course, it wouldn’t be Christmas in Provence without a Provençal gros souper.

It wasn’t particularly cold for our Christmas in Les Arcs-sur-Argens, so the town got together and manufactured some snow that floated through the central square during the annual Christmas market. The forecourt of the Mairie (Town Hall) was filled with tiny Christmas trees and Père Noël (Father Christmas) was set up to welcome delighted young children who each received a present.

Meanwhile the town’s band, all dressed in Father Christmas suits, played recognisable carols and others that I didn’t know, but have since learned are either distinctly French or Provençal. The plane trees that grace the square with their leafy shade in the summer had all been pollarded and looked like fingers reaching to the sky. The streets were illuminated and the donjon (castle keep) that towers above the town bore the words ‘Joyeuses Fêtes’ for the holiday season.

Le gros souper or big supper (which is followed in Provence by the traditional 13 desserts) is still a strong provençal tradition on Christmas Eve and is a huge family affair before midnight mass.

The 13 desserts represent Jesus and the apostles (who actually were not around at the time of his birth!) and comprise dried fruit and nuts, quince paste, biscotti, nougat, bûche de Noël (Christmas log), pain d’épices (spiced bread), and other small delicacies.

Sadly the year we stayed for Christmas, we turned up at the church just before midnight – along with a Norwegian couple who also have a house in the town – to find it had taken place at 6pm! We still don’t know why.

Tradition has it that after the gros souper, the tablecloth is not entirely cleared of crumbs or leftovers following the meal. It is left overnight and on Christmas Day, the four corners of the tablecloth are brought together and it is picked up (a bit like a sack) and the crumbs of the gros souper are then shaken out into the field to ensure a good harvest the following year.

Mind you, I didn’t see anyone do this – it’s more a rural tradition than a town one, I think!

Have you ever spent the festive season in France? What were the typical Christmas traditions of the region? Join the discussion in the comments below!