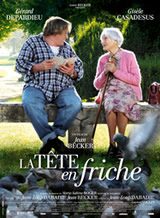 … Last week, groups of intrepid members of French groups around town braved exposure to dangerous levels of culture at the Melbourne French film festival. One such group* saw “My afternoons with Margueritte” at the Balwyn cinema.

The film turned out to be touching and often funny. It was so uplifting that many members of the audience clapped the end.

The story revolves around an unlikely friendship that develops between Germain (Gérard Depardieu), fifty and barely literate, and Margueritte (Gisèle Casadesus), a little old lady passionate about reading. The two are brought together in a chance encounter by their mutual interest in the pigeons at the local park. Germain learns some valuable lessons about life through the books Margueritte reads aloud to him. Ultimately, it is he who reads aloud to her as her vision fades.

Larger than ever, (possibly the size of two men), Depardieu has reportedly been described as, “a rather attractive truck”, by the late author Marguerite Duras. He’s been in more than 100 films.

A real bonus of the film was, for me, discovering the actress Gisèle Casadesus, who is 96 years old and still very active (she was in four films last year). Mme. Casadesus has been in over forty French films, numerous plays and several TV series. She was perfect in the role of the articulate Margueritte, passionate about reading, so delicate and frail, nonetheless able to walk confidently in her high heels through the park. I particularly liked that she spoke French very slowly, making her dialogue almost understandable.

It was also a great introduction to French writers, with Margueritte reading sections from Albert Camus’ La Peste and many other works of literature. The film is based on the book « La tête en friche » by Marie-Sabine Roger, which translates as something like “fallow mind”. It made me want to try and read the book, to find out more about the many French writers mentioned in the film.

My only quibble with the story was the fact that Germain, fifty, overweight and considered by most as the village idiot, had such a young, pretty, loving girlfriend, Annette (Sophie Guillemin).

The director, Jean Becker, managed an emotional ending without being overly sentimental.

… And before I finish I would like to say ‘thank-you’ to the other members who saw the film with me: Pat, Robert, Margie et bien sur Ross.

Photos and film trailer can be viewed here .   And if you’re feeling up to a torrent of French, there’s a short interview with Gérard Depardieu and Gisèle Casadesus about the film: click here . Acknowledgement and thanks for image, trailer and interview source.

* Our group is – Ville de Melbourne – My French Life™.  We are a group of 500+ members who gather frequently (~6 times per month), socially to immerse ourselves in the french culture & the french language.  You can find us and join our group in two places: www.Mel.MyFrenchLife.org and here for french conversation www.meetup.com/frenchinmelbourne. Everyone is welcome…

I have pleasure in introducing Sue Williams. Sue is an active member of our Melbourne Group and this is her first article published on our site. Please join me in welcoming Sue by adding comments about her interesting article and interacting with her!