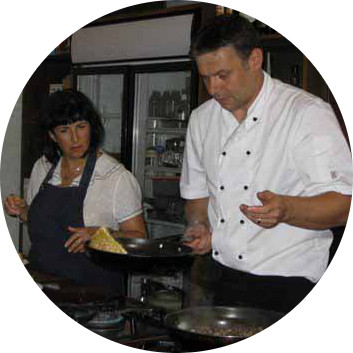 … it can be a serious business.

In France, play ‘cache-cache’ is a children’s game. In Melbourne, ‘cache-cache’ (in English – hide and seek), is something around which the town is building its distinctive reputation, with its hidden pubs, laneways and music hot-spots attesting to its intriguing soul.

I ended up in a laneway in Prahran one night – the result of an invitation to take part in something billed as “very special, extraordinarily delicious and lots of fun”. An invitation like that doesn’t too often appear in my mailbox.

I have to admit that the outside of the building at number 37, Thomas Place initially looked unprepossessing but my doubts were soon left on the doorstep because stepping inside was like stepping into the proverbial Aladdin’s cave (but more of that later). What followed was an opportunity for a group of friends and myself to cook with Sebastien Piel of the French cooking school Dish du Jour. Sebastien’s unique school, located in an extraordinary design studio, Atelier, was worthy of a revisit – it is truly an exciting place. What strikes you when you are here is the cultural and artistic ambiance- the fusion of food, culture and art, which is very Melbourne. A fabulous kitchen, the superb furniture as art and the eclectic collection of Nordic skies, a bicycle, a red Italian scooter (reminiscent of Audrey Hepburn Roman Holiday), a 50’s radio, to state just a few items and not least of all, an enormous screen painting – a copy of the painting  “The Banquet of Cleopatra” by Giambattista Tiepolo. (The original is in the NGV). I can’t help thinking how appropriate it is.

I stopped by later that week in order to speak Sebastien him on behalf of My French Life™ and learn something of his journey from a farm in Normandy to a secluded laneway in Prahran.

Let’s start our discussion, Sebastien, with a little about your background.

Yes, well I come from Normandy – a very little town in the country – and that was good because I lived on a farm and the produce (les produits de terroir) I used when I was young came from the farm. It really was beautiful – and made me strong now (laughs).

I chose cooking because my father was a chef as well but a little different, un traiteur (caterer) who cooked for large receptions – somewhat more rustic.

So in a sense those early experiences in Normandy on the farm and with your father were great influences?

Oh yes! I saw my father cook with organic products. We lived near a farm, which had cows, and in the morning I picked up the milk, the hot milk and you could see the cream on the top and my moustache was beautiful (laughs)…there were also lots of lambs, chicken and ducks. The animals were very fit.

So a perfect environment for a young boy, a young chef to grow up in, ultimately destined to work in the world of gastronomy?

Yes but at 13 or 14 years of age at school I had to decide what to do. I thought of being a veterinarian but then I saw the number of years at school and said, no, no, that’s not for me. But on the list I saw something I loved and applied for the school in Grandeville which was a cooking school only second to that of Lausanne in Switzerland. Afterwards I attended another school to learn management and it was there that I realized I liked teaching – helping others who hadn’t as much cooking experience as me.

So you had a natural ability as a communicator?

Oh yes, in fact I thought that when I was older it might be a way of giving something to people.

So, that’s where the seed for your current business was planted?

But you probably won’t believe it but I was quite shy then.

[True, this is very hard to believe as Sebastien has, without doubt, a very BIG personality.]

“I realized I liked teaching – helping others who hadn’t as much cooking experience as me.”

Ah oui! But I wanted to improve my English so I worked in London. When I arrived there I loved it so much. It was beautiful timing. I was young. There was a great music scene. I worked at a French restaurant, La Bouchée.. but my English wasn’t improving because I was working in a French restaurant each day and living with my French friends.

(Laughs) Well yes…you had no chance!

Yes, but I had to make progress because I met my future wife who was Australian and well, love is good, but you need to be able to communicate at some point! So, my English improved, I worked in a number of good restaurants but after nine years there we felt we were too old for London.

We came to Australia. For me it became a question of balancing the work that I loved with lifestyle. It was then that I thought back to the idea of years earlier of helping people to cook. Initially I started in their homes. I was a sort of nomad but then I found I needed my own kitchen – a base. A friend introduced me to the owner of Atelier here where Dish du Jour is now located. Sebastien: The amazing thing is that the kitchen was originally made for the artisans who work in the workshop so they could all eat together. I recall that in the evening, when we were cooking and listening to the music among the collection, there was quite a magical feel.

So now, tell us a little about the cooking school concept.

Well last week I had a girl contact me and ask if the classes are very strict and I replied no, that the people are here to have fun. They get and understanding of the basics of French cooking, whilst listening to music and having a glass of champagne. That’s important because you want to take away the stress and leave the pleasure. People feel shy because of technique, they don’t have confidence. I tell them to stand near me and I’ll give them a kiss and it will all be wonderful (laughs). The emphasis is on fun and the experience. There are three or four 3-course menus from which to choose for the cooking course– what is the thinking behind those?

The menus are designed around the type of French food people like. Each is based on different techniques, so that you learn quite a lot about French cooking from those menus. (I like to change them every 6 or 8 months for people who like to come back). For people seeking something even more advanced, they can come and talk about this with me and we can work out a menu.

[And finally they get to sit around a beautiful table to and eat. I recall that was a delicious bonding experience.]

“Some people come to share a special experience, to celebrate a birthday and there are also families who want to have fun together.”

Sebastien, who are the budding chefs who come to enjoy the Dish Du Jour classes?

Well let’s see – we have women who have a little more time now to enjoy new experiences. There are young professional women…who have had enough of ‘take-away’ or who have missed out on learning cooking from their families. Then you have the guys – 40% are guys and more and more are coming. I think men really want to learn to cook today. Some people come to share a special experience, to celebrate a birthday and there are also families who want to have fun together. Finally we have companies such as the ANZ, whose staff comes as a group – sometimes returning a number of times.

So I’m sure that when you work with people things don’t always work out as you imagine. Can you share an anecdote of two with us?

Absolutely. I’ve learnt that when you are cooking with people you have to be precise e.g. in relation to time. Only recently I said to one person when she was making the soufflé, to melt the cheese and then put that to the side. I was focusing on a few other people during the preparation of the three-course meal. When I came back I noticed the person was mixing and burning, mixing and burning, mixing and burning and in her defense she told me I hadn’t asked her to stop. So I’ve also learnt a bit. But I ask myself, why, when people see something is burning, they don’t take it off the heat? Well, perhaps Sebastien that is a metaphor for life for some people, where, In clear evidence of their actions causing a crisis, they continue in the same manner, but expecting a different outcome.

A bit of philosophy…how French!

Sebastien, thank you for sharing the creation of Dish Du Jour with My French Life.™ My taste buds are already excited in anticipation of the class in July.

What’s your preferred way to learn French cuisine? Have you tried a French cooking class? Share your experiences in the comments below.