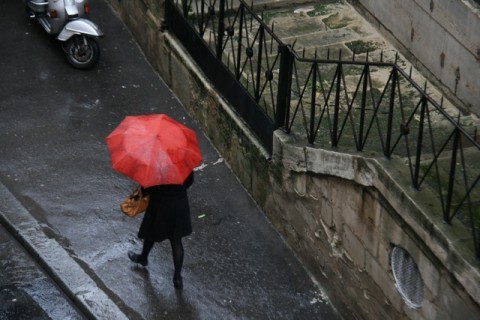 In 2008, shortly after I began ‘Paris Through My Lens‘, a photoblog of the city that j’adore, my readers noticed that my camera seemed to be drawn to all things red in Paris.  That began a little series I named ‘Paris Rouge’.

Since then, I have posted more than 50 images.  This summer I compiled many of my favorite images in a book that I published through Blurb, titled Paris Rouge Through My Lens.  I am pleased to be able to share some with you here on My French Life™.
The morning we arrived in Paris, January ’11, I opened the windows and spotted this lady coming down the street.  To get this shot, I had to stand on the window sill and lean out. The Palais Royal might just be one of my favorite spots in Paris to take photographs. On this rainy day, two delightful boys were having a grand time amongst the columns. I was thrilled that one had worn a red coat. I shot these from a long way off but I still caught that tongue! A wet, grey day in Montmartre was brightened by this lovely lady descending the stairs in her red coat. Merci Madame! I love Paris when it drizzles, especially at night. A long walk home last January provided me with this nice shot. The red taillights were perfect for my series!