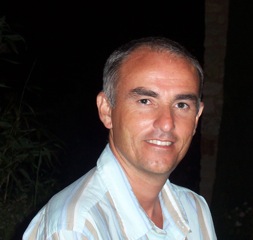 Hervé Salgado is a sculptor, and more importantly a family man. He graciously accepted me into his home on a chilly fall afternoon for a cozy, fireside chat. Warmth emitted in his home, not only physical heat, but his pleasant embrace of the world. It was a welcome discussion, especially considering a temporary heating malfunction in the rental gite.

Thank you Hervé for taking the time to talk to me.

Hervé, can you describe your family?

Hervé is the second child in a family of four. He was born in Paris, and continues to live there with his own family. His parents were Spanish by birth, his dad from Madrid and his mother from the town of La Coruña.  In the early 1960s during the Franco years, his parents were compelled to leave their native land and move north to Paris. The City of Light provided a unique environment and strong foundation for the future world he would come to know. Hervé worked many odd jobs as a teenager and young adult, including selling record albums and spinning music in a Chamonix ski bar.

Today, Hervé and his long-time companion Corine are parents to three incredibly artistic and talented children. This is one dynamic, smart, chic Parisian family.

What three words would you use to describe Hervé Salgado?

I have had the pleasure of getting to know Hervé and his family over the past several months, and my words to describe him were not too far different from his own. He chose “famille”, “amoureux” and “joie de vivre”.  It is a pleasure to be around Hervé and his family because all three of those words are a constant theme in their life. There is a love of life, a strong family bond and a real delight in making others happy. To exemplify this, Hervé wears a massive smile wherever he goes.

How did you start your career as a sculptor?

Like many things in life, becoming a sculptor was not planned. Hervé is a romantic. With a strong desire to celebrate and commemorate the birth of his first child, he searched for the perfect canvas. The idea was to find a birth gift to present to Corine. He admits that he knew little about art at the time but wanted to buy a painting of a virgin cradling the infant Jesus, to celebrate the birth of a baby girl. He found one, which still hangs in their home in Paris.

That was twenty-three years ago. One thing led to another as he connected with the local artistic community and made some new friends. Encouraged by such a creative type, Hervé found himself at the foundry one day holding his first piece. He admits that it was quite basic and simple, but it was the inspiration that launched his career.

At one stage, their beautiful Paris home was so filled with Hervé’s pieces that a friend suggested he might want to sell some of them. The first piece to be sold was a pendulum. Shocked, that not only was there a market for his art, he was also surprised how quickly that first piece was sold. Soon as an emerging artist he found himself with a ten-day exposition in the Grand Palais, in Paris, and many galleries interested in representing his pieces. 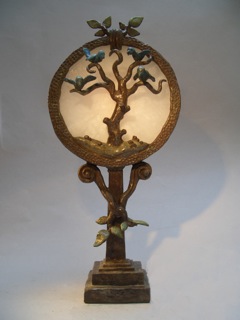 How have your pieces changed over the years?

Originally the works evolved as a result of his desire to recognize the happy occasions, and celebrations of family life as his kids were growing. Hervé says his sculptures at times were filled with animation and exceptionally long titles. In the early years, most of his works included human figures and traced the life of a family. Over the years, this has evolved towards a reflection of nature and more of a botanical focus.

Hervé and his family live an urban lifestyle in the French capital city but often enjoy rural surroundings in Normandy and Provence. It is those peaceful rural encounters, away from his workshop and the city bustle that often give him the inspiration for new pieces. Hervé has done a series of beautiful lamps with bullheads, inspired by summer festivals and abrivados in Provence. His recent pieces include lizards, mice, fig left along with other flora and fauna.

How do you create a bronze?

It is in his workshop where Hervé starts a new piece. Usually, he gives birth to his initial ideas by working wax with his hands, and develops them into intricate models. When the wax design is finished, a special plaster (plaster insulation which is resistant to high temperature) is poured over the object. Once the plaster becomes hard, it is placed into an oven for two days to a temperature of 700 degrees. While the cast is in the oven, the wax on the inside will melt and disappear. After two days, the plaster is filled with the molten bronze at a temperature of 1050 degrees. The piece is left to cool for 24 hours, and then the plaster is broken to expose the bronze that is inside. The final work is that of trimming, chasing, and patina.

He made it sound easy!

Where can someone find your work today?

Currently, four galleries represent Hervé’s work, two in Paris, one in New York and one in Germany. His pieces range from small sculptures, to lamps, tables and other decorative pieces. You can see some of his work on his website.

A lesson in the pathways of life. A “musical career” as a young adult selling records and spinning tunes as a Chamonix based disk-jockey, evolving into an accomplished sculpture selling sought-after bronze pieces through major galleries. Hervé’s has attained stature and respect in his chosen field. Today, 90% of Hervé’s pieces are originals; only exceptionally few are produced in larger quantities. Those who are fortunate to possess one of Hervé’s works hold a piece of his inspiration and his passionate view of life.

As his parting words indicate, Hervé’s hands are “itching” to continue working, and he has truly enjoyed moving into the domain of larger more functional pieces such as furniture. His children are all embarking on their own creative careers in fashion, graphic design and fine arts. This is a delightful family surrounded by love and artistic passion. 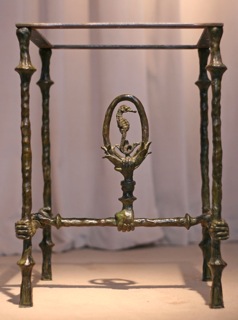