My interview with Sat, the lead vocalist of French rock band, Flying Pooh

We sank to our seats on the rain soaked streets and began the following exchange. 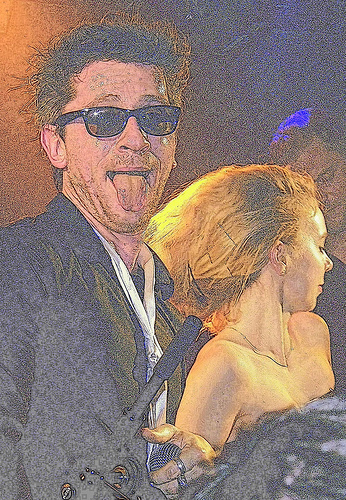 Paris Paul Prescott: So, Sat, how did Flying Pooh come together?

Sat: Well, not very original: We’re childhood friends who decided to create a rock band in 1992!

Paul: The band’s name is original, though. What’s up with ‘Flying Pooh’?

Sat: At this time we did play fusion music with different kinds of influences from metal to ska with a taste of funk, salted with polka!! All mixed up in an energetic cinematic rock style!! We fell on ‘Pooh’ in the dictionary and decided to make them fly!! The Flying Pooh was born.

Paul: I know membership in the Pooh is rather fluid… How many members do you have at the moment?

Sat: Now we’re a six member band, which is really bloody enough. Six mouths to feed, to hear, to mix, to get together… Wahoooo! Still, six assholes on stage… It rocks!

Paul: If Flying Pooh has stuck together for 20 years, does that mean you all are full-time professional rock stars?

Sat: No, we do have creative day jobs. Some are designers, some sell guitars… It’s a long way to the top if you wanna rock and roll, especially in France. 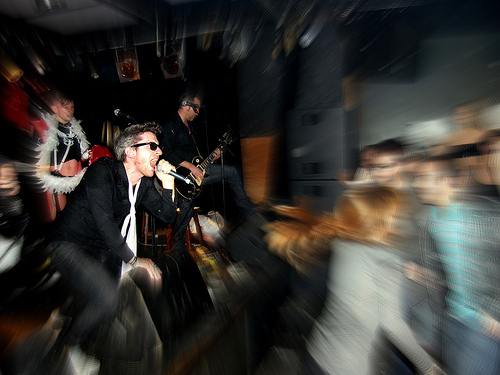 Paul: Do you consider yourself French rock?

Sat: No, we’re not a French rock band in a way ‘cause we don’t sing in French. And except for my accent, I don’t think people hear us as a French band.

Paul: Which could be a good thing, considering the condition of rock in France.

Sat: To rock in France is getting harder and harder. The music business is getting more difficult now. The subsidies are smaller and smaller. The CD is disappearing. But music’s still alive!

Paul: It is thanks to you guys! Do you write all the songs yourselves?

Sat: Yes, it’s our songs!! And we have four albums now: Flying Pooh EP, Viva San Antonio, Spanking Day, and Never Slow Down. No covers except one song from the Kinks, ‘You Really Got Me’. But we don’t play it anymore.

Paul: What about performing in Paris? I’ve been to some concerts here by other bands and the crowd was as excited as commuters on the Métro on Monday morning. Is it tough to perform in Paris?

Sat: Parisians are often boring. They are blasé. But it’s a good challenge to make them move!!! We’re from the suburbs, we have another kind of energy… No fear, no shame. No mainstream!!! 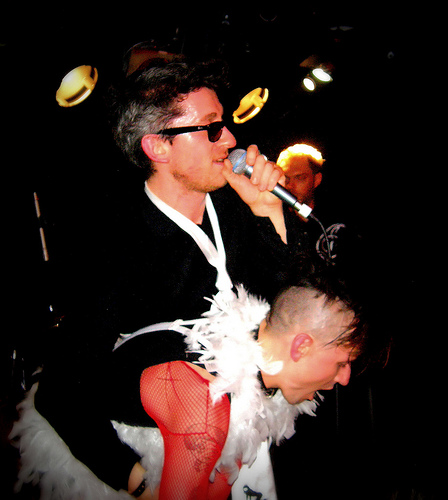 Paul: Flying Pooh really hits the crowd in the face, full force. What’s your secret to firing up Frenchies?

Sat: Do not think, act!! Rock it as if it was your last show on earth. I know our songs rock, we just have to play right and be sexy on stage and give everything!!!

Paul: Speaking of sexy, smoking Frenchies… you have some incredible groupies!

Sat [makes a noise that sounds like]: Yeahhhh, we do play with punk cheerleaders, The Tads Girls!!! An amazing crew!! Plus our fans are a big girl mix… Plug it and play!!!!! 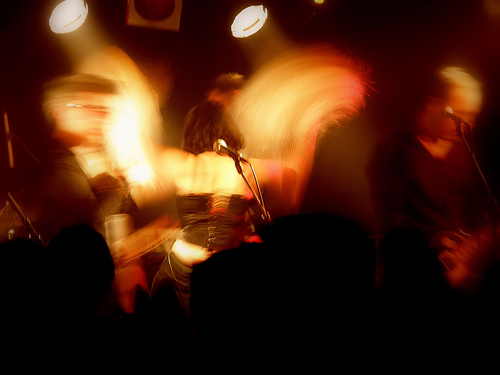 Paul: When you play, I hear a lot of mixing styles. There’s pop, rock, funk and punk… How would you define your style of music?

Sat: We are a rock band but a creative one, not a ‘classic’ one. We try to bring images through the music to make it more cinematographic. To get to this goal, we get sounds from everywhere: pop, funk, psycho-rock, surf music, and we mix it in the Pooh Machine! Our goal: Spank the ear!!! 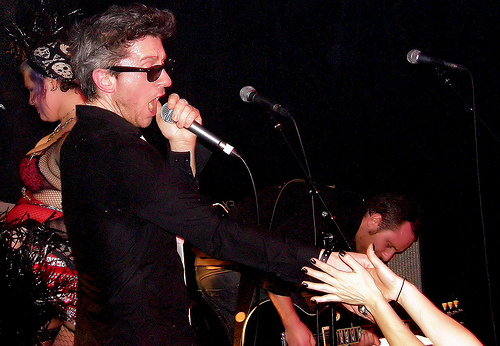 Disclaimer: While I have met Sat and attended a Flying Pooh concert, the interview was conducted entirely through email and not on a curb in Paris’s red light district. I changed some of my questions to help the interview flow, but all of the answers are as Sat wrote them. Enjoy!

The pictures here are taken by Paul. You can find more of them on his website. To know more about the Flying Pooh, you can visit their facebook page.