Is theft on the rise in Paris? be warned – be aware!

Guest Contributor and member Randy Diaz has had articles and interviews published on our site previously including our interview/s with Randy and also his interview with Ruth Yunker about her book ‘Me, myself and Paris’.

As you are no doubt aware MyFrenchlife.org is a community for french, francophone and francophiles and is so much more than a guide, however, this article of Randy’s is very practical and thorough and in my view, deserves to be re-posted here for My French Life members.

This article is intended as a warning and Randy says “don’t be paranoid, just be aware! Be on the offensive, not defensive.”

There’s been a lot of news lately about muggings on the metro.

Young gangs of 2 or 3 are roaming around the Paris metro or the RER looking for vulnerable passengers. And, there’s also theft happening around town, especially around the canals (e.g., Canal St. Martin) and parks. It appears that they are looking for purses in the hopes of finding cash, and if they’re lucky also jewelry.  Cameras are also sought after, but the biggest “cash cow” of all are smart-phones, The French calling it the “Iphone-effect”.

Since 2009, with the increase uses of smart-phones, especially the Iphones, there’s been a 40% rise in crime to date and 53% of violent crimes on the metro are tied to smart-phones. There is a huge market for smart-phones in the African countries. Apparently, stolen smart-phones can be sold at a premium, since there is such a shortage and demand is high.

In comparison to other major cities, especially when comparing Paris to major US cities, Paris pick-pockets are not violent, in other words, they won’t pull a gun on you as they would for example in the U.S.  They may knock you down and punch you for an Iphone, but they won’t kill you for one. They may also threaten you with a knife or brandish “poings américains,” the French name for brass knuckles. In those cases, give up your valuable(s), why take a chance that they may use their knife or brass knuckles on you. Is your smart-phone or valuables more important than your life?

Paris is a relatively safe city, primarily because private guns are still difficult to obtain. Near impossible.  However, Paris is ranked as one of the 10-major cities for pickpockets.

I’m not trying to scare you, but I want to give you some tips on being safe and aware; hence, enjoy your stay. All too often the tourist will become so enthralled with the beauty of the sights and scenes that they forget about personal safety and their belongings.

Although this attached newscast is in French, you’ll get the idea:

In general, always be aware of your surroundings. Here are a few tips: 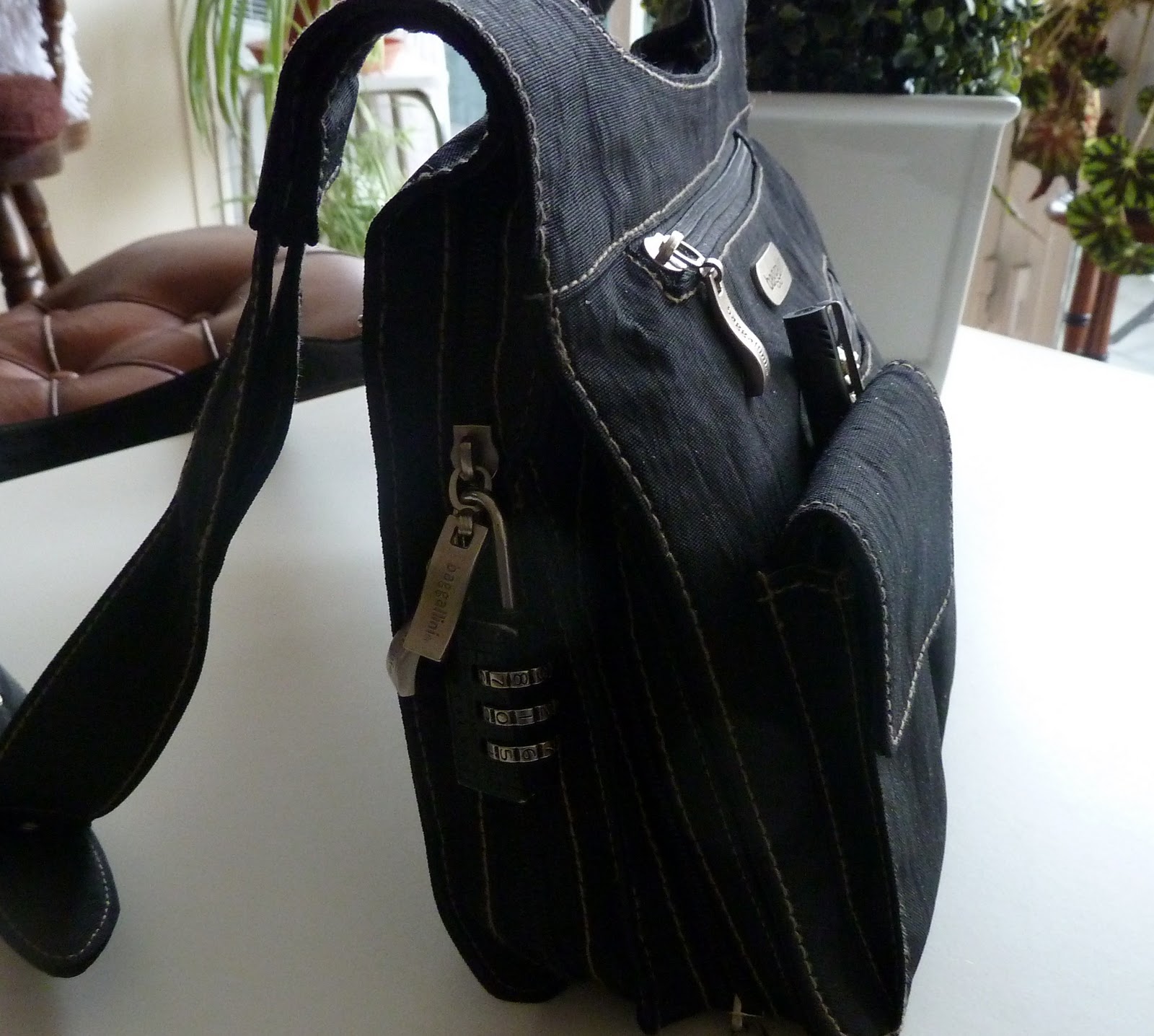 Notice the small combination lock on the zipper, it is also a deterrent

Around the metro or RER or public transportation: 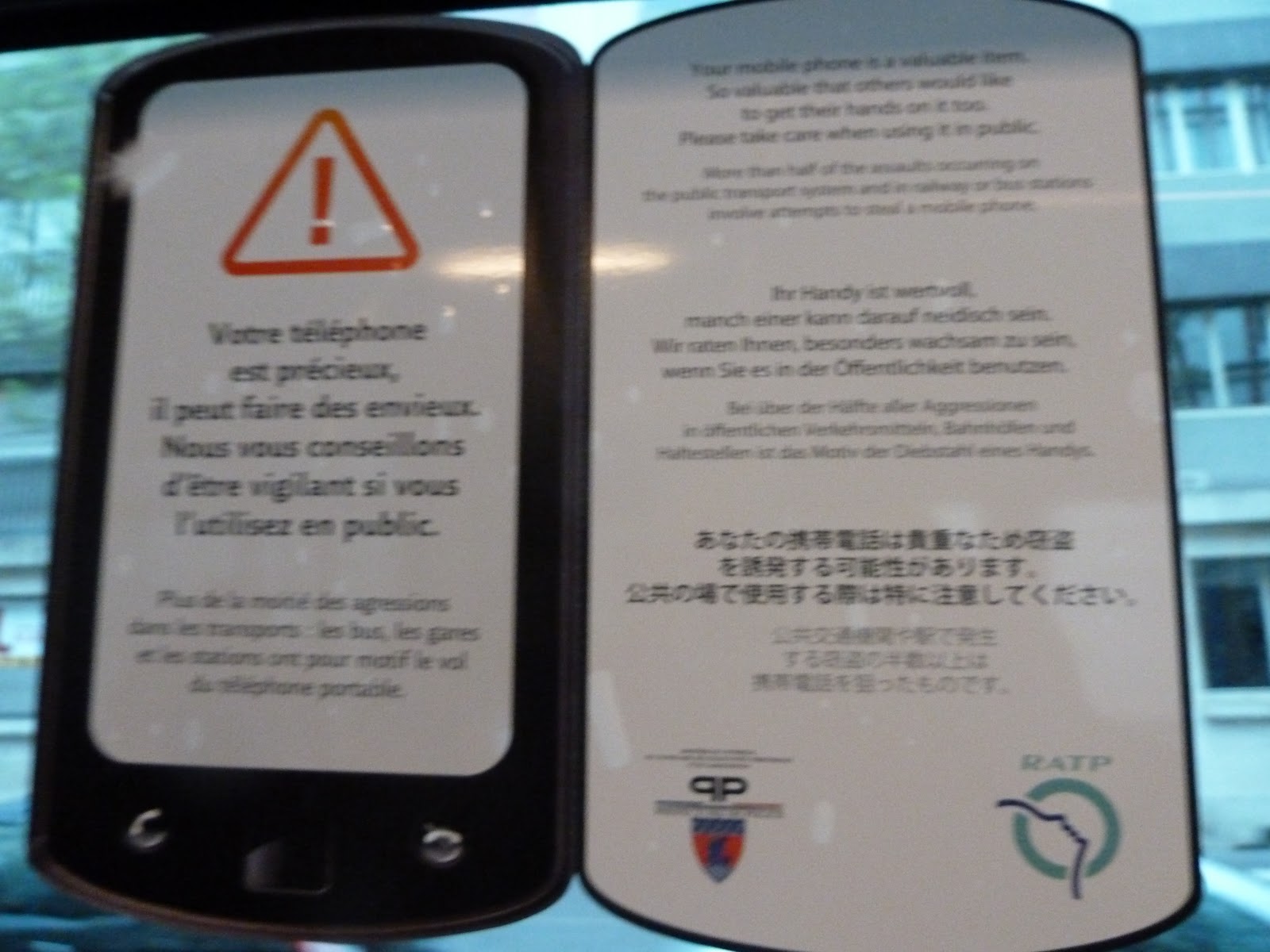 Taken on a bus, warning passengers not to use their smart-phones on the bus. NOTE: the warnings look like Iphones 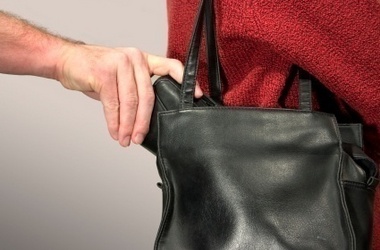 A purse not zipped shut

Often in crowded areas, e.g., Notre Dame, gypsies will come up to you and ask you if speak English. Always, say ‘NO’! The intent is that you read a message asking for money. Sometimes, when you’re so intent on reading the sob-sob narrative in English, they have an accomplice rummaging through your purse etc.
Touring:

NOTE: In all of the above cases, never, ever put anything down even for a second. It can be whisked away faster than you can say “faster.” 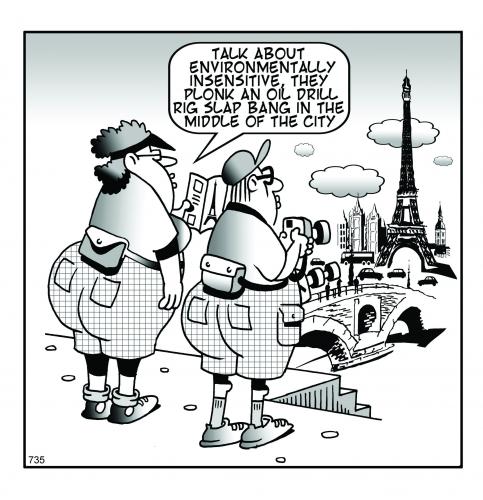 The French are trying to find ways to make your smart-phones inoperable once stolen. In doing so, will make stealing an Iphone less attractive.

Many of us with smart-phones carry a lot of information that we do not want thieves to get a hold of. There are apps .e.g, “find my Iphone app” for your smart-phones to not only track your stolen phone, but also to wipe it clean of all information. This article with a video tutorial explains it all. “Security for your cell phone”.

It goes without saying that when leaving your “vacation-rental” apartment, secure it. Regardless of how warm it is outside, close and lock all windows. It doesn’t hurt to close the shades. It doesn’t matter what floor you’re on, the topmost floors are also vulnerable since burglars can easily swing into an open window from the rooftop, and escape through the front door. Apartments on the ground floor and higher floors with balconies that can easily be scaled are particularly vulnerable. In fact, a friend’s neighbor in a 4th floor apartment was recently burglarized. Apparently the burlgar saw that the window was slightly ajar, he scaled the balconies undetected since most of the tenants were at work, and voila, jackpot. Secure your valuables in a safe, if available, or keep them well hidden.

It’s not difficult to spot a tourist in Paris. Try to blend in. Don’t call attention to yourself. Don’t be a “loud” American, most Parisians are soft-spoken. Don’t walk around holding an obvious map. Most Parisians, even Parisians born and raised in the city carry a “Paris Practique” street guide (book containing maps of streets in Paris) that can be purchased at Monoprix or a book store . Wear your purse or “murse” wrapped around your neck and worn to your side where your hand and arms are.  Although men wearing shorts was a clear sign, saying “I’m a tourist,” more and more French men wear shorts in the summer, but typically below the knee, sort of looks like “Capri” pants. 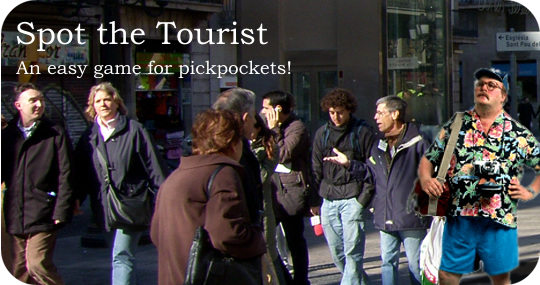 Don’t be surprised if no-one comes to your defense if you are being attacked. As a general rule, the French do not want to get involved to protect their own safety. Always, always call the police or have someone call for you. There are many surveillance cameras in the e.g., metro and the police will have a better opportunity to capture the criminal with information you provide.

And, if you still get pickpocket, here’s a  “check-list” of what you need to do.  And, always check if your e.g., purse etc. has been return to the “lost and found” called  “Centre des Objets Trouvés de la Préfecture de Police de Paris” (address in the “check-list”). A friend’s purse was stolen at CDG airport, and she recently retrieved her purse from the “Centre de objets”, albeit minus the cash.

With that said, don’t be paranoid, just be aware! Be on the offensive, not defensive.”