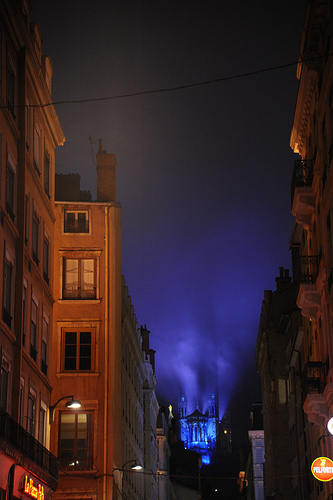 From a street, view of the Basilique of Fourvière illuminated

If one day you’re in Lyon on December 8, you could by nightfall have a nice surprise.

You would see, little by little, the edges of windows light up. You would see one by one, people light small candles and place them in small glasses (the “lumignons”) along their windows. This day they celebrate something, this day, for over a century, they have been giving thanks.

Legend has it that they would like to thank the Virgin for saving Lyon from the plague. Historically this isn’t entirely accurate.

The story begins at the end of the Renaissance, at the 17th century. With the plague then ravaging Europe, thousands of Lyon’s people died and half the population of Lyon was decimated.

After having initially placed their hopes in the Faculty of Medicine, on 12th March 1643 Prevost and Aldermen (mayor and deputy mayor at the time) turned in desperation to the Virgin Mary. Aldermen undertook to erect two statues of the Virgin, and vowed that they, and all their successors would go to all the festivals of the Nativity of Our Lady (September 8th, the day of the Nativity of the Virgin Mary). They would attend Mass and pray in the chapel of Fourvière (dedicated since Antiquity to the Virgin). They would offer 7 pounds (just over 3 kg) of white wax candles and torches, and a “gold crown in the sun” (name of the coinage at that time). For all this, she would offer her protection to the city of Lyon.

And, while the plague continued to rage in France, that year in Lyon it stopped. 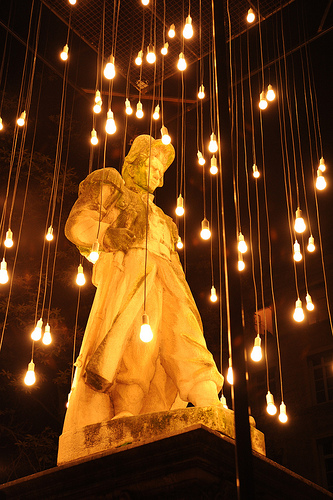 One of the place Sathonay’s installations.

The Aldermen kept their promise and every September 8, at the “Grand Mass” of the Nativity of Mary, a gold crown is given by the city to the bishop of Lyon.

But so what? No candles? No, not yet. But Lyon’s citizens felt now under the protection of the Virgin Mary and connected to her.

The Lyonnais developed the habit of praying to her in the chapel of Fourvière so that she would take care of them in their daily lives. The years passed and the pilgrims were many so the statue needed restoration. In 1852 after the restoration of the steeple, a statue of Mary in golden bronze was erected.

The date of September 8 was chosen. However, a few days before, the sky rumbled, the city was struck by a downpour and the Saône (one of the two rivers of Lyon) overflowed. A new date was selected: December 8, feast of Our Lady (Our Lady of Advent).

But again, that day, a terrible storm arrived, and threatened the Saône once again.

The chiefs still wanted to push back the date but, miraculously, in the afternoon the bad weather subsided. So by nightfall, Lyon’s people, gratefully, put candles and candleholders (“lumignons”) on their windows and left them burning until morning.

Thereby the Illuminations were born. 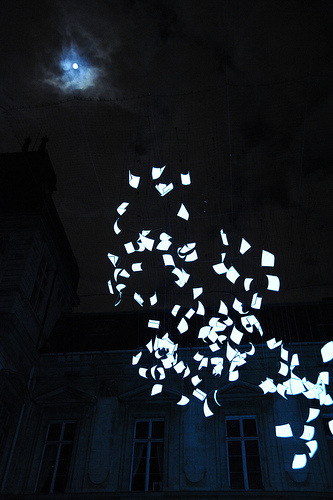 Installation in the yard of the Hôtel de ville.

Today it has become a secular event called the Festival of Light. It occurs on December 8 and all the people of Lyon place these little candles on the edges of their windows and illuminate the city.

And how big it has become! Sixteen years ago when I arrived in Lyon, you could go for a walk, drink mulled wine in the streets and watch the fireworks. Historic monuments were lit up in a special way for the occasion but it was nothing compared to what it has become!

These days the city is transformed. Artists, designers, lighting specialists and architects from around the world transform Lyon with light.

Streets, monuments, bridges, squares; each corner of the city is full of grandiose or poetic installations that one explores on a magical ride.

It has become so big that the festival now lasts four days to accommodate the three to four million visitors, both French and foreign.

But only the December 8, people from Lyon light their lumignons.

And I know that even when they’re away from home, in another city or another continent, they will not fail to do it.

So next year on this day, look out the window, and if you see a candle in a small glass shining on the edge of a window, you’ll know that behind it there’s a French person, that it comes from Lyon and you’ll know why.