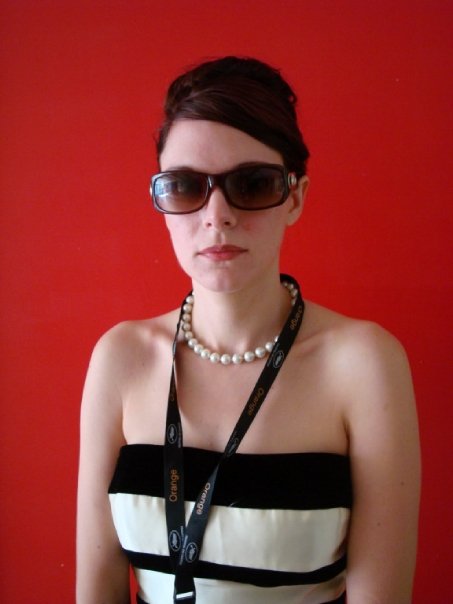 Leslie, how would you describe yourself in three adjectives?

I first came to France with my boyfriend, Jason, who was following in the footsteps of his favorite writers. But I’ve since fallen in love with all the tradition that exists here for artists as well. It’s easy to find inspiration when you’re surrounded by the world’s greatest museums and galleries.

How did you get started taking photographs? How did you decide you wanted to do it professionally?

I was drawing and painting from the time I could walk. My father is a painter and I always imagined that I would be some kind of artist. When I was in college, I went through a bout of ‘painter’s block’ and started using my photography class as an outlet for my creative energy. Then I found that I was enjoying it so much that I switched my major to photography and just stuck with it.

How would you describe your photography?

I think my photos are usually about the tension between the real world (as captured in the photograph) and my painter’s desire to turn that world into the one I see in my head. I’m always using the computer to bend the reality of the images to fit my whims. I guess I would say my photography tries to explore the questions I have about the difference between reality and perception. So I hope it’s a little destabilizing. 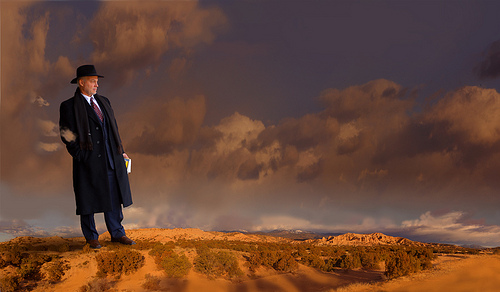 Your website says about you: “She is not sure whether or not she believes in objectivity.” How does this concept come out in your art?

I use a lot of altered reality in my images, so I’m always imposing my subjective vision on them before they’re presented. After a while, I started wondering if there even was a ‘real’ way that things ‘objectively’ look, or if all any of us have access to is our own perception. I try to make my photos look like they’re staged in the universe of my imagination, but if I’m consciously aware that I’m doing that, then I have to acknowledge that the people who view my work will be doing that too. So they might not ever see the same thing I see no matter what I show them. And I think that’s really interesting. So I try to make it clear that my work doesn’t pretend to be realistic or objective.

What do you strive for as a photographer?

When I’m working on a photo, I’m always trying to explore and navigate that weird space between what I see in the capture and what I remember or imagine. I guess I’m trying to learn about the process by which my mind changes things after I’ve perceived them. So if I’m striving for anything as a photographer, it might be to open up some discussion about that process and how our memories and imaginations affect our interpretation of things.

Where did you get the idea for a pin up calendar for chess players?

I play in chess tournaments myself, and I have always wondered why I didn’t see more women playing the game. I also worked for a while as a topless dancer and I noticed that my customers would always seem a little confused when I told them I was interested in things like chess, art or Greek history. The combination of these experiences led me to start wondering why there is such a gap in the way we portray physical vs intellectual beauty in women. I wanted to ask why people don’t automatically consider intelligence as sexy as nudity. I also marked important dates in women’s chess throughout the calendar. I wanted to remind people that women can, and regularly do, compete intellectually. 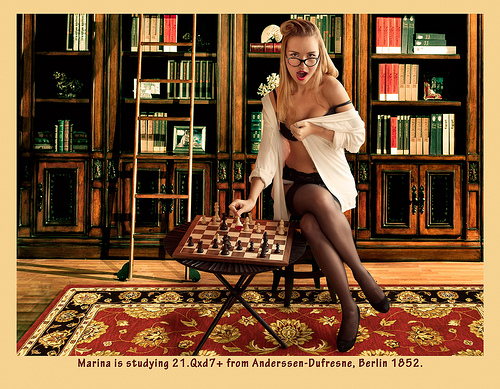 Miss September from The Pin-Up Chess Calendar by Leslie McAllister

A lot of your artwork is surreal. What inspires you?

I don’t really think of my stuff as surreal so much as just a little unreal. Or maybe para-real. Besides, I don’t think we’re even allowed to call anything surreal without Breton’s approval, are we? (wink!) Though I do count some of the surrealists among my influences. I recently did a set of drawings inspired by the collages of Max Ernst, for example. But as for photographic influences, one of my biggest lately has been Oscar Gustave Rejlander. He was a Swedish photographer who created montage photos by combining pieces of hundred of different images. He invented a lot of the stuff that I’m playing with now, but he did it in the 1850s so he didn’t have photo-editing software to lean on. He was pretty cool.

You have also worked in cinematography and illustration. Your film work has been screened at the Santa Fe Film Festival (2006) and in the Short Film Corner at Cannes (2009). Your artwork has been exhibited throughout Europe and North America, and you are currently working with renowned conceptual artist Markus Hansen.

Can you briefly describe what it is like to work with him?

Markus is great. He knows so much about art history that I feel like every day in the studio with him is a learning experience. But at the same time, he’s never pretentious or judgmental. He’s just cool and helpful and relaxed. I consider myself lucky to have been taken under his wing. Working with him has been a really positive experience for me.

Can you give us any clues as to what you are working on?

I’m working on a few things right now. Markus has created a series of large format chalk drawings that I’ve been working on, one of which was recently in a show at the Backslash Gallery here in Paris. Photo-wise, I’m doing a series of photo-collage portraits I call Tableaux Nouveaux, based on famous paintings. Still trying to settle the wrestling match between the painter and photographer in me. 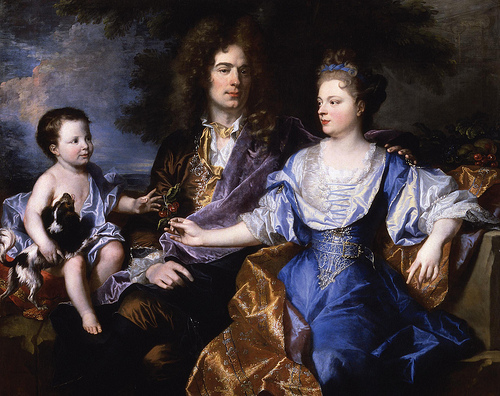 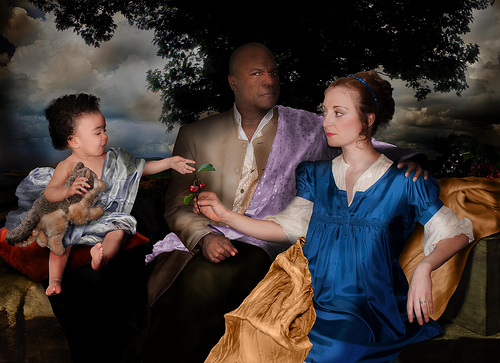 Portrait of the Johnson-Geslain Family by Leslie McAllister

You are based in Paris. How does the city influence your work?

It’s definitely harder to be lazy in Paris. Everywhere you look, there are some of the most important works in history. It really makes you think about what you’re doing and why. It kinda keeps you honest.

Where is your favourite place to eat in Paris?

I always love trying new things, but if I had to choose today I’d say this Ethiopian restaurant in the 5ème arrondissement called Godjo. Great food, really nice people and it’s right around the corner from me!

Where is your favourite place to drink in Paris?

I’ve been a few times recently to an Irish pub on the Canal St Martin called the Cork and Cavan. It has a wonderful view of the water and outdoor seats. And they’re really cool people. They let me throw a launch party there for my calendar project. And Jason likes to go there too because they show a lot of neat sports that you can’t find anywhere else.

Where is your favourite place to shop in Paris?

I’m not much of a shopper, but Markus recently took me to this amazing art store just outside of Paris called Marin and now I’m always looking for an excuse to go back there. It’s technically in Arcueil, but you can get there on the bus. 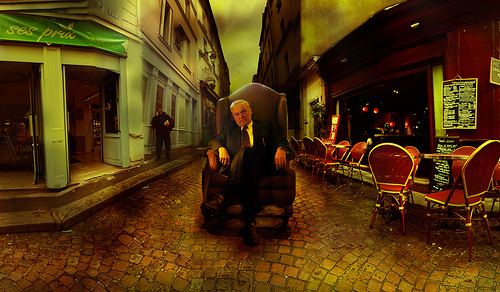 Where is your favourite entertainment place (a nightclub, a park, a museum etc.) in Paris?

Jason and I are training for a marathon right now, so we spend a lot of time running laps around the Jardin du Luxembourg. I also like hanging out in the Jardin des Plantes and along the Seine. I’m mostly an outdoor girl.

Where is your favourite place to take a day trip from Paris?

That’s an easy one! Château de Courances. It’s got one of the prettiest parks I’ve ever seen and water running everywhere. It’s a really relaxing and beautiful place to spend the day and it’s less than an hour from Paris. We go down there a lot because we know some of the folks that live there, but it’s also open to the public.

Where is your favourite place to shoot photos in Paris?

I usually shoot indoors, but lately I’ve been taking a lot of pictures of people along the Seine for a new project I’m working on called I’m au Quai, You’re au Quai.

You can find out more about Leslie on her website here.

Thank you Leslie for taking the time to speak to us at My French Life™. We’ve enjoyed getting to know more about you.