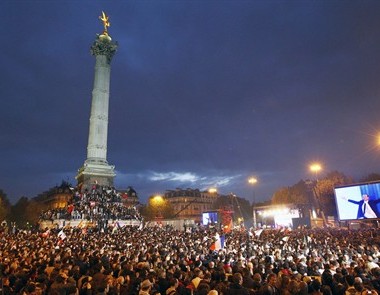 Supporters of Socialist President-elect Francois Hollande, seen on the video screen at right, celebrate after the results of the second round of the French Presidential elections were announced at Bastille square in Paris, France, Sunday, May 6, 2012. Hollande defeated outgoing President Nicolas Sarkozy on Sunday to become France’s next president, Sarkozy conceded defeat minutes after the polls closed. (AP Photo/Francois Mori)