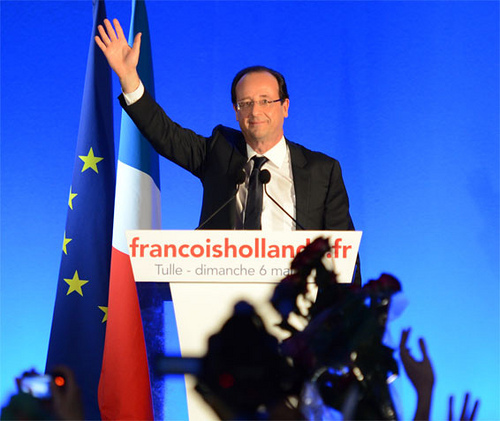 Once again about 80% of the French population went to the voting offices on Sunday 6 May 2012. This will no doubt be a date to remember, as it promises to open a new era for France. With 51,67 %* of the votes in favour of François Hollande, the French population has voiced its will for a change in the coming five years[1]. 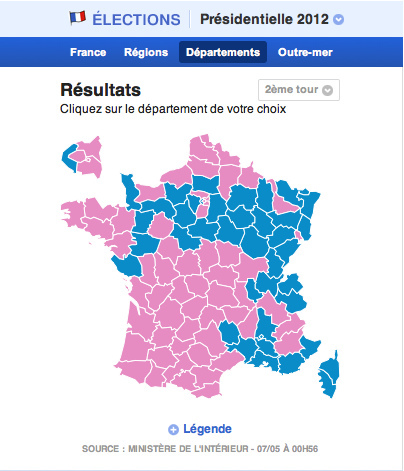 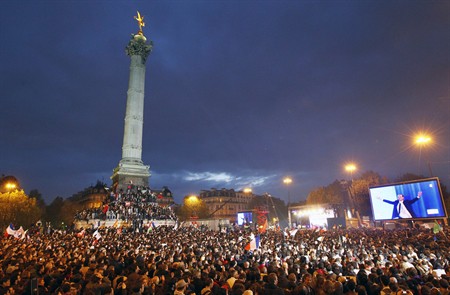 There was a flavour of 10th May 1981[2] in the air Sunday night in France when millions of French people, as well as the crowds gathered in Tulle[3] and on the Place de la Bastille in Paris, discovered the face of their new president.

In his first official speech, François Hollande acknowledged the level of hope that his election is raising and his sense of responsibility in front of the huge task ahead. And for sure, he will have a lot on his plate quite quickly with meetings already scheduled in Berlin for instance.

He insisted on his wish to reunite all the French people towards a shared destiny. His priorities and the two criteria he wants to be judged upon are justice and youth. He also aims to re-ignite the republican spirit of Liberté, Egalité, Fraternité and to restore the pride of being French.

François Hollande wants to give children a better life by investing in education and taking into account the environmental challenges. At the same time he aims for economic growth and intends to convince the European Union to follow him on this path. He also wants to get rid of public debt and improve the industrial capabilities of France. He said he trusts the French to get over the obstacles and difficulties ahead, like they often did in the past.

A night of celebrations in France 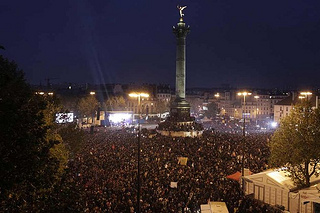 In Tulle the celebrations started with La vie en rose played by a local politician on an accordion. In Paris, the Place de la Bastille, like 31 years ago when François Mitterrand was elected, hosted a mega-concert. More than 50,000 people waited for François Hollande to join them after midnight. Dancing and singing in the streets went on till late in the night. All this of course broadcast live on TV and the web.

A new style of French presidency

He claims to be a ‘normal‘ President. One of his favourite quotes is “L’époque n’a pas besoin d’un sur-homme mais d’un homme sûr”. He is considered to be a calm person, with an acute political intelligence, a good economist, a leader who delegates, an anti-star, pragmatic and somehow secretive. “When François[4] says he loves the people he really means it”, said his current partner and political journalist, Valérie Trierweiler in a recent interview[5]. 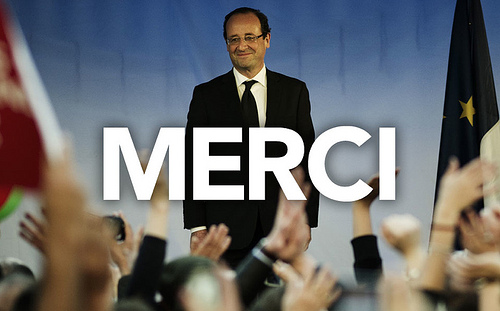 The defeated President made a short speech immediately after the announcement of the initial figures. The tone was patriotic as he thanked his supporters and confirmed once more that he will now start a new life as simple French citizen.

* figures at 1.30 am Monday morning, without the votes of about 1 million French living abroad.
This is the final article in the three-part series on the 2012 French presidential election by Marianne.

[1] Dailymotion.com
[2] In 1981, François Mitterand won the presidency with the campaign slogan « la Force Tranquille »
[3] François Holland is Mayor of Tulle in the région of Corrèze that gave another President to France: Jacques Chirac with an exceptional score of 82 % in 2002
[4] Biography Francois Hollande
[5] Interview: Dailymotion.com