Are you an expat or traveler looking for something different to do in Paris beyond the usual tourist destinations? Fortunately, Paris offers a lively music scene for all budgets and tastes.

Welcome to your monthly French music guide, ‘Paris Rocks’ for June 2012 – your backstage pass for the ‘must-see’ concerts in Paris. 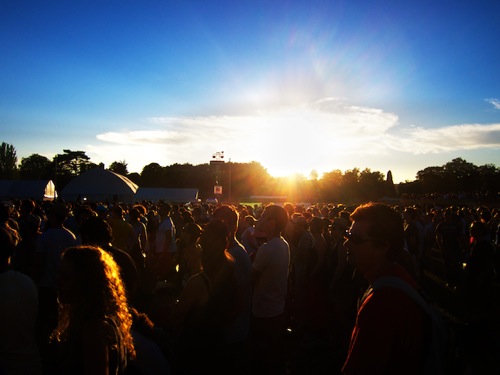 June is the best month for music in Paris. Not only is there an entire day dedicated to filling the streets with music of all sorts, but France joins the rest of the world in celebrating live shows with summer concerts. Of the wide mélange of live music choices to see this month, here are the top five I’m most excited to see.

San Franciscan, Palestinian and Filipino, Hanni El Khatib was once a creative director at a skateboard company before launching his heartbroken bad-boy music onto the indie scene. It’s a little bluesy, a little rockabilly, and a lot catchy. Hanni El Khatib’s music has been described as both “knife fight music” and good “for anyone who has ever been shot or hit by a train.” Slick your hair back, tuck a pack of Marlboros into your sleeve and go see what all the fuss is about when he plays with The Virgins on June 5.

This London quintet sounds a bit like a more effeminate Franz Ferdinand, which makes sense because FF singer Alex Kapranos produced their debut album. Their light and fun pop style throws in a bit of ‘80s twinkle to top off the sound, the combination of which makes for some supremely danceable tunes.

The biggest little electropop group on the indie scene today, you might know M83 from their music featured in everything from episodes of CSI: Miami and Gossip Girl to Victoria’s Secret commercials. Their music, a shimmering blend of the electronic and shoegaze genres, was made for the lonely communal experience of a live show.

The annual worldwide ‘music day’ originally began in France in 1982 when American musician Joel Coen suggested an ‘all-night music celebration in Paris at the moment of summer solstice.’ The event, the name of which is a play on the term faites de la musique, encourages musicians of every caliber and discipline to make music in the streets, anywhere, and fill the city with their songs. One can find a group of trumpet players here, a banjo band there, perhaps a stray piano player outside of Galeries Lafayette. Check the schedule here for more info.

The annual Paris Solidays Festival is a 3-day music fest in solidarity with the fight against AIDS. All proceeds go to the prevention of AIDS and care for the sick. This year’s lineup includes Garbage, Metronomy and Skip The Use… I’m excited to see Brigitte, the sultry-sweet French female duo seen in the video above.

Guns ‘N’ Roses will perform at Bercy on Tuesday 5 June
Because somebody still likes these goofballs, right?