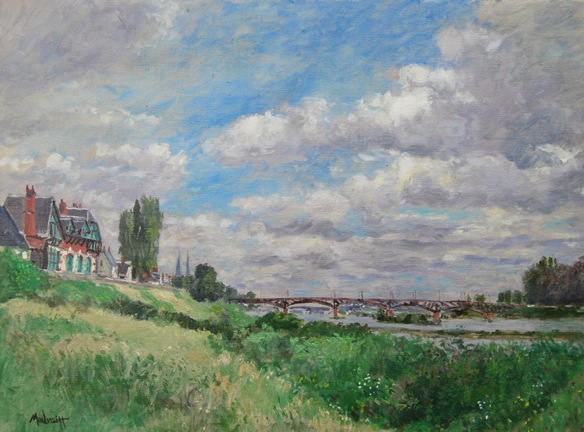 My love of Impressionist painting goes hand in hand with my love for France. So when I discovered that the first guest at my gîte in the Loire Valley was the well-known American Impressionist John Modesitt, I was thrilled.

I was even more delighted when I saw his latest paintings drying on the floor of the kitchen. And I loved and wanted them all! In the end, we chose ‘The Loire at Blois – Noon’ which is now in our living room in Paris. When we retire to Blois in 2014, it will grace the walls of the very house John was staying in when he painted it.

John has a special affinity for France and the Loire region in particular. He “did the Monet thing first” in Normandy, but in the end the busloads of tourists discouraged him. After this, he spent a few summers painting in Champagne and Burgundy, but found he had to do a lot of travelling to find subject matter.

Using ‘Map Quest’, he explored the Loire Valley and found Amboise where he could paint on the river banks and not see any cars. He loves the 30-mile stretch from Tours to Saint Dyé along the Loire with its overgrown banks. He keeps finding the “perfect place” and has a constant dream of living half the year in France and half the year in San Diego. 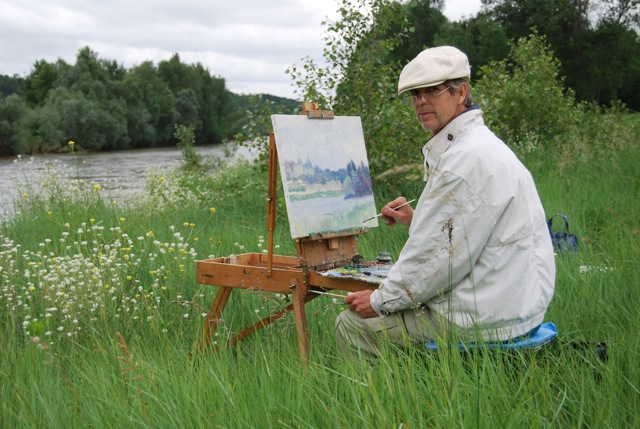 When I spoke to his very charming Japanese wife, Toshiko she told me he had been working with the colour green in France this year, so I asked John to explain a bit more. He finds that the greens in France have more red in them which makes it difficult to find exactly the right colour each time. It seems like he’s doing a good job anyway though! Our painting has a wide range of greens in it.

I also asked John why he had said that ‘The Loire at Blois – Noon’ was “special”. He replied it was his favourite in that group. There is “content, colour, a sense of place, with the house on the hill on the left and the metal bridge”. And he loves the clouds.

He told me about his last painting as well. He had to stand in an abandoned boat with his easel under the metal bridge. A lady was still able to find him despite the mosquitoes and nettles. She said it’s hard to find Impressionist painters nowadays and she doesn’t like modern art. I couldn’t agree with her more! 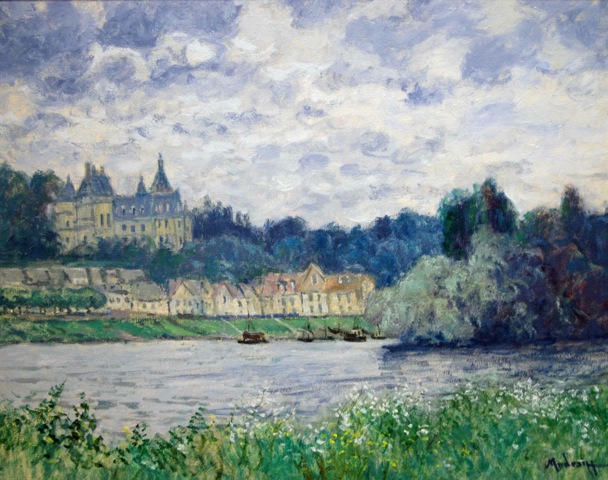 People sometimes ask John what is his best painting and he answers “the next one”. The material is always there – he just puts it on canvas and hopes that each painting will be better than the last one. Each has a different flavour because it’s “alive at that particular moment in time”. He very modestly says that if people like his paintings, it’s only because he has caught the place they love.

We then talked about frames because we obviously want to display our painting to its best advantage. So he took me round his studio in San Diego (Skype is a wonderful invention!).

John prefers European sizes and frames which are more intricate but the American public prefers the plainer style of frame. He explained too that if you have a lot of fine detail in a painting as we do, you need some sort of texturing on the frame. His paintings usually have gold-leaf frames so I think that will be our choice too! 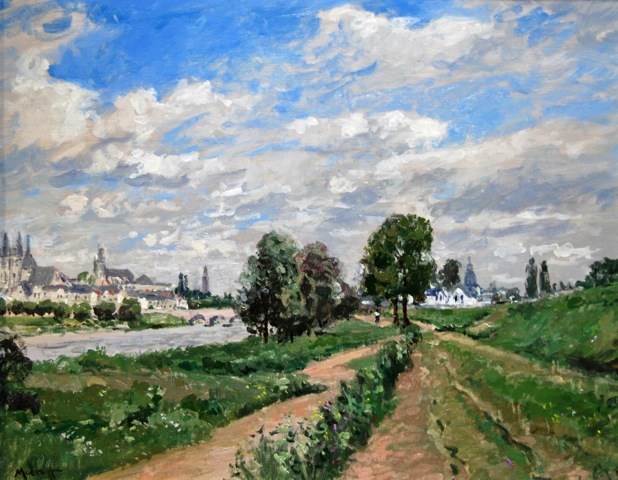