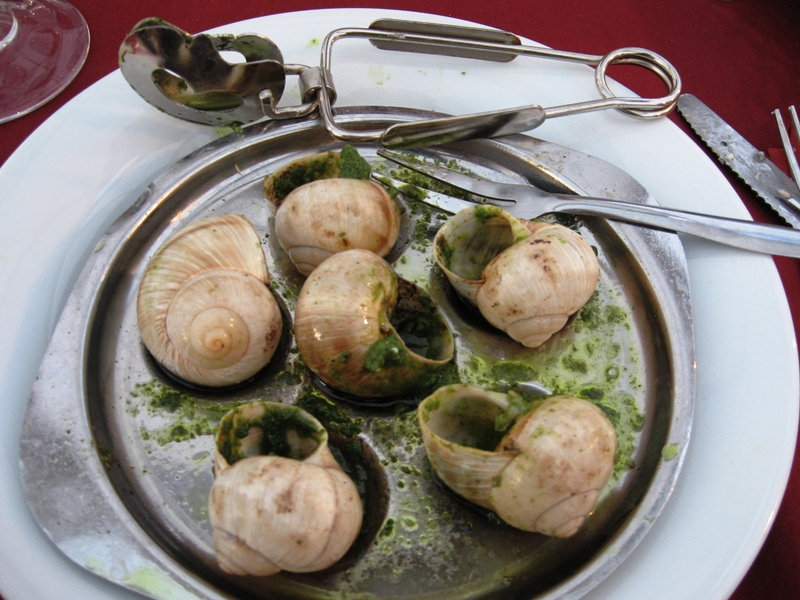 A big part of the holidays in France revolves around food. Let me share with you the food traditions my family observed when I was a child.

I come from a staunchly Catholic family and, for my parents, Christmas was first and foremost a religious holiday. We had no Christmas tree, only a Crèche, which my brother and I loved to put together. Gift-giving was a very small part of our Christmas celebration, and my parents, who did not think that children should believe in Le Père Noël (Santa Claus), told us that it was parents who bought gifts for their kids.

Going to midnight mass was a must. After it was over, even though we were dead tired, we would have our traditional buttered coquille de Noël with hot chocolate.

My family was never into having a ‘traditional’ réveillon, or late Christmas eve dinner. I think that this was due to the fact that my parents worked like dogs for weeks prior to Christmas day, and that Christmas eve was always a very busy day for them. They would have been too exhausted to prepare a big evening meal on that day.

On Christmas day, we had a ‘traditional’ Christmas dinner – which always included an appetizer of escargots and raw oysters, which I loved. It is only much later that my parents began to serve foie gras at Christmas.

We would also have turkey – French turkeys are not nearly as plump as American ones, and you find them only in stores around Christmas, not really at any other time of year (although you can find turkey breast cutlets in the meat departments of supermarkets all year around.) Remember that my parents owned a poultry shop, so they sold lots of turkeys around the holidays. My family never stuffed the turkey, and we never ever had the ‘traditional’ chestnut dressing. I was never a huge fan of turkey, so that particular Christmas dish left me rather cold, and I have no really vivid recollection of it.

I am not a sweet tooth, and dessert is rarely on my radar, so I don’t remember whether or not we had a traditional bûche de Noël, or Yule log.

However, out of nostalgia, on the first Christmas after I had moved permanently to the U.S., I made a Yule log entirely from scratch. It turned out very well, but it took me an entire day to make it. I have never attempted that feat again.

Another great tradition that my family had around the holidays was a big extended family dinner that always took place closer to New Year than to Christmas. My father, who was a chef, would prepare the entire meal and, most often, he would make his amazing pintadeaux forestière (a pintadeau is a ‘guinea fowl’). My father’s forestière sauce contained tomatoes, wild mushrooms, and bits of sautéed slab bacon. That dish, to me, still brings back memories of my happiest holiday-related times. After dinner, my cousins, my brother and I would put on skits for the entire family.

Finally, we always drank loads of champagne around Christmas and New Year, and many wonderful wines were served with all our dinners. I cannot even remember a year when I did not have champagne and wine around the holidays because I would have been too young to have any. If you were still a child, you just had less wine than the adults did.