Why Elizabeth and Stuart came to France

We’re at ‘The Shaker’ on l’Ile d’Or, the little island in the middle of the Loire River, with its stunning view of Amboise Castle, at the monthly meet-up of the Loire Connexion. Two newcomers arrive. We start chatting and I learn that Elizabeth and Stuart, both retired Americans, divide their time between their small apartment in Paris where they’ve been living for four years, and their bigger and more recently acquired house in Amboise.

I ask them why they chose to spend their retirement in France. Elizabeth explains that when she came to France for the first time at the age of 16, she was on the Boulevard Saint Michel and suddenly felt as though she had come home. “Some people have a very strong sense of place”, she says. That was when she conceived the idea of living in France, but it took a while for her to realize her dream.

Elizabeth became a researcher at the University of North Carolina in the field of instructional technology and crossed the Atlantic as often as she could. Two months after she started dating Stuart, an IBM engineer, she said, “Why don’t we go to France?”. Although he knew neither France nor French, he immediately answered, “Sure!”

Moving from a 360 square metre house in Chapel Hill, NC, to a 50 square metre apartment near the Eiffel Tower was quite an adjustment. But Elizabeth’s dream had come true at last. 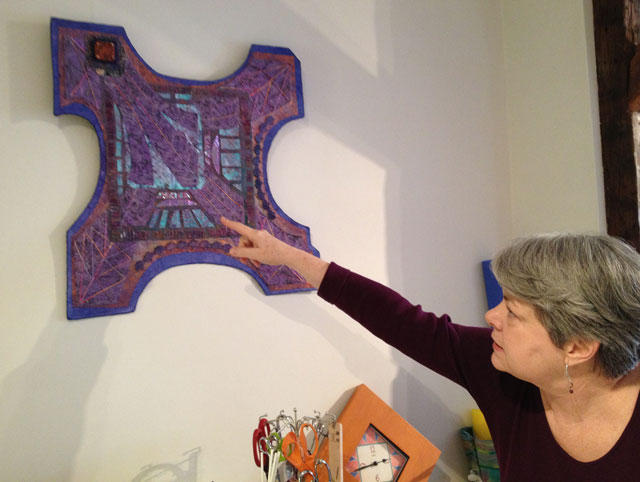 Although Stuart was very happy to live in France, he “didn’t speak French very well” when he first arrived, he tells me. However, four years along, he is able to “read novels and watch movies in French, and more importantly converse with French friends and neighbours”.  He finds that Amboisiens are much more accepting of his hesitant French than Parisians.

Both Elizabeth and Stuart have hobbies that require a little more room than their 50 sq.m. apartment in Paris could offer, which is why they looked for a house outside Paris.  After exploring several regions of France (Provence, Dordogne, Bourgogne, Normandy), they visited the Loire Valley, and fell in love with the beautiful, friendly region.  Amboise was an immediate “coup de coeur”.

“As a bonus”, adds Elizabeth, “Amboise is on a train line, which makes it easy to go to and from Paris”.

Elizabeth is a talented fabric artist, specialising in silk dyeing and printing, quilting and mixed media art. Stuart is a keen amateur photographer and accomplished woodworker. 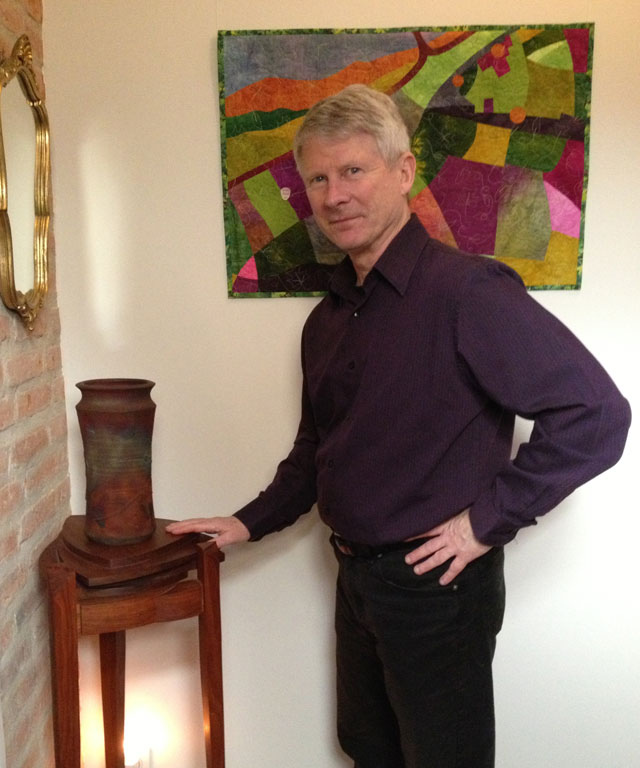 I’m invited to visit their cosy house in Amboise, where Elizabeth has a very professional-looking atelier, including a large cutting and pinning board and neatly organised shelves with fabrics, thread and other necessities. I’m particularly taken with one of her pieces, Tour Eiffel, which uses 25 different mixed media techniques and materials.

Elizabeth is able to share her passion with other artists in Paris at the monthly meetings of the Exploration Pour l’Art Textile (EPAT) association and would love to find a similar group in the Loire.

I have already seen some of Stuart’s photographs on his Amboise Daily Photo blog but now he shows me some beautiful calendars with some of his best photos taken in Paris and Amboise. I have a soft spot for his photos of the Loire, which I’m sure you can understand, particularly when you see his ‘Sunset on the Loire’. 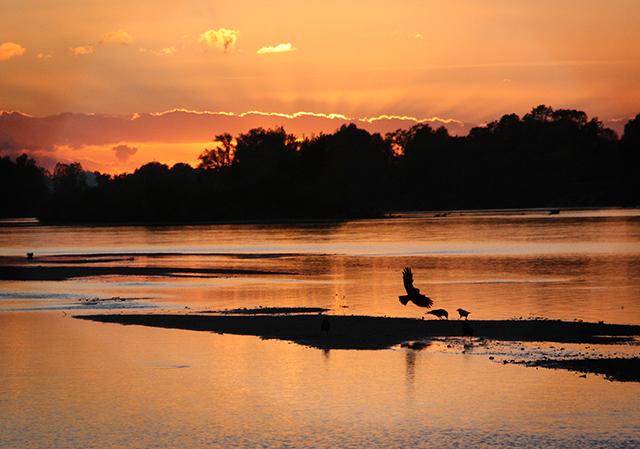 Stuart also shows me several pieces of furniture he has made as well as some very clever renovations of the house.

I come away thinking how amazing it is to combine so many wonderful hopes and dreams.