Churches of the French tropics: a story of charm and history 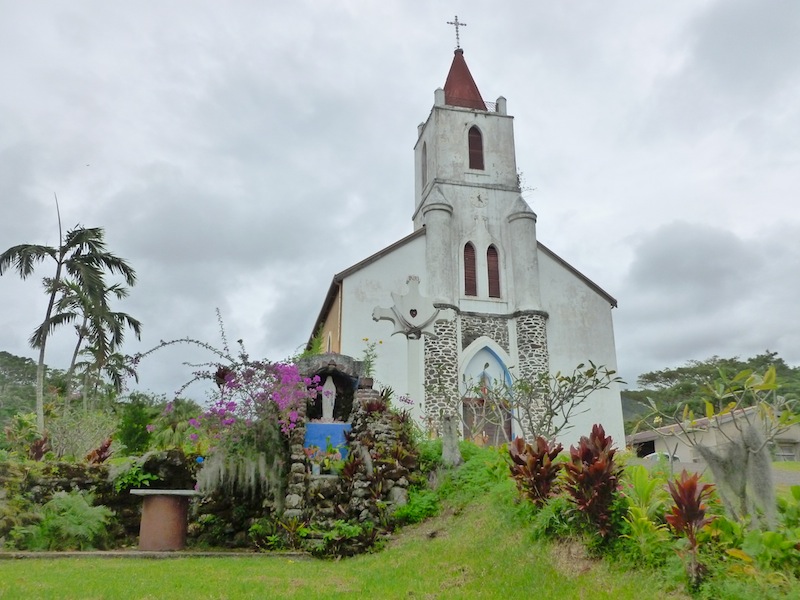 I enjoy visiting the north-east coast of New Caledonia. It offers glorious beaches, rainforests and waterfalls. The Kanak communities are welcoming and très mignons, and I love les charmantes églises dotting the coastline. Who would guess this little paradise holds the story of early missionaries in this French tropical territory?

When it comes to historic buildings, the French territory of New Caledonia is in short supply. Unlike Europe, where magnificent buildings boast tales of crusades, political and religious upheaval, and subterfuge, my adopted home in the Pacific has just a smattering of French colonial buildings to offer the historical enthusiast.

In part, this is because New Caledonia was founded relatively recently; barely 160 years ago. However, the savage weather is also a factor, as the territory boasts punishing tropical cyclones, storms and pervasive humidity. 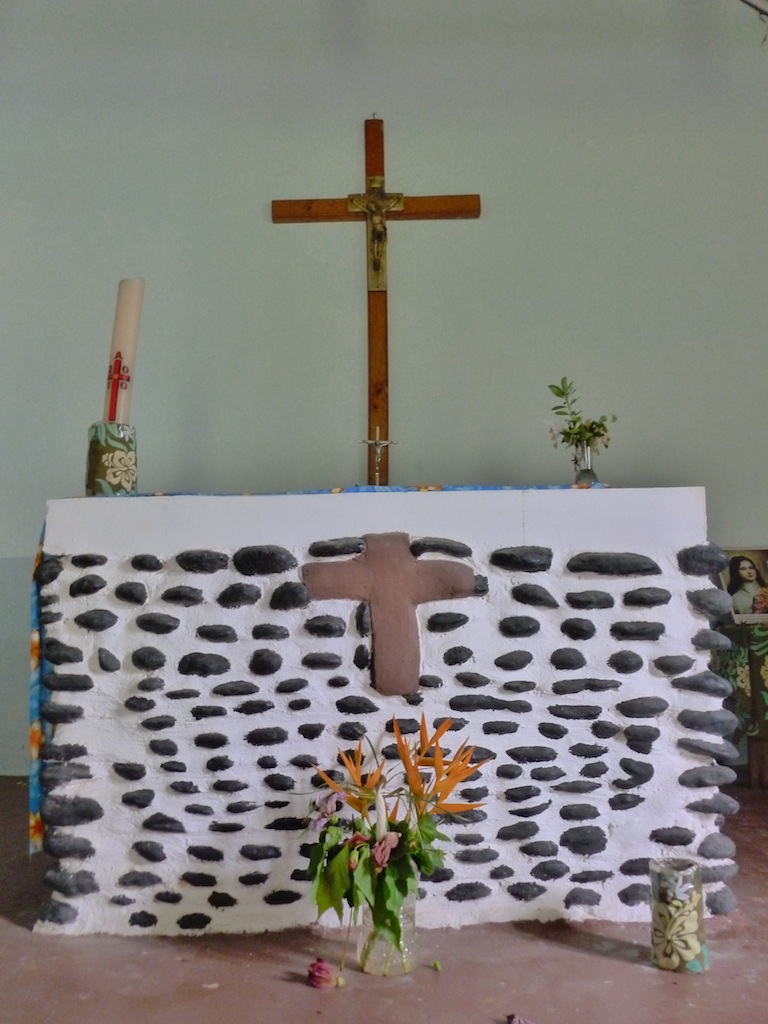 The remaining buildings are testament to their own importance and the skill of those who worked on their construction. No building portrays this better than the churches built in the 19th century by French missionaries. They are integral to many communities, particularly in the remote and stunning côte nord-est of New Caledonia.

These sweet churches, nestled in idyllic locations, mostly reflect the predominant Roman Catholicism in this area. The diversity in their styles, while modest, is beguiling.

Shabby paintwork gives an ancient, abandoned, and almost medieval appearance. Other churches reflect the bright colours which are impossible to escape in these French tropics – the gaudy blue of the sea, or the orange, pinks and reds of the tropical plants along every roadside.

Some churches sit back into the rainforested hillside a little, often paired with a parish school or a small cemetery. Others are close to the beach, with a backdrop of coconut palms and the reef of the Coral Sea. 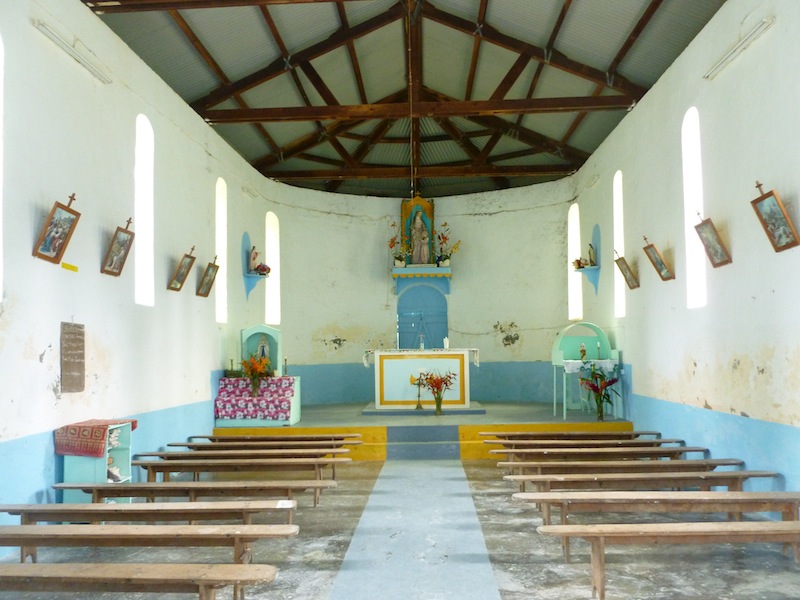 Inside, tropical flowers adorn every icon. The local floral theme continues in the printed cloth which adorns most alters. In all, interiors are humble, with wooden benches for the congregation, statues – which have been repainted many times over the years – simple tin roofs and coloured glass windows.

But these little churches, unassuming as they are, are part of an intriguing and sometimes brutal story of French missionaries in the Pacific. In the far north-east, before the barely sealed track takes a left turn into the soaring ranges of the northern Grande Terre, there are two churches. Both contain evidence of a violent beginning for Catholicism in this region. 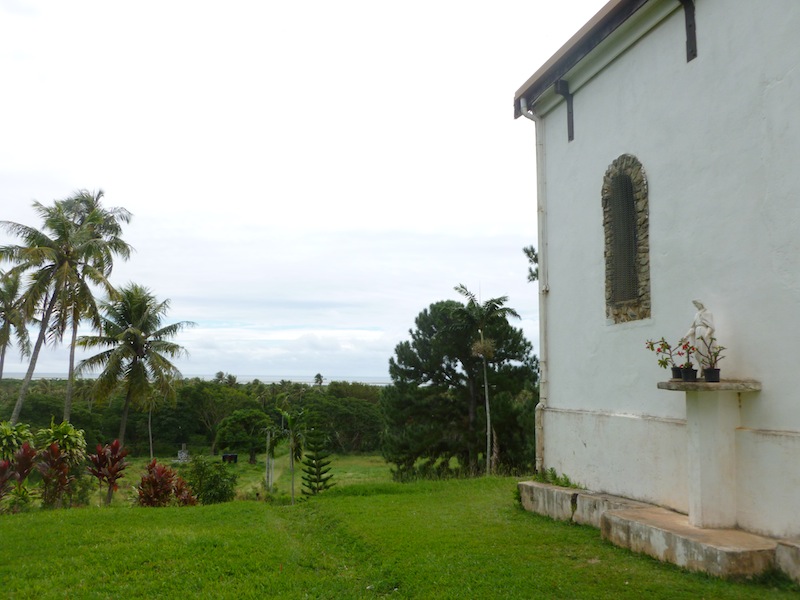 One is the cathedral in the northern community of Pouébo. This large church holds office on a high hill overlooking the road and the Coral Sea beyond. Inside is the marble mausoleum of French Bishop Douarre, responsible for the first Catholic mission in New Caledonia in 1843.

A violent beginning and an enduring French territorial legacy 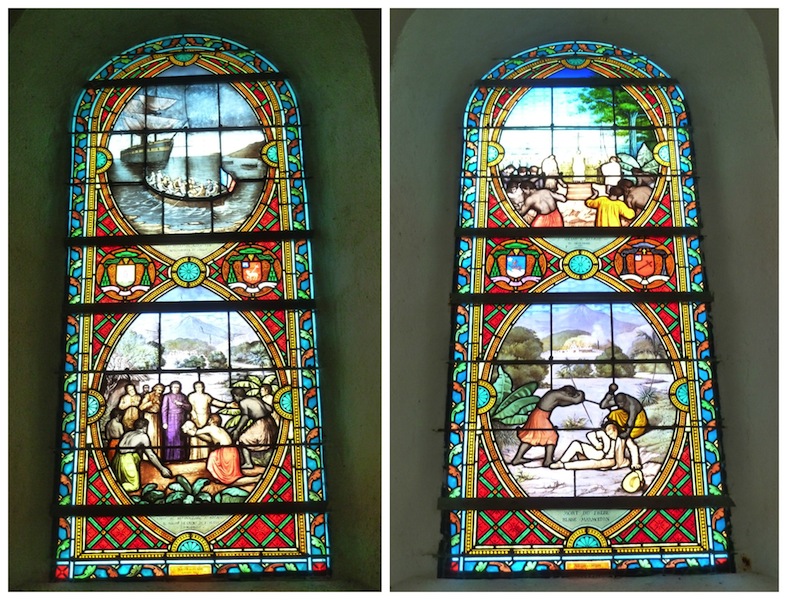 But my favourite church is the furthest away, before the road leaves the coast, at Mahamate. This jolie église marks the place where the first Catholic mass in New Caledonia was celebrated on Christmas Day, 1843.

This isolated church has two unique glass windows. They depict the arrival of French missionaries, the first mass, the slaying of Frère Blaise Marmoiton some years later by local tribesmen, and the subsequent return of his skull to the missionaries. In front of the church at Balade is an icon of Mary marking the spot of this brutal murder.

To see these churches is to glimpse snatches of history; to begin to understand the local Kanak communities and the role these churches have. Europe may have les grands monuments, but Nouvelle Caledonie presents French history – amidst tropical beauty!

Where have you found charming and historic French churches?