Happiness off the beaten track in Paris 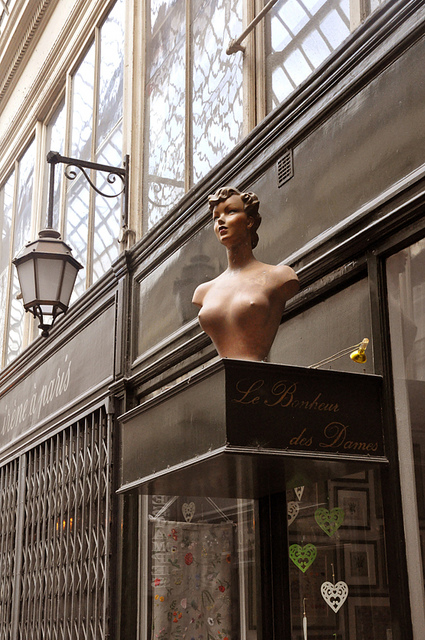 Needlework shops tend also to be tucked away in quiet corners – either stumbled across or shared knowingly and somewhat secretively with fellow needleworkers.

So it comes as no surprise that I first came across Le Bonheur des Dames (The Happiness of Women, named after Émile Zola’s novel and a rock group of the 1960s) by accident in the slightly off the beaten track Passage Verdeau in Paris.

Over the years I visited their tiny shop there a number of times. On a recent trip to Paris, however, I decided an excursion to their flagship store was in order. Found in the equally off the beaten track location of Avenue Daumesmil in the 12ieme, it’s about seven minutes walk from the Place de la Bastille.

Le Bonheur des Dames was founded by designer Cécile Vessière in 1979 when cross-stitch was barely known in France. Originally trained in fashion, Cecile applies the same approach to her needlework designs. In an interview with the French magazine, ‘Plaisir de Broder – Point de Croix’, in September 2009, she shared her design process:

“This is how I work. I always start with post-it notes of ideas. Afterwards, I put them together and organize them. I really love it that my creations present several ideas in the same embroidery.”

Despite being in business for over 30 years, Cécile is still inspired to create. As she said in an interview with ANA airline’s in-flight magazine  in September, 2010, her goal is to continue to create and innovate in needlework into the future. 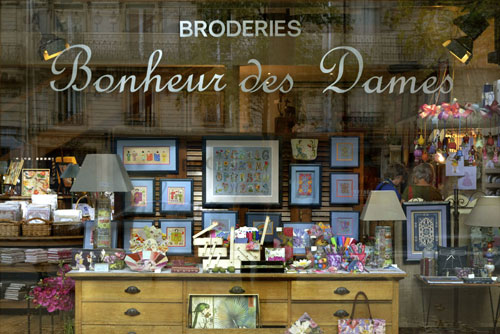 On arrival in the store, I’m delighted to find that it is befitting of Cécile’s vision, and of the title “flagship store” – it is massive compared to the tiny Passage Verdeau shop. I linger outside the shop, drinking in the display in the front windows, and yes, indulging in a bit of lèche-vitrine.

Finally, I enter the world of the French needle-worker. Two or three fellow shoppers are already browsing, including a young girl and her grand-mère.  The young girl is collecting her chosen treasures in a small basket – the next generation of needlewomen at work! 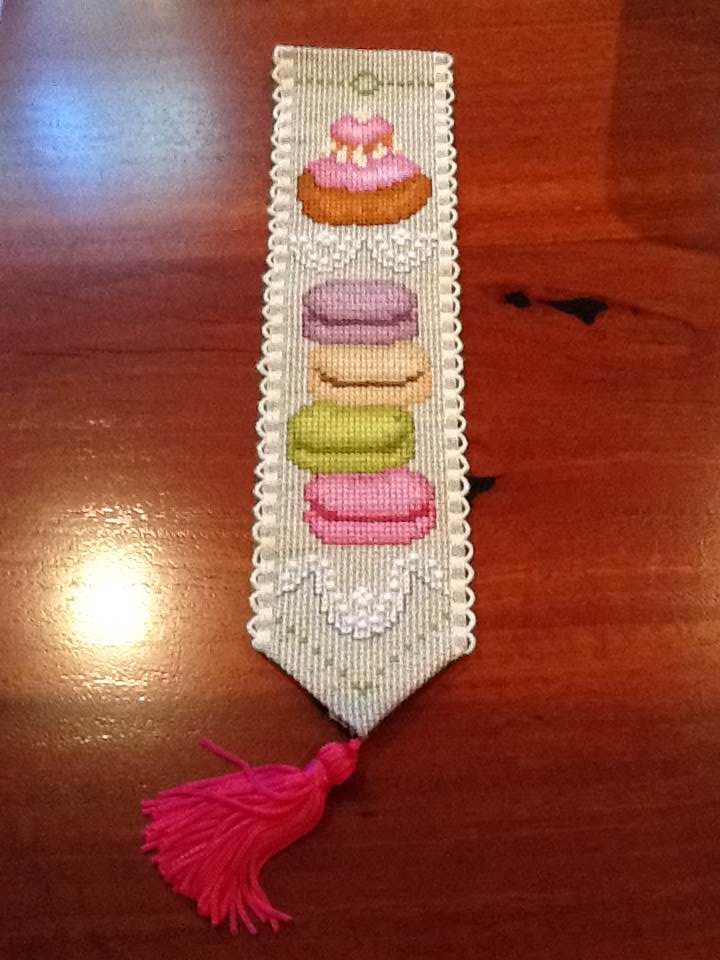 My eyes light around the walls – l love looking at the completed pieces – each one more tempting than the last. I spot the seasonal table – Christmas goodies laid out on a separate table. Then my eyes wander, and I can only just resist the baskets of other treasures: gorgeous samplers and pictures.

Next I head to the accessories table, where I am greeted by a myriad of vraiment français accessories: work bags, scissors, tape measures. A gorgeous linen needle case captures my heart, and my decision is made. It’s mine!

The kits at Le Bonheur des Dames are truly French, and so different to other needlework kits normally available. Readers used to American style cross-stitch will be particularly delighted in their difference. They make wonderful gifts and even better souvenirs to make and keep.

Le Bonheur des Dames could just be my very favorite shop in Paris.  Bonheur for this lady indeed.

What is your favourite hidden shop in Paris? Join the conversation in the comments box below.