Meet the French in Paris: a sporty experience 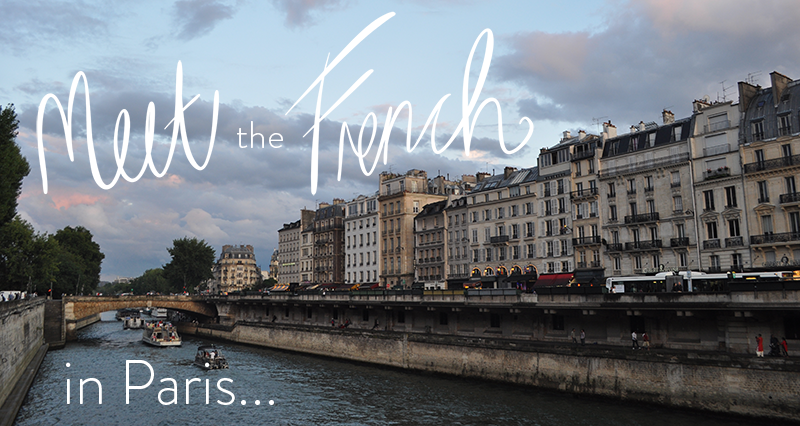 At MyFrenchLife™, we’re all avidly hoping to find that golden key to the ‘true’ French experience. C’est-à-dire; really exploring France as a local – not fleetingingly, as a tourist passing by.

There’s no better way of doing so than being taken under someone’s wing and seeing the city and life through their eyes. However, many of us have rather glumly agreed that making this connection is often a little trickier than anticipated, and this is why I’ve decided to make meeting these supposedly allusive gens français my personal project. Hopefully I’ll prove the many stereotypes wrong – and make some connections or friends in the process.

First on my list (put there purposefully, predicting that I would feel much more energetic and determined about the challenge in the beginning) was exercise. I took up gym classes, tried aqua-biking and yoga (not simultaneously!) all in the hope of meeting the French.

The question is, did all this time sweating it out in a gym class – which, in all honesty, felt more like boot camp – have any other advantages than just burning off the calories from one too many croissants?

1. Gym classes – a rather fatiguant experience

I used to think that Paris lacked exercise options. This is simply not true. The city is full of gyms (they’re known as salles de sport in France), and a quick Google search showed that there was one just around the corner from mon nouvel appart – so no excuses!

I enrolled and starting attending classes at least three times a week. I have to admit that they were tougher than I expected. One particularly memorable moment saw me lying on an exercise mat unable to move as the instructor yelled at me to get up and « pensez à la plage, pensez à ton maillot de bain! » 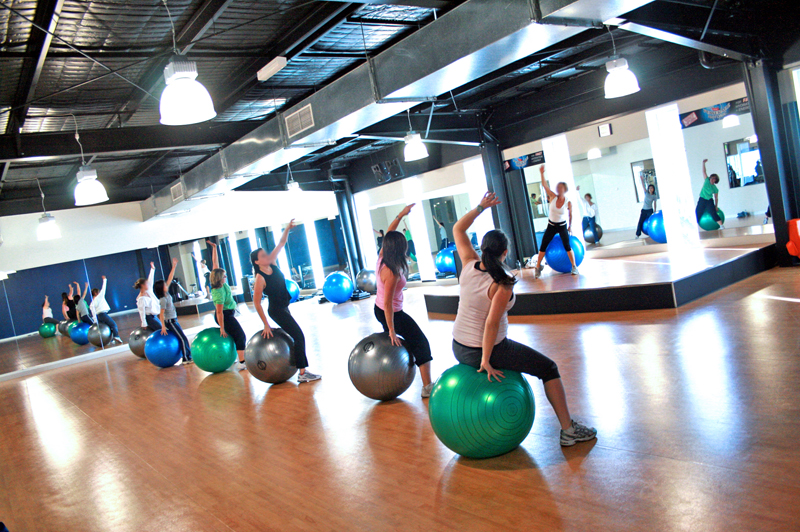 I’ve been attending classes for a while now, and although I couldn’t honestly say that I’ve made many firm friends, I don’t regret all the money (and effort) the experience has cost me. I feel like much more a part of a community than a fleeting visitor sub-letting a flat, and it pleases me a lot that I can start the day with heading to a class, where people recognise me and greet me by name.

My advice would be to attend classes regularly and to try and follow roughly the same schedule. In doing so, I usually see the same people who have their own favourite classes, and I’ve found that it just takes a little bit of effort to start conversations, usually about the class itself – how difficult it was (usually very) and what other classes they take part in.

For more on Parisian gyms, visit the Mairie de Paris website, or search for the best gyms on offer here.

Next on my agenda was my attempt at aqua-biking, a trend that has (rather unsurprisingly) thrived in Paris amongst the slim Parisiennes. Although a full membership was a little too hefty for my budget, I benefited from an introductory package on offer – and you should keep in mind that most of these slightly fancier clubs will offer something similar in an attempt to lure in the clientele. 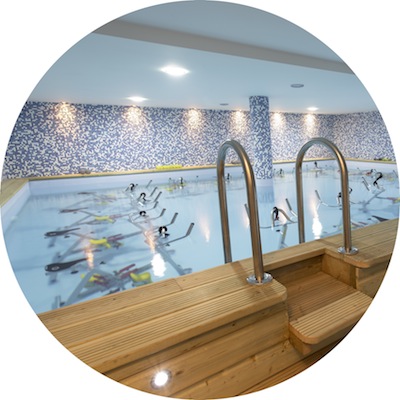 Despite the considerable fee, which left me wincing somewhat, there is an advantage to it that can definitely work in your favour. When people decide to invest in a club such as this, they usually want to get their money’s worth – which means attending regularly.

I’ve also observed that because of the many options on offer, people tend to pick something close to home, or in their local arrondissement for the sake of getting there easily. Again, this could be the trump card you’re looking for – you’ll see the same people regularly and have a better chance of getting properly acquainted.

My last tip regarding this particular attempt would be to invest something else: a little time. Stay around after and make the most of the sauna. Our French correspondent (and the woman who was good enough to introduce me to the wonders of aqua-biking), Jacqueline, has been attending classes with impressive regularity, and explained to me that: “the best way to get chatting is to invest some time after and make use of the sauna. That’s where people really get chatting and get to know each other.”

For those who are not so into aqua-biking yet have a calling for some sort of exercise, there is always Yoga. The next part of my experiment was to take up Bikram yoga.

Il faut avouer that I found it a tad difficult – and also somewhat liberating how within an hour, you go from a little bashful about removing too many clothes to stripping nearly everything off after 40 minutes at 40 degree heat. In terms of friends, this option has the same advantages as aqua-biking: a hefty fee equals regular members. 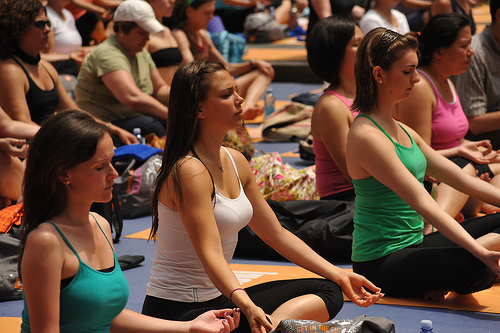 I again made the most of an introductory package, which allowed me ten consecutive days access to the facilities, with a mat included, for 39 euros. Regular attendance paid off – I started chatting to a lovely girl called Naomi who took my number to discuss other yoga options within the city.

Yoga being hugely popular in Paris, there are options for people of all ages and abilities. Yoga in the Marais offer options in French and in English (pick the French!) and there’s even an option for the elderly.

Paris has taken up running with zeal. There are numerous clubs on offer, and many different available days to give it a go – so again, no excuses! There’s even a French website dedicated to finding fellow joggers in your area.

If you’d like to join a regular group, Lolë Running Tours, organised by a Canadian active wear company, holds monthly Sunday running tours that usually last about an hour. The advantage to this one is that they usually end in the Marais for healthy drinks and snacks – and plenty of time to bond with your fellow runners… 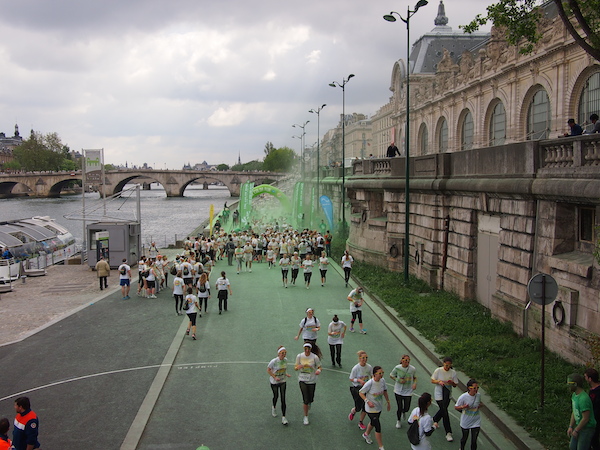 If you’re into organised races, there’s the Semi Marathon de Paris every March, and this is just one among many. If you manage to make a friend, training together for a marathon would be a great way to spend time together.

Though I didn’t get to try these out, they come highly recommended and are certainly next on my list when I’m back in Paris!

5. Become part of a team or club

Perhaps gyms, yoga, aqua-biking and running aren’t your thing. Pas de soucis, the good news is no matter the sport, if you already have an interest in something, half the battle has already been won! Just do a quick Google search for your sport in your area, and find out about joining up. It’s that simple.

A good friend of mine is a fantastic ballet dancer, and she made it her priority to keep this up when living in Paris. When I asked her about her experiences, she told me:

“Although everyone was kind, I did have to make an effort to have a proper conversation with the other dancers. They didn’t really open themselves up to longer conversations unless I instigated them. I was really glad I did though as they soon started inviting me to social events with them which really helped me improve my French and make more French friends.”

Alors, is it all worth it to meet the French?

Whatever the circumstances, some find it trying to keep pushing themselves to do exercise or a sport. My advice is don’t give up – aside from the obvious added benefits for your health, appearance and state of mind, it really is such a great way to become part of a community, put yourself out there and meet the French.

Have you joined any sport-related clubs in Paris? What were your experiences? Share your thoughts with us below!