Paris is abundant with hotels that were the former homes or favourite places of famous literary icons.

Francoise Sagan’s haunt was Hotel Lutetia, while Oscar Wilde inhabited l’Hotel where he uttered those famous last words: “Either this wallpaper goes, or I do”. But what about those hotels dedicated to literature, and to the art of writing itself? What of the places that give guests the feeling that they are spending a night in their favourite novel?

Literary hotels are a relatively new phenomenon, but are becoming more and more popular across the globe as a quirky alternative to traditional hotels. Visitors can sleep in rooms dedicated to famous writers and poets and often have access to a large selection of books. There are also opportunities to see objects that once belonged to favourite literary geniuses.

Paris boasts some of the most beautiful of these literary hotels and I have picked my top three to share with you.

Le Pavillon des Lettres is situated in the 8th arrondissement of Paris, just a stone’s throw from the most fashionable street in Paris, Rue du Faubourg Saint Honoré. As one of the boutique literary hotels, it rubs shoulders with the likes of Hermes, Chanel, and the Elysée Palace. 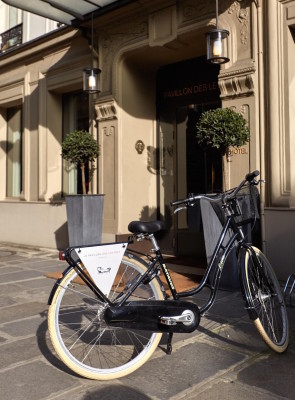 Le Pavillon des Lettres has only 26 rooms: each one dedicated to a letter of the alphabet and a writer, from Hans Christian Andersen to Emilie Zola. The room evokes the spirit of the particular writer or poet and a line from a piece of their work is hand stencilled above each bed. Artistically decorated and elegantly French, the rooms are equipped with air conditioning, Wi-Fi and an Ipad dock in each room. Ipads are available for use upon request.

The breakfast room is also home to the hotel’s library, where guests are invited to read everything from novels to comic books. The bookcases are filled with the great classics and contemporary literature alike, both French and international. 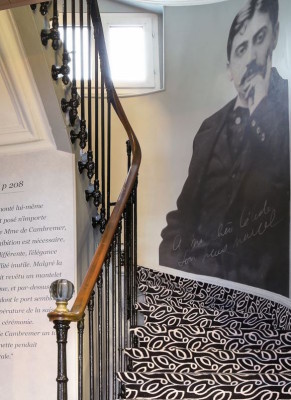 Le Swann hotel is situated in the heart of the historically Proustian quarter in the 8th. It is dedicated to Marcel Proust and features a collection of his original works. The 81 rooms are named after characters in Proust’s ‘Remembrance of Things Past’ or famous artists Proust admired, such as the painter Giotto or the author Anna Noailles, to whom he once wrote :
“Madame, how I admire you, how I love you, and how harsh your constant separation from you is to me. To have lived in the same age as you, in the same city, and never to see you!”

Each room contains an introductory text to the character or person and a passage from ‘Remembrance of Things Past’. The floors of the hotel are named after fictional places in the novel, for example, ‘l’étage Combray’ or ‘l’étage Faubourg Saint Germain’. Guests have access to a library of 500 books written by or about Proust, as well as 100 of his oeuvres translated into English. “Faire aimer Marcel Proust, le faire lire et découvrir…une passion à partager, jubilatoire pour moi”, Jacques Letertre, owner of the hotel, said in a previous interview.

Special honour is given to certain art forms that Proust enjoyed, such as book binding and haute couture. Le Swann exhibits some of the unique creations of Jacques Doucet, a famous designer of the Belle Epoque. Guests can admire the short cape in velvet with jet black pendants worn by the Marquise d’Aligre, described in ‘Remembrance of Things Past’. 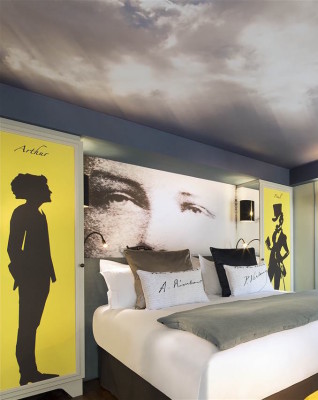 Les Plumes hotel in the 9th arrondissement honours the most emblematic couples and love stories of the 19th century. Each room is dedicated to a couple, decorated to represent their relationship and love story.

One of the most interesting rooms brings to life the turbulent liaison between Paul Verlaine and Arthur Rimbaud. It is a room “where the colours and fabrics evoke the wardrobe of a modern man. Absinthe, arguments…winks between poetic couples do not go unseen in this ultra-chic décor.”

The staff are dressed in period attire and offer a gorgeous looking breakfast of fresh pastries, eggs, bacon, sausages, cereals, fruits, cold meats and cheeses to fuel your romantic day in Paris. This is just the place for star crossed lovers and married couples, new and old. 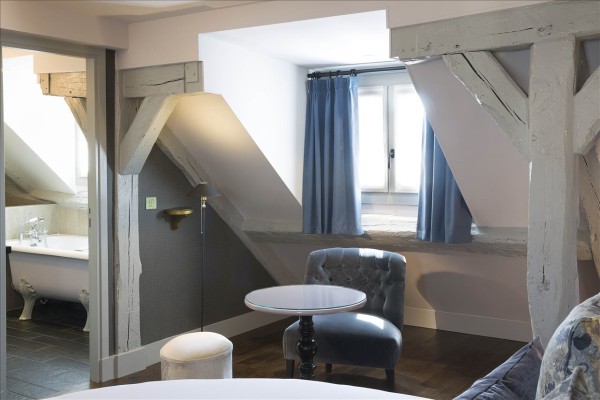 Have you ever visited any literary hotels? Which of these three tempts you the most? Let us know in the comments below!