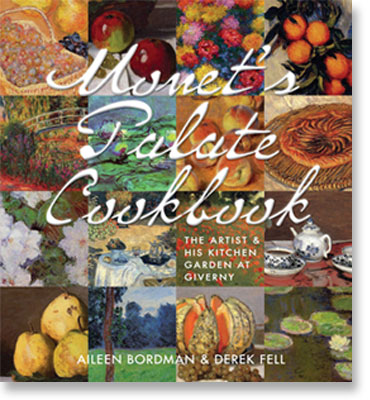 From the wordplay in the title to the collage of details from paintings by Monet on the cover, as well as the 38 featured recipes, ‘Monet’s Palate Cookbook’ is a delight for the senses.

The author, Aileen Bordman, was inspired by her mother to first create the documentary film ‘Monet’s Palate: A Gastronomic View from the Gardens of Giverny’, narrated by Meryl Streep who also wrote the foreword to this book.

Aileen’s mother, Helen Rappel Bordman, first saw an exhibition of Monet’s paintings in New York in the 1970s. Discovering that the house and garden where Monet had lived and worked was in a state of disrepair, she founded the volunteer program to encourage (mostly American) philanthropists to help with the restoration of Giverny. She has worked there herself ever since, assisting with the stewardship of more than half a million visitors each year from all over the world.

More than just a recipe book

‘Monet’s Palate Cookbook’ is an intriguing mix of stories about this part of Monet’s life in his now-famous house, and in particular, the fruit and vegetables he grew in his potager (vegetable garden). Although this garden no longer exists, co-author, gardener, and photographer Derek Fell has recreated the potager on his farm in Pennsylvania.

All the varieties of vegetables and herbs that Monet grew in his garden are featured in the book with full descriptions. ‘Monet’s Palate Cookbook’ also includes specific varieties and tales of how the artist grew and used them, as well as tips for constructing a modern day version of the potager (in quadrants, each planted with a vegetable ‘family’, rotated each year). 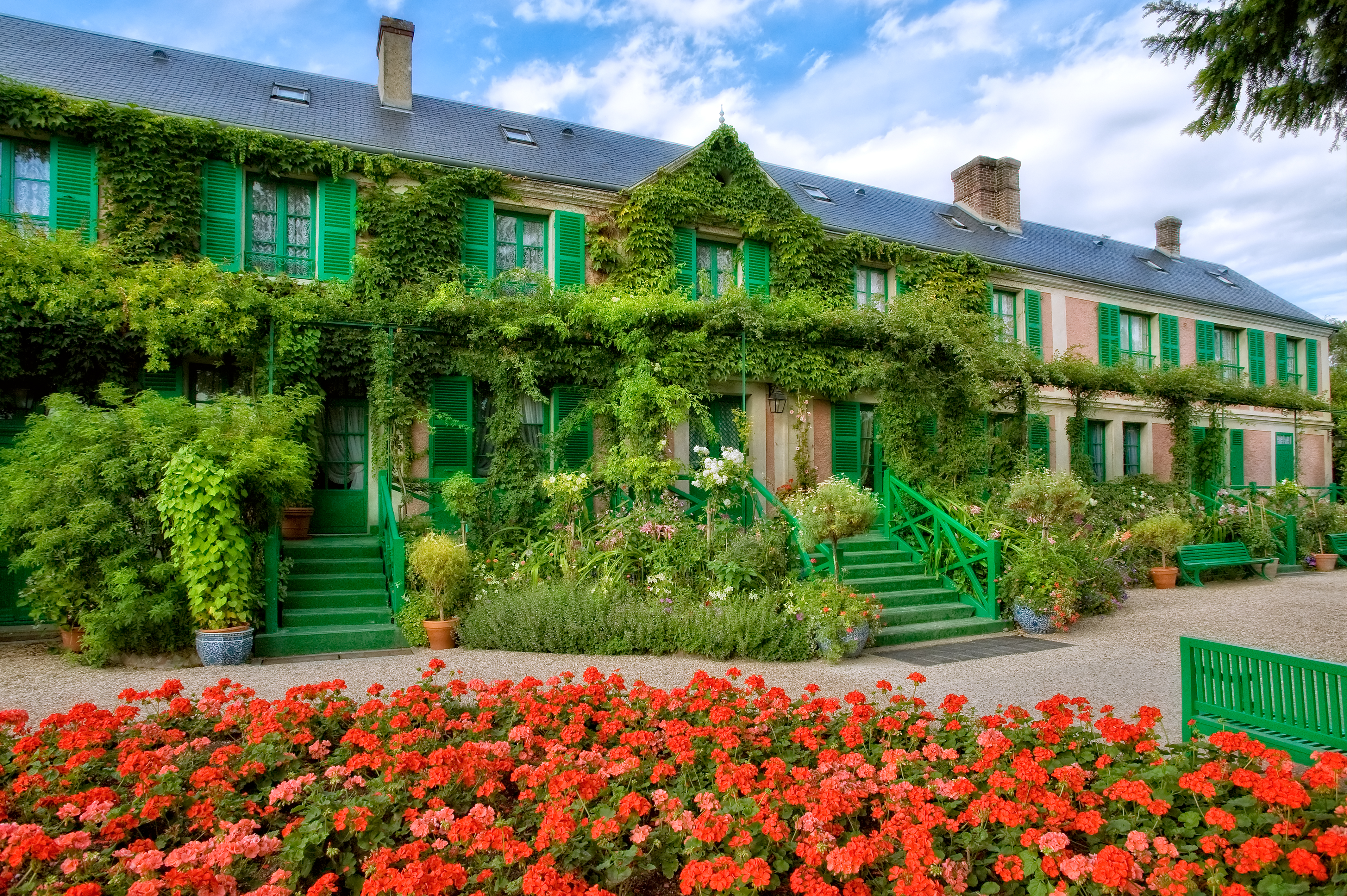 In 1883, when Monet was 43 and finally starting to earn enough money to enable him to support his family, he and Alice Hoschde who would become his second wife, moved to the Pink House in Giverny. The couple had been living together for several years, and with the eight children in their blended family, they stayed there for the rest of their lives.

A gourmand and bon vivant, Monet was able to live in the Giverny house in the style he had always wanted. But it would be some years before he employed gardeners; initially, the whole family helped to clear the ground and plant the gardens. After a few years, the potager was moved to the two-acre garden of another house he bought in the village. 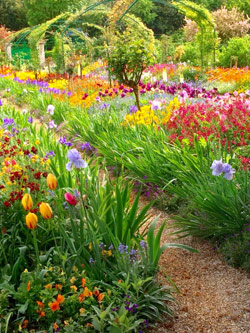 Monet’s passion for his flower gardens is legendary, and he referred to them as his main work of art. But his kitchen garden and his passion for growing food is less well known, and ‘Monet’s Palate Cookbook’ tells us the story of that passion.

I loved reading the story of how Monet would enthusiastically pore over the seed catalogues that arrived from both French and English seed suppliers, deciding which ones to order. Another story tells of his weekly lunch invitation he extended to the director of a large nursery that Monet patronised so that the two of them could discuss gardening.

The second section of the book comprises 49 recipes – divided into appetizers, mains, side dishes, desserts and cocktails. The recipes include many of French origin as well as others that Monet enjoyed, such as Yorkshire pudding, which he apparently ate at the Savoy Hotel in London and forms the basis for a ‘roast beef and Yorkshire pudding’ recipe. 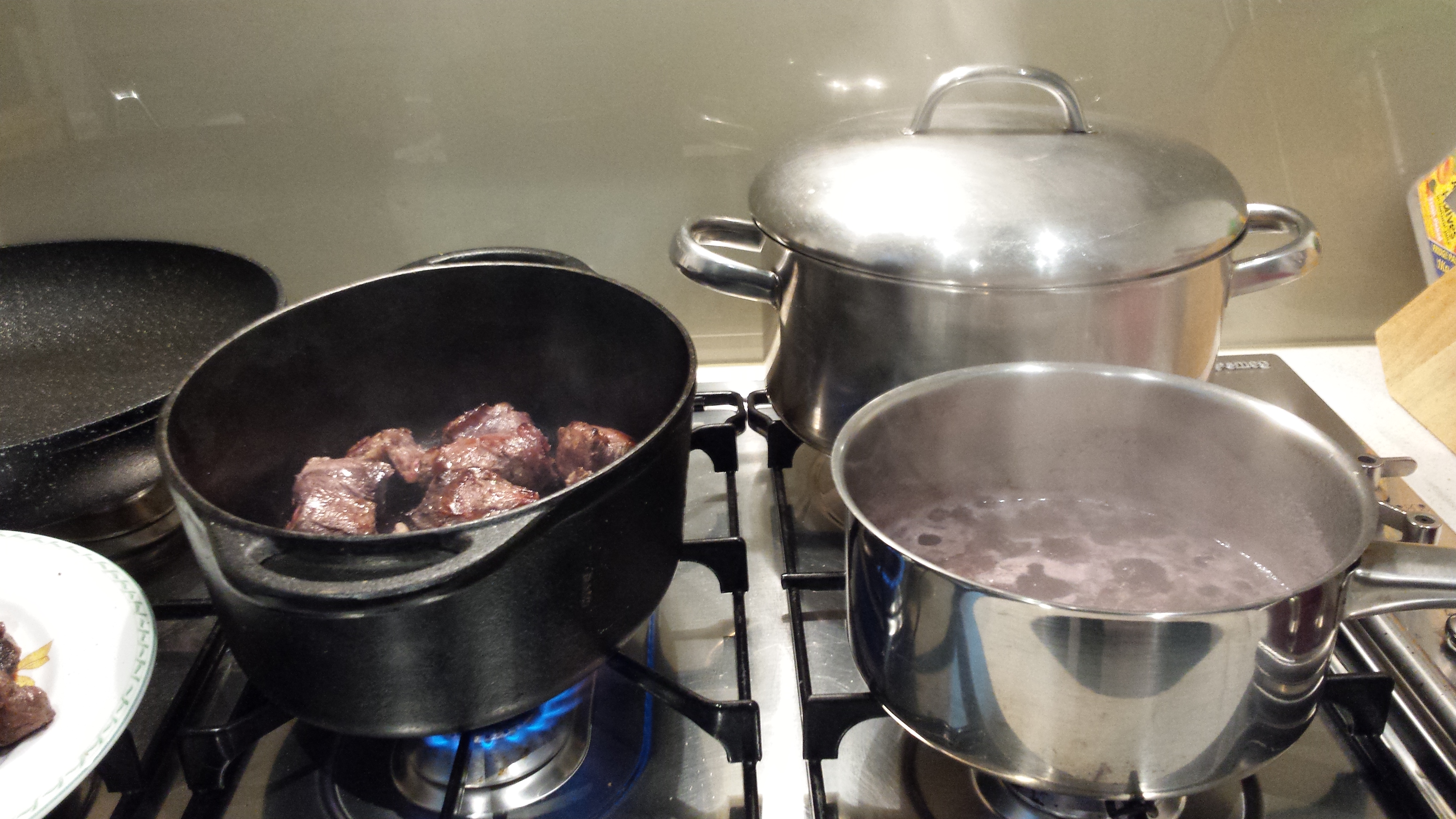 Other recipes were created by celebrity chefs who, inspired by Monet’s journals, prepared dishes to feature in the film mentioned earlier. Many of the recipes include snippets of stories; we learn for example, that Monet travelled to Norway to visit his son, where he “enjoyed painting snow scenes and feasting on wild Atlantic salmon.” Rather than being replicas of the dishes eaten in the Monet household – as the book’s title suggests – these recipes are inspired by the artist’s tastes and what would have been found in his garden. 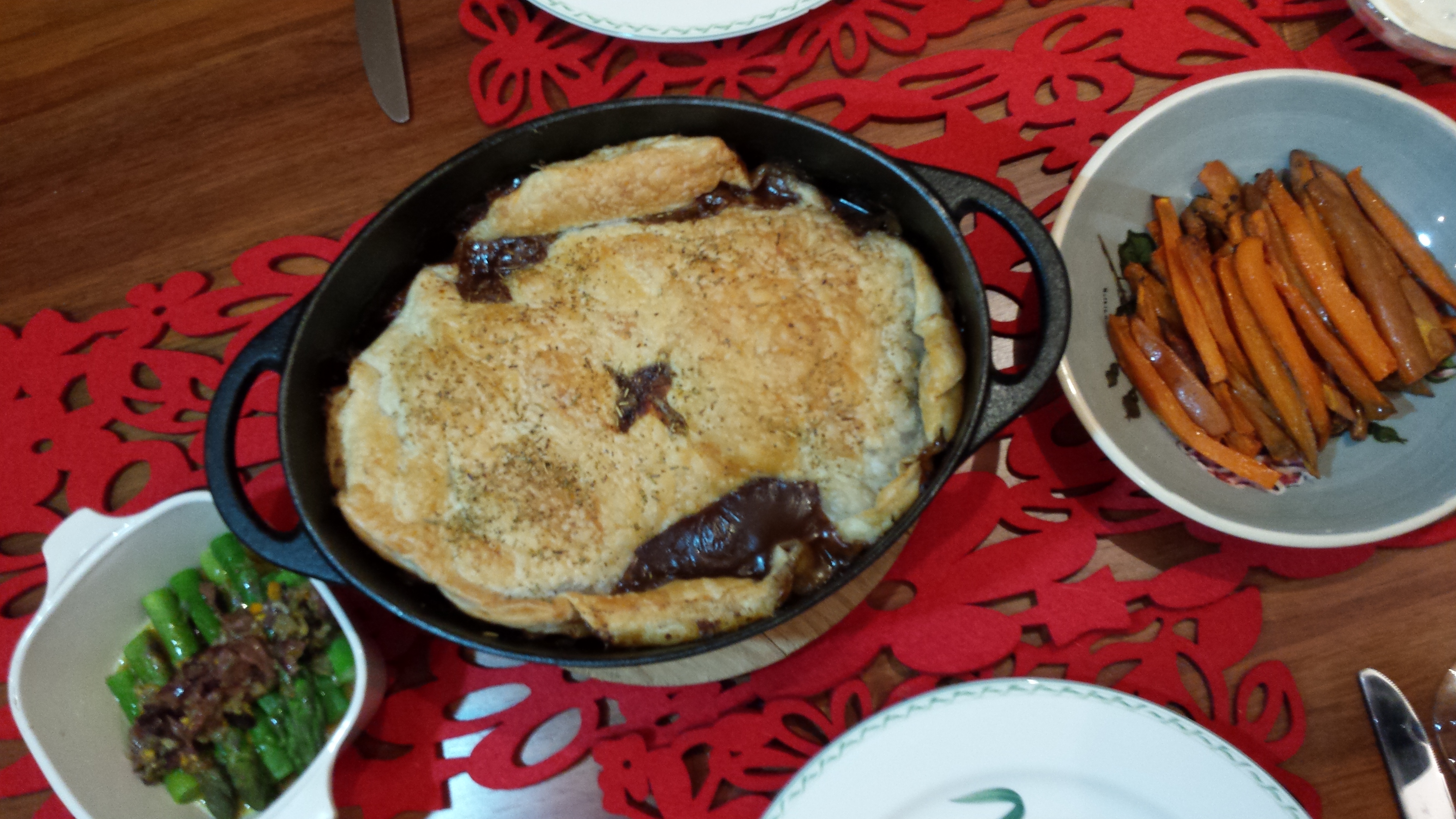 The Monet family would almost certainly have eaten Boeuf Bourguignon, so I decided that would be the first recipe I’d try. This version has a modern twist, as do many of the others, in the form of a puff pastry crust. To accompany it, I made two of the “garden-inspired side dishes”: baked sweet potato fries with horseradish sauce, and chilled asparagus salad with olives, capers and orange.

We have it on good authority that Monet enjoyed his asparagus “lightly steamed” (while the rest of the family preferred theirs well-cooked, necessitating two batches to be prepared!), as well as liking horseradish, however, sweet potato fries are surely somewhat twenty-first century. 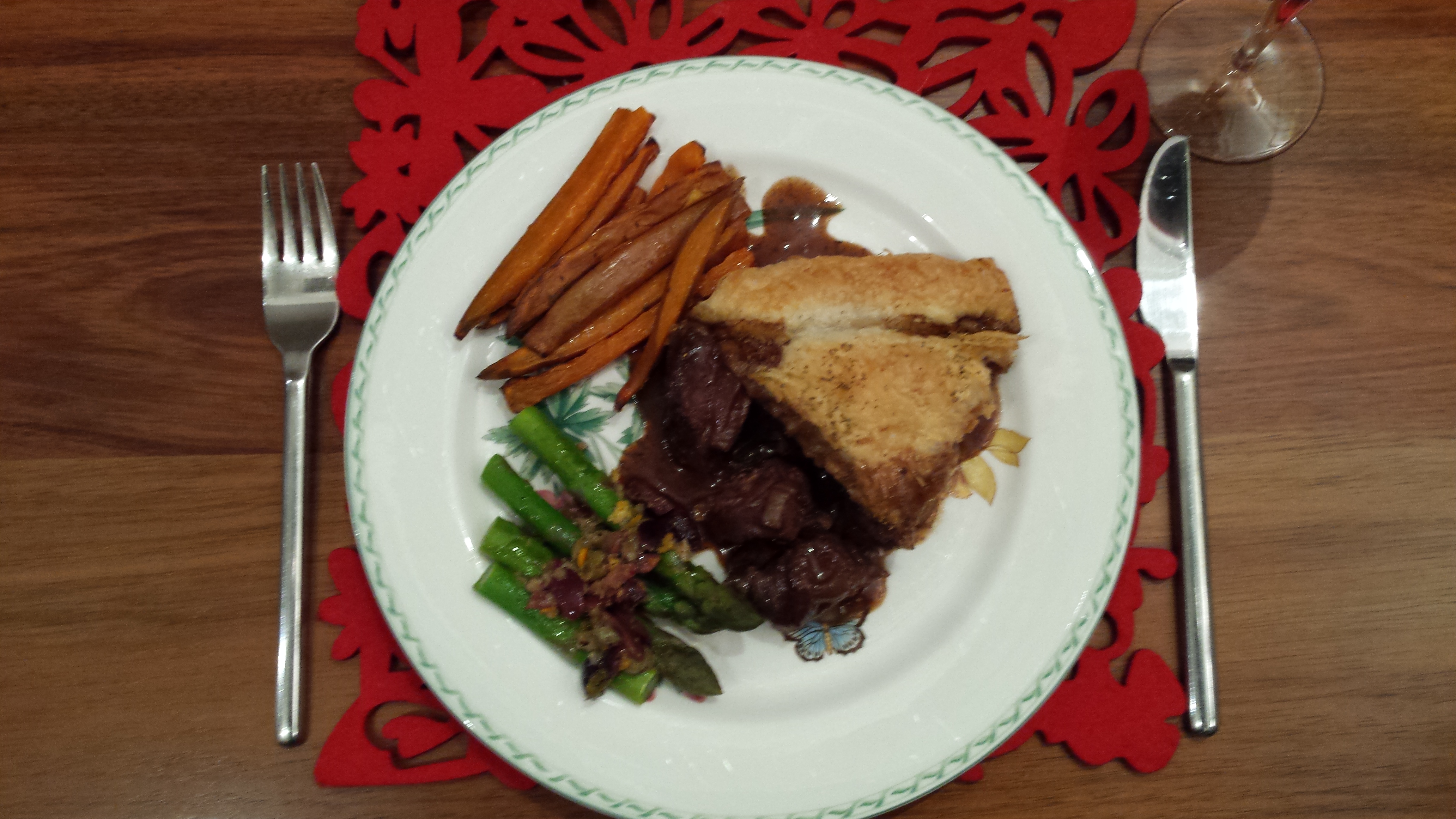 The sauce and the salad dressing were fiddlier than my usual cooking, but well worth it, adding piquancy to the meal to balance the subtle flavour of the Boeuf Bourgignon. The meat was very tender, and the flavours just right. My chief sampler pronounced it “the best dish” that I’d ever cooked, while the two side dishes were deemed “the perfect complements”.

French cooking purists may object to the many modernisations, especially in recipes such as the olive, capers and orange salad dressing; but this book is not about slavish ‘authenticity’. Bordman makes clear that ‘Monet’s Palate Cookbook’ is ‘inspired’ by Monet and by the idea of using fresh produce; whether grown in one’s own garden or obtained from farmers’ markets.

I visited Giverny several years ago, and this book makes me want to return. I’ll certainly be returning to the recipes.

Have you been to Monet’s Giverny garden or read the book before? What’s your favourite recipe from this book about Monet? Join the discussion in the comments.