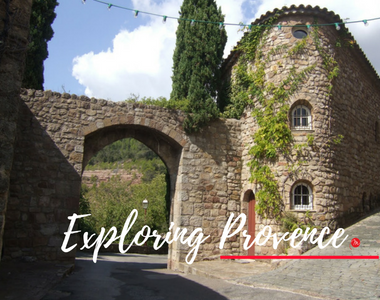 Exploring Provence: of rocks and stones – the medieval village of Les Arcs

I am often struck by the synchronicity that occurs in life. It happened after I was walking back to the town from the supermarket the other day and noticed how the medieval village – Le Parage – looked so ‘settled’ in its environment.

Its stones have weathered into their surrounds and in that light, the original town was barely distinguishable from its background, the tonal values being almost identical. In contrast, the newer parts of Les Arcs stand out with their brighter tiled roofs, pale pastel and ochre walls – not yet so perfectly at home in their surrounds. A favourite visual for me is the effect of raking light on an uneven wall, particularly the undulations of a stone wall.

So I thought, why not look at the stones in Les Arcs? The medieval village, known here as Le Parage, is built of ancient and weathered sandstone. And this is where the synchronicity came in.

In the local paper that same day, I saw there was an exhibition nearby based on the art of dry-stone walling across the Var. There are thousands of  crumbling dry-stone terraces here which were once built on the hillsides for vineyards and olive groves.

Then four days ago, scaffolding went up around the arched entry to Le Parage at the end of our street so workers could clean and repoint the ancient stones.

So I think I was destined to write about stones.

The art of medieval construction

I am not sure whether dry-stone was the original method of building when our medieval village was constructed. In some areas there is precious little mortar between the stones, but in others, there is almost all mortar, almost casually studded with stones.

The earliest buildings are constructed of large, square, softly-rounded and dressed stones, which must have been back-breaking to haul up onto the rocky outcrop where the village was established. Stonework in the buildings renovated since the 1960s has been beautifully done with great care to keep the village as authentic as possible.
Yet in the village – generally hidden from view – there are walls of pure rubble, rocks that appear to be tipped together without a thought of setting them straight or balancing them.

There is a different type of stone that forms the shallow steps that wind up and through the village. They are studded with mica deposits and glitter underfoot. I have also noticed this in other villages. Maybe this stone was mined in the Maures Mountains, which separate Les Arcs from the coast and are full of minerals, but that is another story!

It is true that in summer, at midday, the reflected heat from the walls and the ground can be overwhelming, but it is countered by the high, narrow passages, which encourage cooler breezes to twist refreshingly through the streets.

The medieval quarter is pedestrianised, but workmen use little motorised wheelbarrows to negotiate the steps for large or heavy deliveries.

Over recent centuries, Le Parage fell into disuse and by the 1960s the townsfolk and some of the council were considering pulling it down entirely. However one enterprising Mayor, M. Raoul Textoris (Mayor 1945–1971), initiated the restoration work.

A group, Les Amis du Parage, was formed to help save the village and preserve it for the future. They were more than successful. Gradually the old town was restored – and there followed an influx of people wanting to buy cheaply and renovate (the view is spectacular) – and this contributed to the fully restored village you see today.

Now a tourist drawcard, it is one of the best preserved – and fully inhabited – medieval villages in Provence.

It houses the starred Logis du Guetteur restaurant and accommodation, with regular art exhibitions and musical events in the Church of St Pierre du Parage.

Guided tours (in French), which tell the village’s history, the history of the Villeneuve family who lived in the chateau above and the story of its reconstruction – are offered regularly.

And I’m sure if the stones could speak they would have a lot more to add.

Have you visited any other medieval villages in France? What did you think of the wonderful architecture? Share your experiences below.