Torn between two loves: Paris and the South of France

Despite being the most memorable line from 1942 classic film ‘Casablanca’, this fiction-inspired wish has been in the back of my mind for the nearly two decades I spent outside my home country, perfectly aware that its significance had wandered away from its original WW2 contextual intention.

Paris has stood for the safe and desired haven I would always return to.

Almost split in two – my life in Paris vs the South

I was reading an essay in ‘The Guardian’ by American novelist Elizabeth Strout where she explained that she divided her time between New York and a small town in Maine and that it was a strange thing. At the time of reading the essay, this famous movie quote came back, almost taunting me with a slight streak of vengeance.

If I was particularly touched by her concern about discussing her ‘self’ as a writer in a big city versus the small town where she grew up, I was even more surprised to realize she was not questioning this way of life, i.e. living alternatively in two places.

Indeed, like her, I divide my time between a small town, where I am originally from, and a big city.

Guilt or longing: which is it today?

Similarly, I find it is a strange way to live, explaining why the point of view of the novelist appealed so much to me.

Additionally, most of the time, I feel guilt.

When I am in Paris, I have a pinch of remorse for all that I leave behind in the South.

Conversely, when I am in the South, I long for Paris. 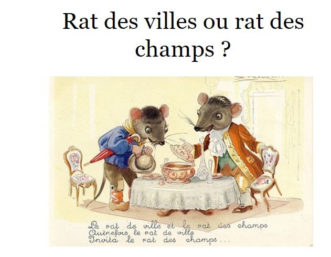 Obvious reasons account for this ongoing feeling of frustration, reminding me they had for long already been humorously listed by Jean de Lafontaine in the well-known fable ‘The Town Mouse and the Country Mouse’ without losing their actual accuracy.

Yet, if it was only for these – the advantages and drawbacks of life in a city – I might have adjusted more serenely with this dichotomous situation. But one person’s life is more complicated and we all have personal stories attached to places.

And that’s the point, for, at this stage, it’s not the 17th-Century French poem which applies better to my current angst but rather the 1930s – Josephine Baker’s song:

Tormented: two loves, two lives – should I stay or go?

So long as this predicament appears temporary, I can postpone dealing with an answer, as my husband and I had envisaged to settle for good in the South when he retires – like most reasonable people do. We would have the sun and the quality of life, what else could we hope for?

Despite that, as the deadline is approaching, I am not certain I want to stick to this decision any longer.

Two lives: am I both?

I spent my childhood in the small town of Frontignan, which, still a village at the time, was where both my parents were born, and the house I own now was built by my grandfather.

Although I was in my early twenties when I left my hometown to live in Paris, I have kept my Southern accent. When I go to the Saturday market place in the South, I chat and laugh with people I went to school with.

I totally blend in and I enjoy that.

I first lived in St Germain-des-Prés and in the late 90s I opted for the right bank where the family could live in a ‘big enough’ apartment that would still be central.

I studied and became a teacher with tenure in Paris. Both my sons were born in this city.

Contrary to the quasi-celebrity status I enjoy in my small southern town, when in Paris I totally melt, disappear even, quite unknown in the Parisian crowd and I enjoy this too.

Two lives: how can I be both?

Elizabeth Strout admits that she would not have been a writer if she had not lived in NYC. Yet she mostly writes about the people of her native Maine region.

From this admission, I take it that instead of focusing on what I lose each time I hop from one place to another I’d do better to appreciate what I gain.

Eventually, perhaps I can have the South and Paris.

Have you ever been torn between two lives or even two loves? How did you overcome the feeling? Share your thoughts and experiences with us in the comments below!