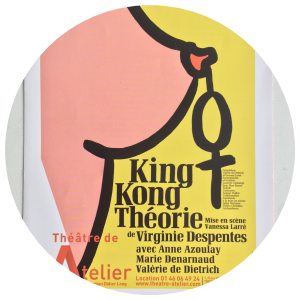 From the 4th October 2018, a theatre adaptation of Virginie Despentes’ 2006 book King Kong Théorie is showing at Théâtre de l’Atelier in Paris. A charged, honest and often humorous text, the book is a part-autobiography, part-manifesto which centres on women’s experience, sexuality, gender and the often-violent relationship between masculinity and femininity.

The play is often unsettling, brutal and raw. Nonetheless, it remains exciting and enjoyable to watch. Much like the book, some moments are even humorous – whether that be nervous or genuine laughter – often about the cynic outlook of society and women’s place within it.

The play covers rape, prostitution, pornography. Fundamentally, it asks: ‘what is femininity’ and puts into question what type of society we want for tomorrow. 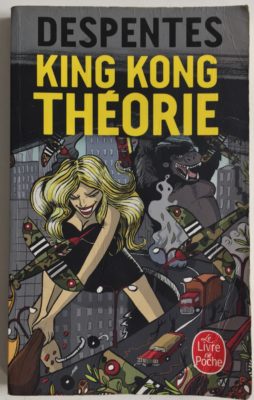 The play centres around the confessional monologues and interactions of the three actresses on stage, each a manifestation of Virginie Despentes’ voice and experience. These actresses – Anne Azoulay, Marie Denardaud and Valerie de Dietrich – appeared first on stage in punk-style attire, much like Despentes herself. Opening the show, they each in turn spoke the words from the opening pages of King Kong Théorie:

From the start, the audience is forced to reflect on the idea of gender and femininity. And this was just the beginning.

The mise en scene is simple. A stage lit dimly with an overhanging red light, a few chairs, two lockers, a guitar. The simplicity of the set up allowed the focus to be on the women, and importantly, their words.

Perhaps the most unsettling moment in the book is translated beautifully, for lack of a better word, for the stage. Announced as an event from “Juillet 1986” when Despentes was just seventeen years old, each of the actresses launch into a monologue recounting the story.

Unsettling background music and a screen projection of a parking lot set the atmosphere: disturbing. This scene is an autobiographical account of Despentes and a friend being raped one night when they were hitchhiking. 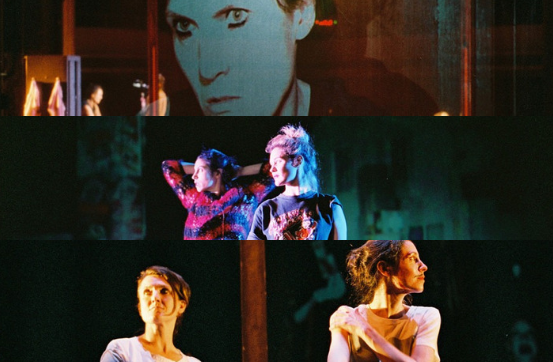 Azoulay and Denardaud come close, hold hands, then gradually separate as the story unfolds. De Dietrich sits in the background, staring into space, as if this part of Despentes’ struggles to vocalise or engage with the memory. The women smear blood on one another. These stains will remain on the women throughout the play. For me, this is a gesture which symbolises the effect such an event has on a woman for her whole life. Simultaneously, it represents the unity of these women who, as the play states, are ‘victimes ordinaires.’

De Dietrich changes from a masculine attire to a red mini skirt and heels. The women produce monologues of the experience of working as a prostitute. They recall Despentes’ words:

Denardaud removes her shirt. The dialogue centres around the overwhelming sense a woman has of being present and of her body being watched. Her sexuality being the centre of attention. The camera films the audience; we also feel the sense of being entirely present as we watch ourselves being watched. 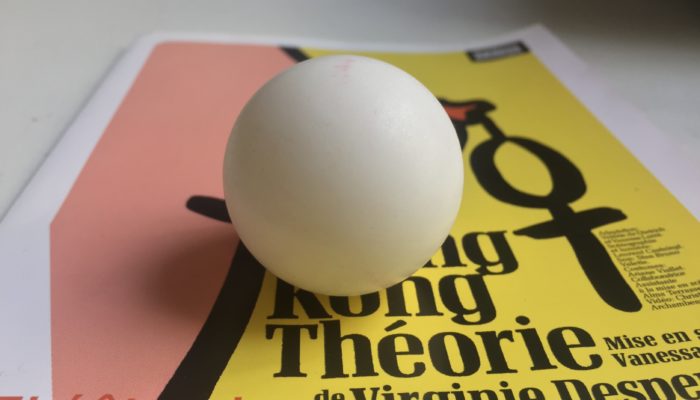 Moving on, the scene that correlates to the chapter ‘King Kong girl’ becomes less personal and more philosophical. An image of Skull Island – that from the 2005 film – is projected at the back of the stage. Azoulay, in a blonde wig and pink dress, represents ‘la belle’ next to the bête, King Kong. I remember how the words at this point resonated with me as the intellectual core of Despentes’ text was read aloud:

‘La belle’ is dressed in a pretty pink dress while sporting a drawn-on moustache. This gets quite a few laughs. The other two actresses change back into more androgynous attire: jeans and t-shirts. A man’s blazer. It is at this point in the production that the optimism, or at least hope, for tomorrow’s society comes to an apogee. The idea of binary oppositions in gender are deconstructed both through the dialogue and the visuals.

I can confidently say I was never bored watching this production. In fact, I was completely engaged. The choice to have three actresses portraying Despentes’, her voice and her outlook, was outstanding. Their interaction with one another on stage – sometimes entirely cohesive, sometimes questioning one another – expressed the internal dialogue of a woman coming to terms with her personal life and past, as well as her relation to the society in which she lives. What’s more, each one of their performances was absolutely faultless. 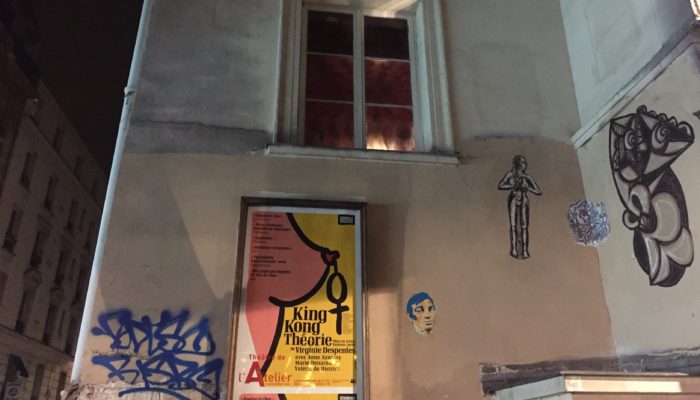 If they talk about putes (whores) and bites (dicks) a lot, it’s because this is the language we use when discussing sex and sexuality. It’s honest – a militant text that uses ‘real talk’ to present problems and hypocrisy in society today. It’s the reality of not just Despentes’ life, but a wider relation between men and woman and their relationship to sex, sexual identity or representations of masculinity and femininity. The play was raw, it was simple. It was to the point. Sometimes shocking. Sometimes uncomfortable. And yet, there are sparks of humour amongst intense monologues.

Finally, Bravo to Vanessa Larre for putting together the theatre production of this book. It guides your emotions to naturally react to and reflect upon what is in front of you – making you feel a certain way before you even realise it yourself.

Have you read or seen Despentes’ King Kong Théorie? Or perhaps some of her other work? We’d love to hear your thoughts and reflections in the comment section below.