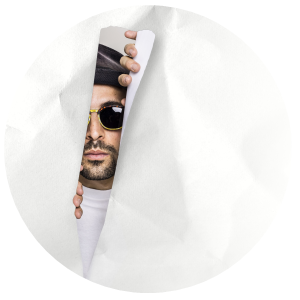 This famous French artist started his career in the streets, and today his work is being honoured at the Musée Européen de la Photographie in Paris.

An exhibition 100% dedicated to his work, ‘Momentum, la mécanique de l’épreuve’, is a wink to the dynamic of this young creative’s artistic process.

This immersive exhibition gives the opportunity to discover JR’swork from his beginnings in the street to his latest creation: the movie ‘Visages Villages’, starring Agnès Varda.

Born in 1983, JR began using the street as his  canvas at fifteen years old, by signing his name on buildings and Parisian tunnels.

Then a few years later, photography came to him  when he found a camera in the metro.

Attracted by the world where he first began as a street artist, he made public space his playground.

He met people to photograph while he was travelling around Europe. These strangers would find themselves ‘centre stage’, thanks to his black and white collage style.

Immense photographs, that were plastered across public structures: facades of buildings such as the Louvre, the roof of a slum, and also a container ship longer than 360 meters.

He seeks to have an impact on people and raise their awareness.

An activist at heart, JR uses the street as an open-air art gallery, accessible to everybody, all of the time.

Jean-Luc Monterosso , the CEO of MEP, had followed the photographer’s work for a long time, devoting, for the first time, all exhibition rooms of the museum to JR’s work.

So much more than an exhibition of clichés.

‘Momentum’ will expose you to JR’s creative process. You’ll learn about both the technical aspects of his work, and how he reflects, so as to successfully impact his public and communicate his strong messages.

From ‘portraits d’une génération’ to ‘Wrinkles of the city’ through to ‘Women are heroes’, you will discover a wide range of new, old and unpublished work.

Famous for these immense collages, this exhibition will also introduce you to some of his moving creations, such as as ‘Eyes on Boat’. 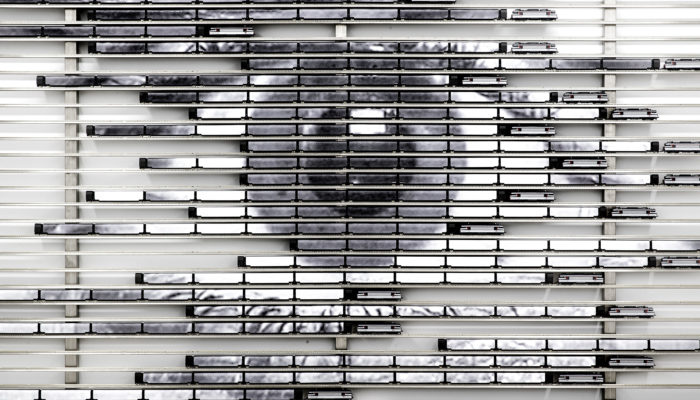 On 1455 containers, JR displays giant collages of women whose lives have been destroyed by conflict and war. In doing so, their stories will travel across the world along with the containers.

Thanks to this exhibition, you will, for the first time in Europe, have the opportunity to discover, the last human-focused project by JR: ‘The gun Chronicles: a Story of America’.

In collaboration with Time magazine, this animated work highlights various opinions around the debate of carrying arms in the USA. The exhibition results from the interviews of more than 200 American citizens. Interviewees from all walks of life and all were concerned with this issue: doctors, teachers, victims, arms collectors and even police.

There are so many testimonies that you can listen to, thanks to a dedicated App – JR murals – The wonder of the project is that it takes no position on the matter – all sides are represented. The app shows the wall and allows you to select any one of the subjects to learn about them and hear what they have to say. An extraordinary project and an equally extraordinary app!

The exhibition in two words?

It gives you a 360° perspective of this incredible and unique artist. Don’t miss it.

Have you ever seen any of JR’s work before? Eager to check out the exhibition? We’d love to hear your thoughts and reflections in the comments section below!