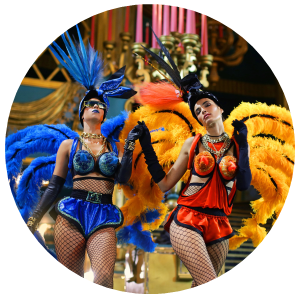 Labelled as such by the media, the French designer Jean Paul Gaultier has once again surprised the public with his first ever theatre show.

During the two-hour production, you’ll discover the hectic backstory of the artist in the mythical setting of les Folies Bergères in Paris.

This is a first for the designer, who takes us away in a whirlwind of joy and artistic wonder with this show: Fashion Freak Show.

In the words of the creator to describe his first production: ‘I wanted to share and show that whoever you are, the doors are open. Be yourself, it’s perhaps the best thing in the world.’.

It took more than two years of work for him to achieve the surprising result: a daring and refreshing show which mixes dancing, singing and visual art.

From a very young age, Jean Paul had been thinking about this dream.

It was the era of his first model – his teddy bear ‘Nana’ – the famous Josephine Baker, and films such as Jacques Becker’s ‘Falbalas’.

It’s a crazy show which is full of life, breath-taking costumes and lively music. All these elements connect both the public and private life of the designer in full transparency.

We discover the true life of Jean-Paul Gaultier. From his first creation on his bear, Nana, to his international success as a haute-couture designer, passing through his love story with Francis and his homosexuality.

There are 15 artists who come from all over the world to create the different scenes (including Australia; the JPG role is portrayed by Patric Kuo, an Australian dancer).

There are dancers and singers… but that’s not all!

The designer called upon some of the most unique people in the world of performing arts for the show. Models, acrobats and some guest stars – amongst them, the famous, American pin-up artist Dita Von Teese. 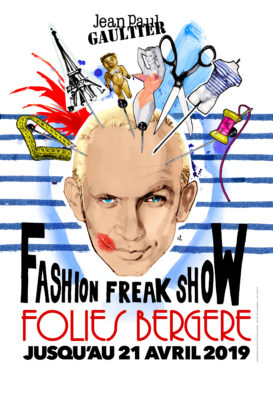 Not forgetting his roots and those close to him, the artist also called upon a few loyal friends. He put them in the show through quirky and humorous videos, which fits in perfectly with the show’s digital scenography.

To step up to the challenge, JPG assembled the best of the best. Amongst them,

“Authentic, magical, fun and entertaining are just some ways to perfectly sum up this show. “

Here you can view the trailer:

Have you already seen the Fashion Freak Show? We’d love to hear your thoughts in the comments section below!