Bordeaux green movement challenged: How far is too far?

Southwestern Bordeaux is a dynamic and progressive city. Local coffee shops, organic eateries, and numerous green spaces make it an écolo-bobo paradise. Recently, Bordeaux’s politics turned progressive with the election of the city’s first green party mayor. However, not all residents are on board with the Bordeaux green movement.

Nicknamed la belle endormie, Bordeaux was industrial and run down in the past. In 1996 thanks to Bordeaux Mayor Alain Juppé, (1995-2004 & 2006-2019) Bordeaux began a renewal program, consequently transforming itself into a more attractive and innovative city. Since then, Bordeaux attracts tens of 1000s of visitors every year. Additionally, it has received multiple accolades such as ‘best place to work’ in 2014 and Lonely Planet’s ‘best city to visit’ in 2017.

In short, Bordeaux has come a long way from its industrial past. The overall revitalization plan of Mayor Juppé in the 1990’s included the first steps towards a greener city. For example, he transformed the riverbank into an enjoyable space for pedestrians and cyclists.

The famous and impressive reflecting pool mirroir d’eau was formerly a parking lot for the industrial riverbanks.

Tourists often come to take photos and residents enjoy the nearby gardens while watching their children play in the water.

Bordeaux joins other large French cities such as Paris, Lyon, and Marseille in the ‘green wave’ currently sweeping France.

In the recent 2020 municipal elections, Bordeaux elected Pierre Hurmic of the Green party after 73 years of right-wing mayors. As a result, Bordeaux is poised to continue its green initiatives.

The Bordeaux tourism office has begun a campaign for sustainable tourism. Clicking on a green leaf symbol on their website gives access to all kinds of ways to have a sustainable vacation in Bordeaux and the surrounding area including:

Crossing the river from downtown Bordeaux on the rive droit is Darwin. Once military barracks, this popular site in the city has been transformed into a sort of ecological village. Darwin is a place to work, eat organic food, discover art, and to participate in eco-events. 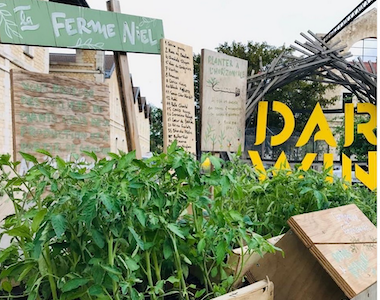 I found myself wondering: How far is too far with the Bordeaux green movement?

Residents of Bordeaux benefit from the ecological infrastructure in the city, and they clearly support the green party. However, this movement may be challenged by French tradition.

Pierre Hurmic, the new mayor, (July 2020) announced that he would not put up Christmas trees in the city this 2020 holiday season. Typically, a 17-meter-high tree stands prominently in front of the city hall. Hurmic stated, “we will not put dead trees onto our market places because it’s not the way we see revegetation.”

But after all, the arbre morte in Place Pey Berland is a prominent symbol of Christmas that residents have come to expect. This Hurmic announcement sparked a substantial backlash from residents and fellow leaders. For instance, politician Marine Le Pen criticized him for trying to destroy French traditions.

Hurmic stated that there will be live holiday shows instead of the tree, but many residents aren’t accepting this replacement. There’s even a petition that has already gathered 16,700 signatures demanding that the tree tradition should continue. Residents are requested to sign to prevent Bordeaux from becoming un ville triste.

Is the decision of Hurmic, the Mayor of Bordeaux triste or rather, forward-thinking? What do you think of the Bordeaux green movement? Please share your thoughts in the comment section below or on Twitter @maviefrancaise