I was lucky enough to spend an afternoon with world renowned, award winning Parisian chef and restaurateur, Gilles Epie.

He is still the youngest chef to ever receive the Michelin Star, at age 22. I became familiar with Epie as head chef at Los Angeles’ L’Orangerie, where, after only a year in the States, and hardly a lick of English, he was voted ‘Best Chef in America’ in 1996. He took that establishment from a three star to a five star restaurant within six months. For the next ten years, he cooked for presidents, kings and celebrities, including Sophia Loren, Princess Diana and Slash. He catered Frank Sinatra’s 80th birthday party.

Epie says that for New York’s Studio 54’s New Year’s Eve party for the new millennium, his company flew in 200 bottles of private-label French champagne and 250 kilos of Beluga Caviar.

He says, however, that his favorite patron is his now wife Elizabeth Nottoli. This American supermodel and actress joined forces with her husband as a restaurateur in Paris’ Citrus Etoile six years ago.

The restaurant is going from strength to strength. Gilles explains that the secret to a great dish is using fresh ingredients. He goes to Parisian markets each day and buys seasonal fruits, vegetables, and meats du jour, the latter of which often still have the heads on, because it shows freshness. “French people, they don’t buy the pigeon if there is no head on it.”

For a fresh fish, look at the eyes, Epie suggests. Except, monkfish: that is displayed at the market without its head.

“The head on a monkfish is really ugly. No one wants to buy a really ugly fish.”

Our discussion jumps back to his time in America. I couldn’t help but ask if he’s ever been to McDonalds.

“Oh yes, many times in the States I would take my son. Their fries are better in The States than in France.”

So, would he come back to America someday?

“I want to come back, open another restaurant and live near the ocean.”

Yes, please! Until then, see you in Paris! 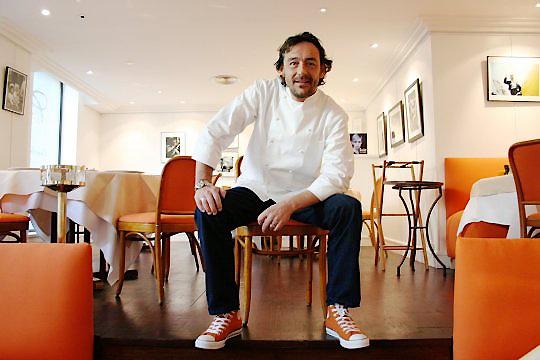 For more on Gilles and Elizabeth Epie & Citrus Etoile visit their website CitrusEtoile.com