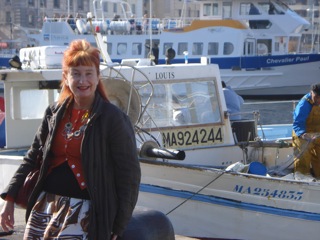 The minute you hit Marseille, the oldest city in France, you know you’re in for fun.

It is ‘sizzlingly’ different from the rest of the country and there’s no other city like it. It was known to be tough, rough and dangerous, a sailor’s port town, full of Arabs and goodness knows what exotica. Now it is more sophisticated and a lot of money has been spent fixing it up. I like a city with guts, independence, sex appeal and a strong personality. Marseille hits you between the eyes and it is addictive. Marseille would be the man you had a passionate affair with.

So it was quite hallucinating to find myself in Carot, the biggest professional cooking school in Marseille, with an All Black* on either side of me, telling some of the top chefs and sommeliers in Marseille how to suck eggs, or more precisely how to wrap nuggets of New Zealand venison in grape leaves and throw them on the barbie.

Shall I tell you what rugby players of this level look like? This is only for the benefit of those readers who, like me, don’t follow rugby but who often wondered about this alien species. They are a bit like the lamb racks and venison I was cooking – properly aged with no short cuts, they have no extra condition, no fat and are delicious, sweet and tender when you bite one on the arm. The whole of Marseille is hopelessly in love with ‘Les Blacks’ and the feeling is mutual. The French newspapers say they are loved, not only because they are super-sportsmen but because they are polite, nice and open to everyone they meet.

So there I was, teaching French journalists and chefs how we cook mussels, lamb, venison and apples with one of the most famous chefs in the south, Francis Robin, as my assistant, when these two beefy blokes front up wearing toques (chef’s hats) and black aprons. Their arrival at my work space coincided with an extraordinary power surge of flashing cameras! Every time we tried to stuff a mussel, we had to smile; the purple Maori potatoes which they call vitelottes in France caused a tsunami of approval; the strict French chefs got tight lipped about our casual attitude and the fact that I and Isaia Toeava threw parsley over our shoulders. They did manage a smile when Anton Oliver and I did the three kiss thing.

When the journalists asked Anton what his favourite meal was he said New Zealand lamb and a simple salad. When they asked Isaia, to his great credit, he said corned beef and taro. Some of the froggies turned their noses up at my Asian inspired dressing for the salad but I explained that in New Zealand we borrow from a lot of cultures, so to have mediterranean sumac on the lamb, Nuoc Mam (fish sauce) and sesame oil in a salad which also contained purple potatoes and mangetout (snowpeas) was not out of the ordinary for us. Vivre la difference!

*New Zealand men’s national rugby union team is often called the All Blacks because they wear all black (jersey and shorts) except for the silver fern.

1. To make the dressing combine the first 8 ingredients in a large bowl and whisk well.

2. Scrub the potatoes gently and boil till soft in salted water. Slice thickly.

3. Blanche the snow peas by plunging in boiling water for 2 mins. then rinsing in cold water. Drain.

4. Remove the broad beans from their pods and boil for 4 mins. Drain and peel the skins off. If they are frozen, boil for 2 mins. then peel.

6. Blanche the tomatoes in boiling water for 1 min., drain and peel.

7. Wash the greens and mint.

8. Sprinkle sumac over the lamb racks and roast in the centre of the oven for exactly 20 mins. Remove from oven and allow to rest while you put the salad together.

9. With your hands, gently toss the leaves, mint, beans, potatoes and snow peas in the dressing.

To serve: Slice the racks into cutlets. Gently share out the salad mixture onto six large dinner plates, alternating with the cutlets, rearranging things if necessary to please your artistic nature. Place 4 tomatoes around the edges of each plate.