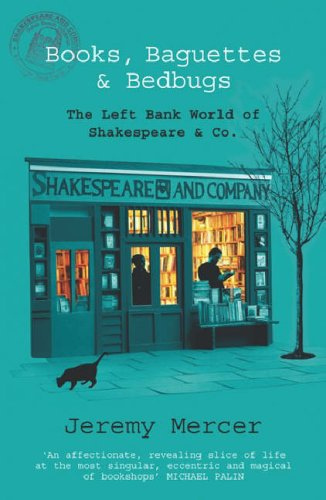 In Books, Baguettes and Bedbugs: The Left Bank World of Shakespeare and Co., an altercation with a source sees Jeremy Mercer quit his job as a crime reporter and fly to Paris. He doesn’t have a job, a visa or a plan. He stumbles into Shakespeare and Co., the legendary English language bookshop and soon joins other budding writers who ‘pay’ to stay by working at the store and promising to read a book a day. They hope to emulate previous residents Ernest Hemingway, James Joyce, F. Scott Fitzgerald, Allen Ginsberg and Anais Nin.

Mercer likens the ramshackle bookshop/hostel to Alice in Wonderland. The store’s cat winked at him; the rooms are like rabbit warrens and a ‘haphazard collection of people… a number of whom I would classify as extremely unusual’ have ‘tumbling’ conversations at the Sunday afternoon tea.

George Whitman has run the store since 1951. Mercer explains that Whitman opened it after the death of Sylvia Beach, who founded the first Shakespeare and Co. in 1919. Whitman bought her collection of books and on the 400th anniversary of Shakespeare’s birth opened his store. Although events like Sylvia Beach spending World War II in an internment camp and Hemingway liberating the premises in 1944 are fascinating, it is quite a dry retelling and largely confined to one chapter.

Fortunately, the personal histories of the store’s characters, notably Whitman, are more interesting. Whitman hates money and dreams of his estranged daughter taking the helm. While he accommodates an ever-changing group of people, he is moody and plays favourites; “even if Shakespeare and Company appeared to be a happy commune among the books, it was clear there was still some sort of social hierarchy…”. Mercer also struggles with Whitman’s unwavering support of communism.

I would also call Whitman manipulative and authoritarian. For example, he makes Mercer kick out an elderly poet who’s been living there for five years. When Mercer tells the night watchman, the worker says, “That sounds like George… He puts people in these awkward situations just to see what will happen.” Whitman also steals people’s personal letters, and when Mercer confronts him about it, he says “You wouldn’t believe the time I spend searching around for the diaries of the girls who live here.” Mercer soon realises the Shakespeare and Co. experience is great while you’re in Whitman’s good books. Miss scrubbing a square centimetre of the store’s floor and you’re an ‘idiot’, ‘imbecile’ or ‘nincompoop’.

Whitman’s overbearing personality makes Shakespeare and Co. sometimes sound more like a cult then a commune: “George, he’s a great man, a great man”, says Kurt, a failed screenwriter, while showing Mercer the spot where he is going to get a tattoo of Shakespeare and Co. Later, a young woman, under ‘the bewitching grip of alcohol’ whispers, “I adore George. He’s the greatest man I’ve ever met.”

Whitman can also be funny (“My eyes opened and George was standing over me with his flashlight on high beam and a wicked grin across his face”), sensitive and romantic.

Mercer refers to Shakespeare and Co. as a refuge and parallels are drawn between the benevolence of Whitman and that of the church, symbolised by Notre-Dame. Mercer reveals that his experiences with alcohol, other drugs, reckless behaviour and even violence, pushed him to seek sanctuary in Shakespeare and Co. But to live there for more than a few weeks or months seems escapist.

Shakespeare and Co. is dirty and chaotic. Mercer has to wash himself in a café’s bathroom, and gate-crashes student cafeterias, buys mouldy baguettes, takes money from the store’s wishing well and partakes in illegal scams to get by.

Books, Baguettes and Bedbugs is an interesting insight into one of the world’s most famous bookshops. It also shares intimate portrayals of the man behind the store and a young man pulling his life away from a path of self destruction.

Mercer explains how his job as a crime reporter numbed him before he came to Shakespeare and Co.:

“Working in a newspaper, the art of language becomes obscured by the daily ritual of flushing out thousand words of copy… I became a cheap magician who knew that with a bit of dexterity and practice one could conjure up drama. Tragic accidents, grisly death, devastated mothers – the hyperbole of daily crime reporting turned writing into a Lego exercise requiring blocks of strong adjectives and simple nouns.”

This also highlights one of Books, Baguettes and Bedbugs‘ major weaknesses; Mercer did not shake the reporter’s style – some of the stories are tied up too neatly, there was some cliched use of language and clumsy metaphors. More time spent on the central character, Jeremy Mercer, not just cataloguing his past indiscretions, might also have made Books, Baguettes and Bedbugs a more engaging read.