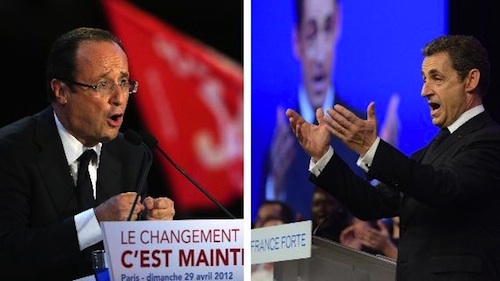 France is living a crazy two weeks between the first and second round of the presidential elections. In this entre deux tours, Nicolas Sarkozy, François Hollande, the media and the unions have entered a frantic race of communication to alert, awaken, sometimes frighten and seduce the electorate through all means possible. We are far from Barak Obama’s one man shows and American jokes, but political campaigning in France is also forging new routes in 2012.

These days we are receiving an overdose of radio/TV coverage, daily changing poll estimates and roadshows across France. And don’t be surprised if they knock at your door – the porte à porte method has shown good results thanks to hundreds of volunteers. Hollande’s objective is to open five million doors in two weeks, while the Sarkozy team claims to have organised one trip a day across France to meet the population.

Not to forget the new media armada, a very active front on which the two finalists are also competing: Sarkozy, with the campaign banner ‘La France Forte’ (‘A strong France’) has 617,870 ‘likes’ and 58,932 people talking about his Facebook page, and 191,150 Twitter followers.

New media and social networking definitely have a role to play in these elections. Facebook for instance has more than 24 million users in France¹, i.e. 37 % of the population.

More than 20,000 people attended Hollande’s  meeting on 29 April, at the Bercy Hall in Paris, while Sarkozy gathered 12,000 supporters at the Toulouse Parc des Expositions, before his ‘mega show’ scheduled for 1 May (Labour Day), in front of the Eiffel Tower.

Sarkozy and Hollande battle it out

The battle goes on on TV also. TF1 (a privately-owned channel) and France 2 (the second channel, which claims to be the first “public TV channel”) are fiercely competing to get exclusive interviews and entre deux tours political debates with both candidates, their opponents, their supporters and their teams. 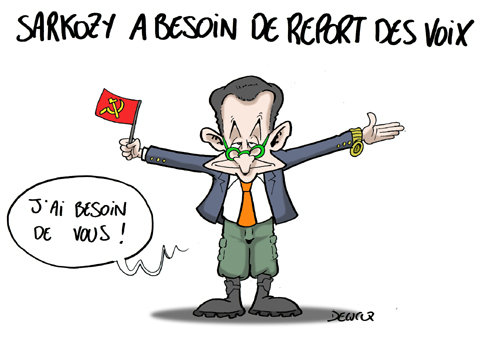 France 2 managed to get both candidates on-air separately in the same show ‘Des paroles et des actes‘ (‘Words and Deeds’) and this Sunday evening two mirror interviews on prime time TV showed a more private side of the opponents.

Their answers (as well as their non-verbal communication) were eye-opening. One could wonder who is the challenger and who is already in the presidential position. Media training has certainly been intensified in recent weeks.

But the real fight (le grand débat) has just taken place and was co-organised by TF1 and France 2. In the lead up to this debate both candidates continued to ‘sell’ their respective programmes while attacking each other via the media. 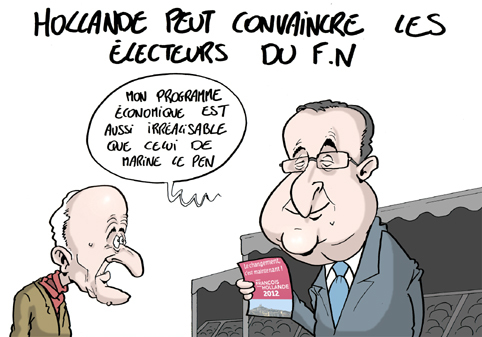 They need to craft alliances with the various other parties to reach the desired number of voters. They are particularly interested in the 6.5 million French people who voted for the ‘Marine-blue wave’.

If you can’t wait till Sunday, you can always contact Madame Rose, a fortune-teller who said in a recent interview that Nicolas Sarkozy would be re-elected “by a hair’s breadth”²…

Fortunately we have still several days to make up our minds and change the fate of France, in one way or another.

This is the first in a three-part series on the 2012 French presidential election by Marianne.

Carousel source: Hannah Charbit: ‘Who is worthy of raising the Tricolore?’