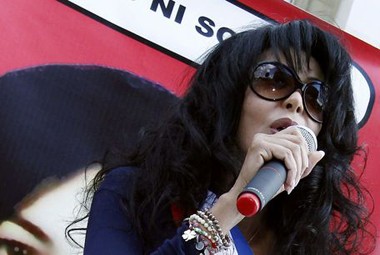 Film director Yamina Benguigui (C) delivers a speech near Sihem Habchi (L), President of the French Women’s rights association “Ni putes ni soumises” (Neither whores nor submissive) and Iranian journalist Anna Pak during a demonstration on August 28, 2010 at the Trocadero esplanade in Paris in support of Sakineh Mohammadi-Ashtiani, 43, sentenced to death by stoning after an Iranian court found her guilty of adultery and complicity in her husband’s murder. As France called on the European Union to threaten new sanctions, Iranian Foreign ministry said that execution of the sentence has been stayed pending a review by the judiciary.
AFP PHOTO PIERRE VERDY