The French capital grows a beard for Men’s Fashion Week 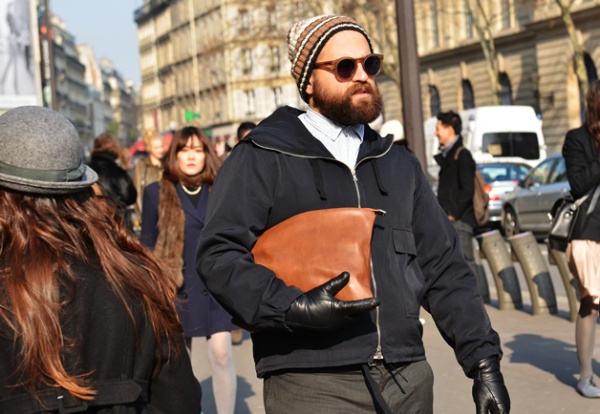 I must admit, I don’t get Men’s fashion shows. They’re strange, unnerving, and often just plain weird. And Men’s Fashion Week in the French capital did not disappoint.

I realise that this aversion is rather hypocritical coming from someone who enjoys wearing fruit-print trousers at any opportunity. As a solemn believer that each and every person should have the right to wear anything they choose, I am saddened by my own duality.

As one commenter on Esquire remarked: “When did it become fashionable for men to dress like women? … half of these men are carrying purses? Wow! No thanks…”¹

Now where is the difference?

Fashion is an art form that, like all others, must continually push boundaries in order to evolve.

This year, Men’s Fashion Week in Paris was the epitome of evolution. Luckily for me, (and the fashionable men of today) many designers found roots in classical design. For Balenciaga, Dior Homme (pictured above), Louis Vuitton and many others, sharp suiting was the focus for Spring/Summer 2013.² In wild and wonderful colours and prints, sailor style, or teamed with a bare ankle and sports shoe – the incarnations were endless.

One of my favourite Men’s fashion moments of the past few years was the rediscovery of the 1950s. Cuffed trousers, rolled up short-sleeve shirts, fastened top buttons, chic bomber-style jackets… And it wasn’t simply the clothes: it was the hairstyles, the glasses, the shoes… So I was very excited to see many designers sticking with this most attractive of trends for Spring/Summer 2013. Paul Smith (pictured above) redesigned the era with his signature graphic prints, and more than a few pairs of ‘mandles’ (men’s sandals).³ Canali (pictured left) took eveningwear from the 1950s and pulled it into the present with brightly monogrammed suit jackets. Gucci (pictured right) shared the idea, but rather than dipping one item in a bucket of paint, they threw the whole model in. They at least kept his shiny patent shoes out, though.

While I was slightly horrified to see a man in pastel tie-dye at Christopher Kane?, the rest of his collection was pleasantly simple. If you simply removed the ‘mandles’, and replaced the unnervingly lithe model with a normal man, it wasn’t bad. I could see one of my non-fashionably-adventurous male friends wearing a t-shirt or two. I think I’d keep the floral trousers in my own wardrobe, though…

Many collections lay on the stranger side of the spectrum. Asian-inspired printed silk appeared on crossover jumpsuits and long-line jackets at Etro. Dries van Noten took camouflage print to new frontiers, that it perhaps shouldn’t have been visiting. Odd shiny jackets and baggy blue striped pants stomped down the runway at Umit Benan (pictured below left). But the award goes to Raf Simons (pictured above right), for strange looks from head-to-toe. The hair was awful, as was the combination of floral jackets and sneakers. Floral jackets like this should be reserved for women, and people should dry their hair before leaving home. It’s just common sense, really. 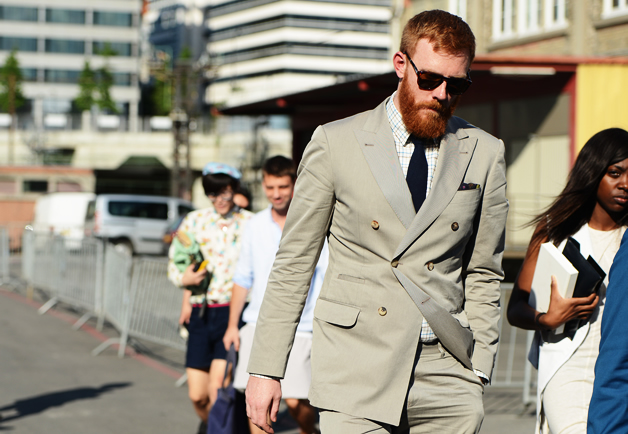 Paris seems also to be in the midst of another love affair. The usual tribes of chiselled jaws and delicate limbs were threatened by swathes of middle-aged hipsters with vast, bushy facial hair.

It seems that all men – be they French fashion designers or Australian Uni students – are obsessed with beards.

This year, I think perhaps my irritation is being slowly soothed. I might even run an eye over the Men’s Paris collections next year…

Though, I’d choose a man in a nice suit over the bearded hipster in ‘mandles’ any day.