Just minutes from the busy A16 autoroute and not far from Boulogne, suddenly the car was juddering over cobble stones. I could hardly believe my eyes as I drove through a huge archway and into a walled town. Montreuil-sur-Mer is encircled by high ramparts complete with a citadel, and is full of amazing old buildings and beautiful houses. There are smart squares with narrow alleyways leading off and onto the ramparts, artisan shops, chocolatiers, chic boutiques and flowers everywhere. 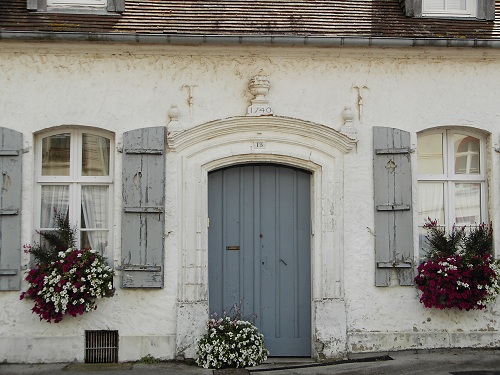 The name suggests that this is a seaside town – and it used to be a wealthy port specialising in the shipment of grain, wine and textiles until the 15th century, hence the name ‘sur Mer’ (on sea). However, tidal changes have had their way and the sea now finds itself several miles away.

The land around this hill top village is now green and lush and given over to farming and livestock. It is dotted with picturesque rural villages, and the tips of church spires peeping out from small forests. The town itself is a ‘ville fleurie’ which is to say it doesn’t skimp on window boxes – everywhere you look are amazing displays of floral artwork and a riot of brightly coloured, sweetly scented flowers.

There are historical plaques everywhere in this town and it can count amongst its past admirers and visitors: Napoleon, Jules Verne, Lawrence Sterne, Gérard Depardieu and one of my favourites – Victor Hugo. The iconic French writer stayed in Montreuil-sur-Mer in 1837 and declared himself much taken with the place and many of the people he met there. He made the town the setting for much of the early part of his novel ‘Les Misérables’.

The novel’s protagonist, Jean Valjean, served as mayor of the town, which was the setting for much of the early conflict between Valjean and the novel’s antagonist, Javert. It was also Fantine’s hometown.

These days Montreuil-sur-Mer is a thriving little place which draws tourists to it like bees to a honey pot – especially on Bastille Day when it holds its famous ‘Bastille Day Antiques Brocante’.  The streets are closed to traffic and the place throngs with lovers of antiques and bric-a-brac. 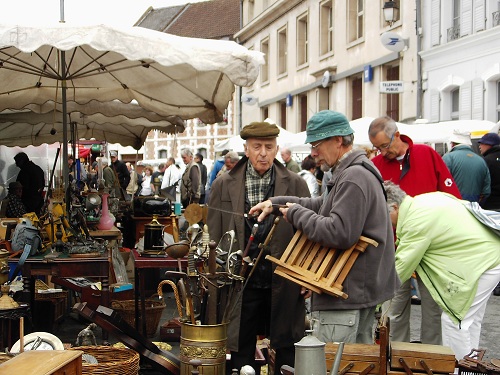 It is also incredibly popular with Parisians who come here for a weekend to experience a taste of rural tranquillity. There are plenty of bars and restaurants to cater to visitors and there is a rich diary of cultural events throughout the year, including a very popular soup festival in October.

However Montreuil-sur-Mer’s busiest time of the year is when the town stages a son et lumière show of ‘Les Misérables’ on the walls of the old castle and the ramparts. Six hundred local people  – a quarter of the population – dress up and participate in this awesome endeavour. Small children, old men and farm animals are roped in to help and give it everything they’ve got.

Canons are pulled into position for the Battle of Waterloo, cavalry charge up the hill and visitors picnic on the ramparts and watch the show agog at the splendour and spectacle.  It is a joyful scene of civic pageantry and of a community celebrating its history and heritage with pride and joie de vivre.