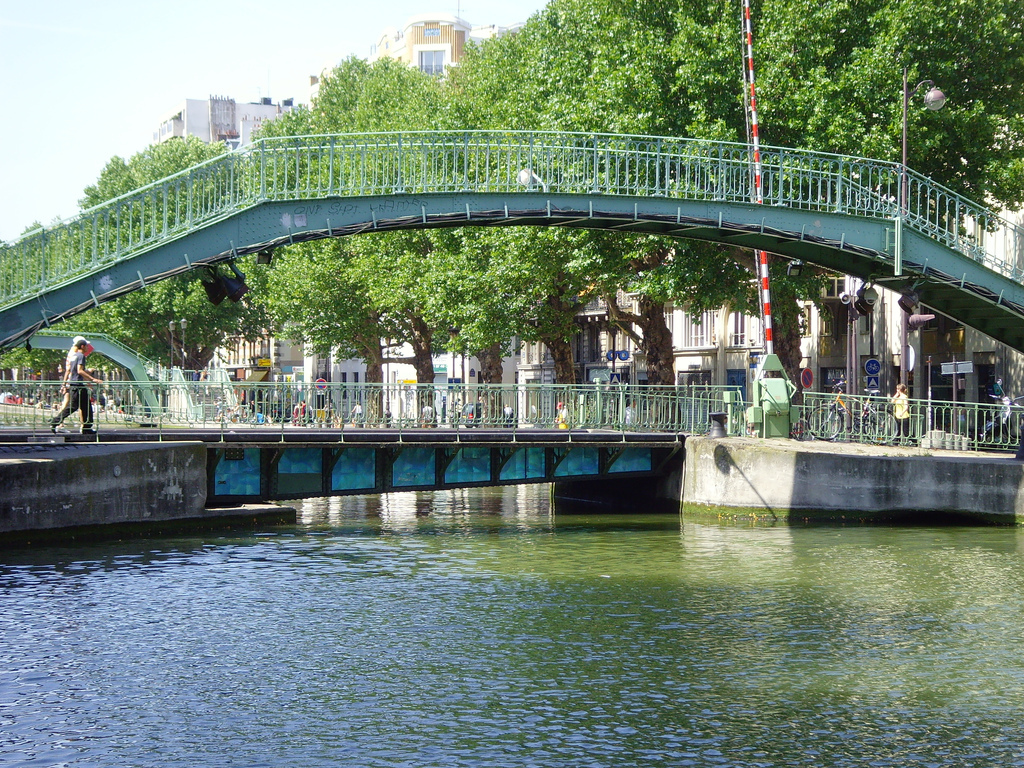 Rediscovering Paris from the locks of Canal St. Martin is a fascinating way of seeing Paris via its watery veins. For centuries, artists, philosophers, conquerors and painters alike have reached out to the heart of Paris through the Seine.

The opportunity for me to explore Paris in this way, on a delightful sunny spring day, was enormously appealing and promised a true adventure.

The 19th century canals are a little-known side of Paris, established by Napoleon as a transport link and a source of clean water. Although apparently financed through a tax on wine (probably not an overly popular initiative at the time) they became vital to the healthy conduct of the burgeoning city. 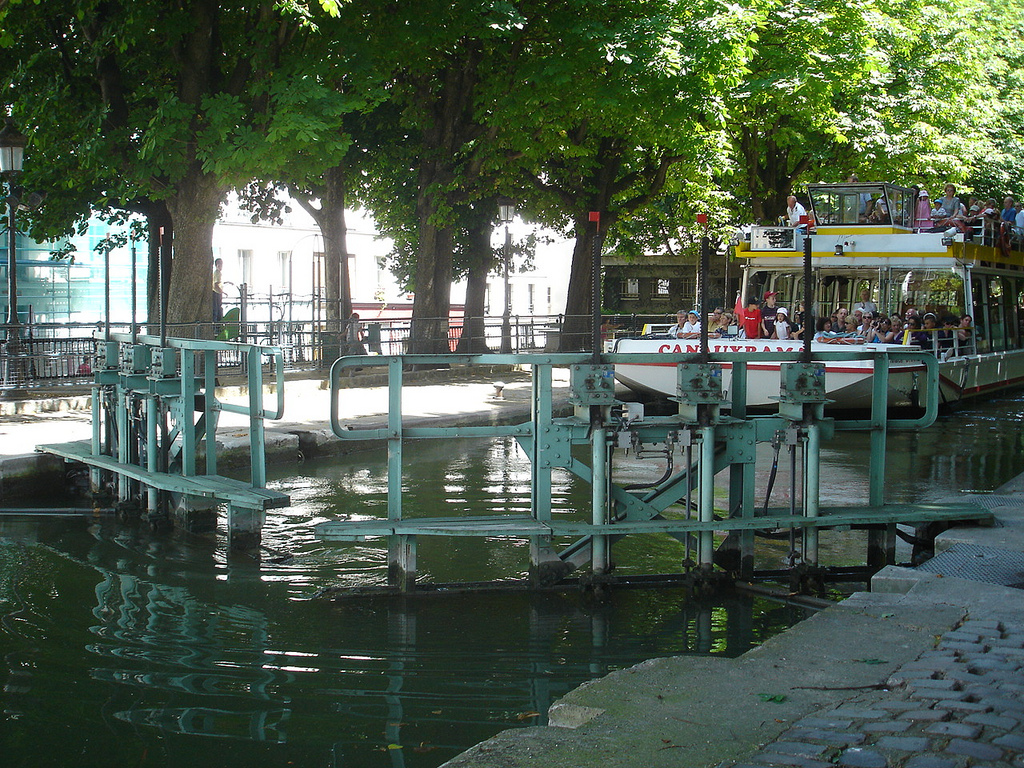 Today, the barges (croisières) for the trip along Canal St. Martin depart from Quai Anatole France on the Seine, at the foot of Musée d’Orsay. The journey starts innocently enough with a sail past the Musée du Louvre, Notre-Dame and L’Île Saint-Louis. The turn into Canal St. Martin marks the start of the real lock adventure.

The sight of the first lock created considerable excitement on our little croisière – somewhat like the suspense before the commencement of a theatrical performance. Certainly the ‘performance’ in this case didn’t disappoint.

The loud whirring of the great lock engines signal a performance is about to begin. As water pours into our hold we feel our croisière purposefully float higher and higher. Eager fellow passagers, French and foreigner alike, crane their necks for a glimpse of the spectacular. The gigantic doors of the lock slowly and majestically open, ready for the finale.

From our new vantage point of some metres higher than at our arrival at the lock, we sail along the canal to discover authentic Paris, passing a myriad of little boats, decorated like gypsy caravans, on the side of the canal. 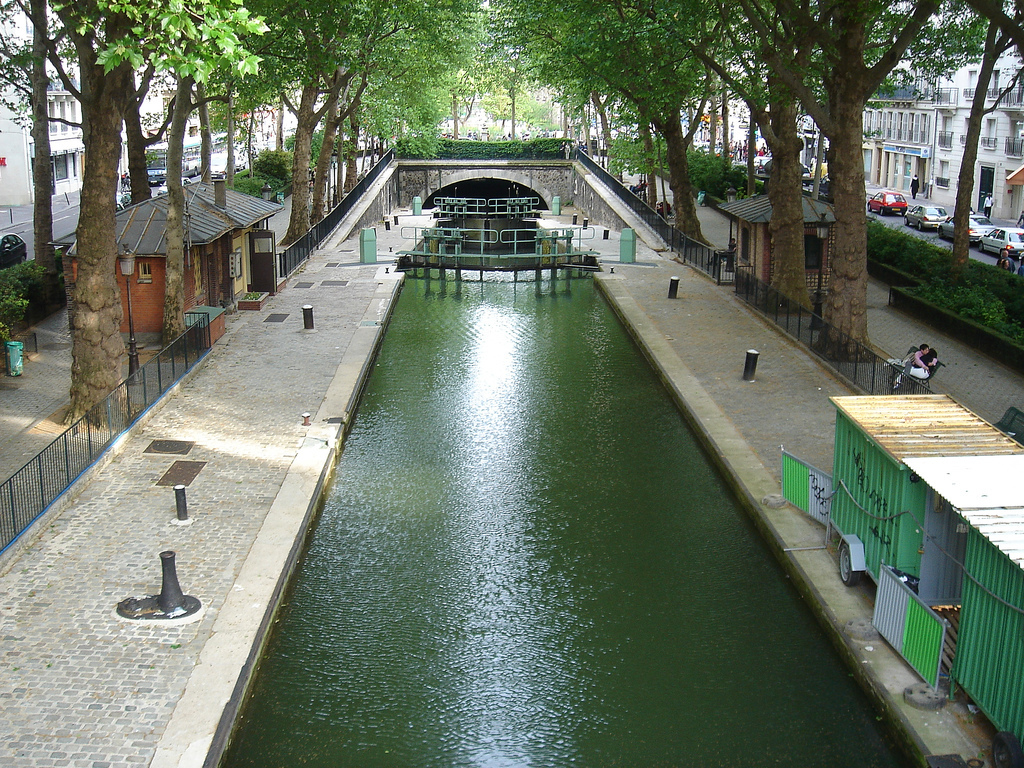 The first section of Canal St. Martin has an eerily-lit tunnel with shafts of light from its manholes dancing tauntingly against the tunnel walls. Each lock through which we passed spoke to us from Paris’s rich past, such as the lock of death: the site of the terrible Montfaucon gallows.

At 42 kilometers above the Seine, we arrived at the Parc de la Villette. More gritty than say the Jardin des Tuileries, but nonetheless offering a number of interesting diversions: la Cité de la Musique, la Géode and the Science Museum. A few moments drinking a citron pressé in the park, in the spring sunshine, was a delightful way of finishing a morning of rediscovery.

A journey along the waterway allows you to pass through a part of Paris that many people wouldn’t see on a normal tour. It certainly offers a refreshingly different perspective for those who know Paris well, passing the St. Louis hospital and the Hôtel du Nord. The waterway achieved certain fame due to its inclusion in the film ‘Amélie’.

Over the last few decades it has become one of the most fashionable spots in Paris with its avant-garde galleries. On warmer days it is common to see Parisians with their fromage et saucisson enjoying a picnic on the banks of the canal or in the evening enjoying the sunset. 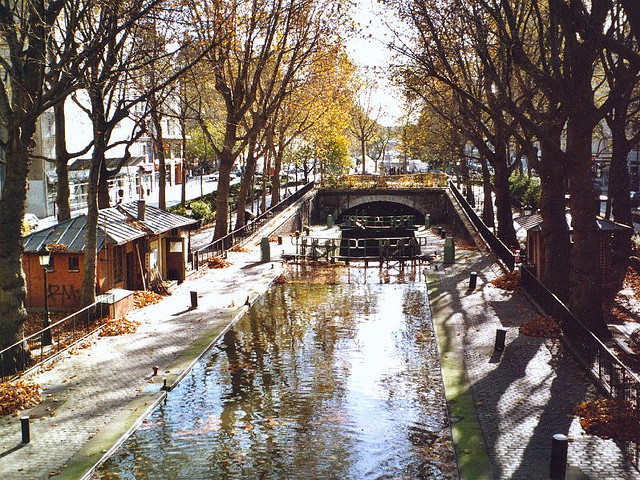 The ancient lock technology, in a way, seems an anachronism in this day of ‘push-button-and-click’ technology. However it struck me that the opportunity to touch the past in this way is just the type of experience we seek when travelling. The opportunity to do so, easily and so inexpensively, in the heart of one of the most attractive cities in the world makes it all the more remarkable.