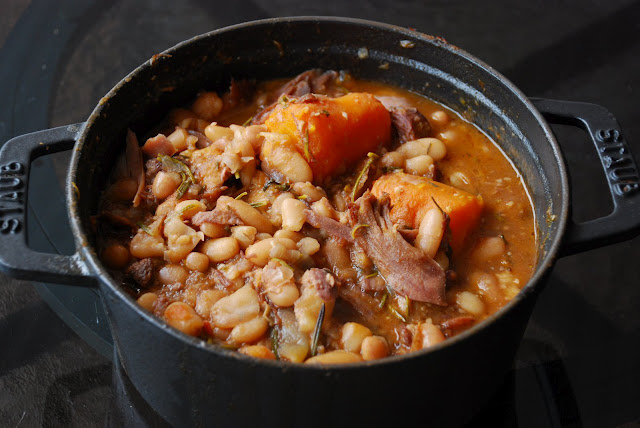 Western Pennsylvania, where I live, has transitioned from summer into fall, and my gustatory cravings have been turning to so-called ‘comfort foods’.

My dictionary defines this term as “food that provides consolation or a feeling of well-being, [and is often] associated with childhood or home cooking”.

“a rich, slow-cooked stew or casserole originating in the south of France, containing meat (typically pork sausages, pork, goose, duck and sometimes mutton), pork skin (couennes) and white haricot beans. The dish is named after the cassole, the distinctive deep round earthenware pot with slanting sides in which cassoulet is ideally cooked.”¹

There are many regional variations, the best-known being from Castelnaudary (near Toulouse) – the self-proclaimed “world capital of cassoulet”, where there is a yearly Fête du Cassoulet in late August. 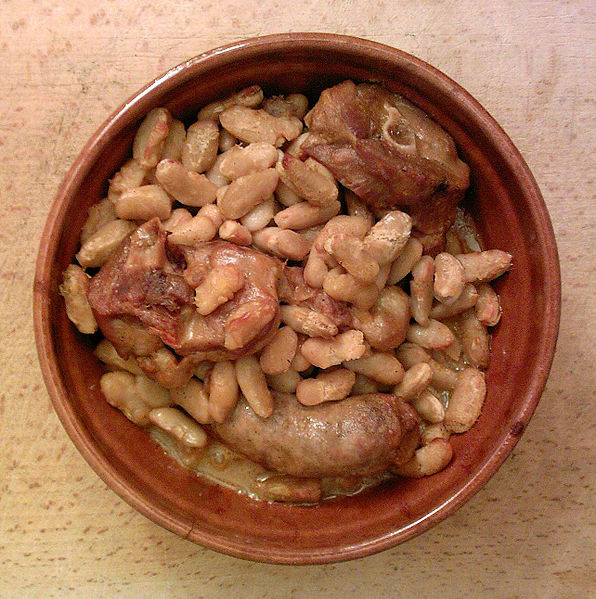 All variations include white beans and either duck or goose confit (meat salted with herbs, and slowly cooked in its own rendered fat – yes, great for your cholesterol!), pork, lamb, and sausage. What defines any given variety is the types of meats used.

I have to admit that I have never cooked cassoulet, because genuine ingredients are difficult to come by in the United States. My father – who worked as a chef for about 20 years of his working career – would prepare that dish regularly, usually for company. And boy, did we love cassoulet, even if it led to a bit of, well, afternoon flatulence…

The signature peasant dish of Alsace. Choucroute in French means ‘sauerkraut’, which, as you probably know, is fermented shredded cabbage. 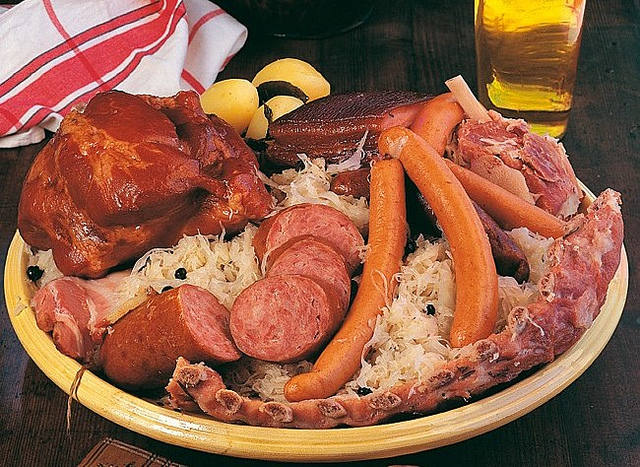 The sauerkraut is generally cooked with Riesling wine, and seasoned with black peppercorns, cloves, a bay leaf, garlic, juniper berries and onions. It is usually served with potatoes and accompanied by beer or white wine.

I do have fond memories of choucroute parties at my house when I was growing up. My father made a wickedly good choucroute, which he would always classify (in all modesty) as “champion” (top-notch). My brother and I used to joke that he made choucroute better than any Alsacian! To be honest, yes, my father’s choucroute remains the best that I have ever had.

Folks on the internet often mention Bofinger, in the Bastille area, as the best restaurant for having a choucroute garnie in Paris. The décor of that restaurant alone is worth it.

‘CarbonnaTes’ (if pronounced with a Ch’ti – or northern French – accent) is an onion and beef stew cooked in beer. Beers of choice are Oud bruin, Brune Abbey beer or Flanders brown, which have a bitter-sour flavor. A little vinegar and some brown sugar are typically incorporated into this recipe and, in some versions, a few slices of gingerbread are laid on top of the simmering stew to dissolve into it. It usually tastes better reheated, and should be served with frites. 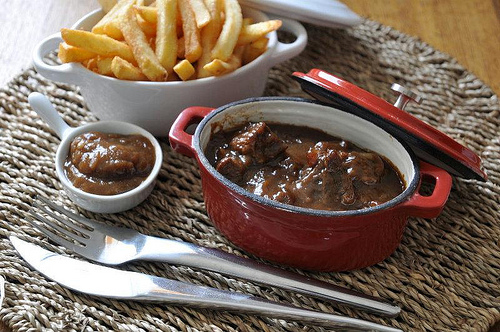 Although this dish hails from northern France, my region of origin, I do not recall eating it often when I was growing up. But I have prepared it very successfully; it is easy to make and quite delicious!

What about you? Do you have a favorite comfort food from your childhood?