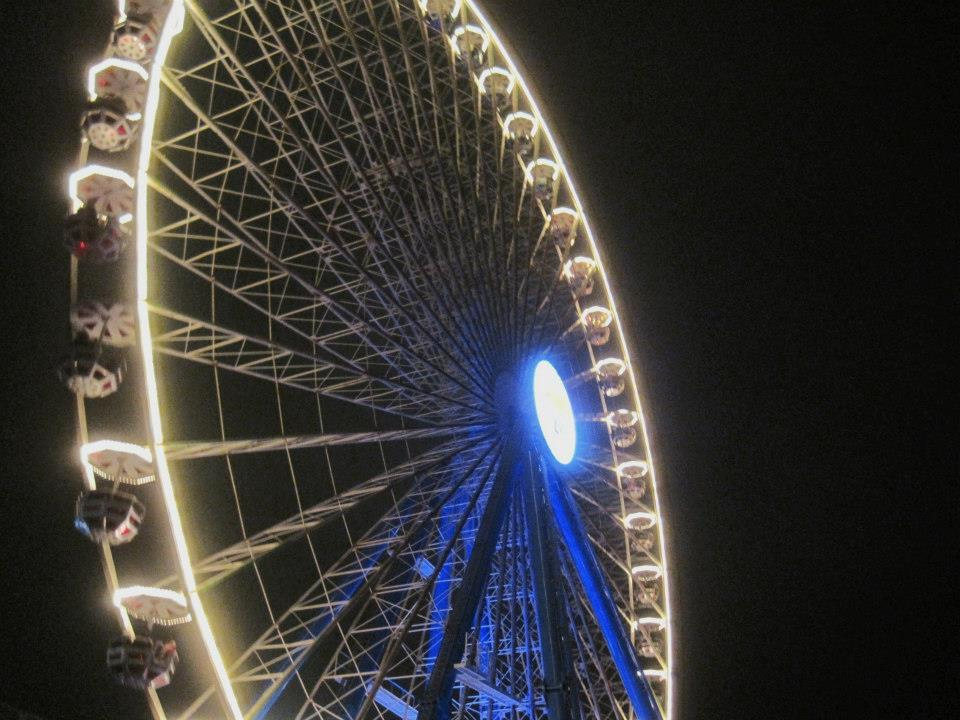 The Fête des Lumières in Lyon is a can’t-miss spectacle, so if hotel prices skyrocket out of your budget, skip sleeping and make France’s second-largest city your playground!

After reading about the Fête des Lumières in Charlotte’s article last week, this Francophile could not wait to attend.

Thanks to the event’s widespread appeal, however, affordable accommodation was virtually impossible to find. With throngs of Frenchies and tourists descending upon the city for the weekend, prices rose and availability plummeted. What rooms existed would have cost a month’s rent to book.

Determined to see Lyon in all its illuminated glory, I channeled my inner party girl to passer une nuit blanche, or pull an all-nighter. Though not ideal, staying up all night proved my sole option of seeing Lyon’s light shows. Luckily, the city bustles with activity well past the witching hour, making a night sans shut-eye possible as well as enjoyable.

The lights of Lyon

A few fellow merrymakers and I took an afternoon train to Lyon, arriving around 5:30. As soon as we crossed the Rhône to arrive in the city center, we understood why the event is internationally known. 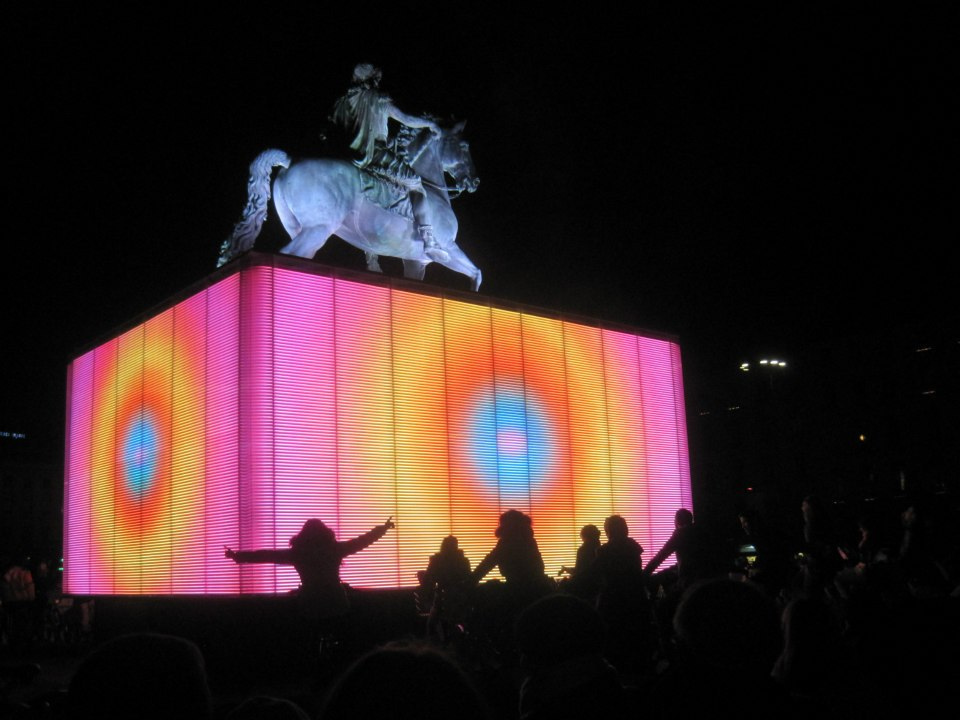 The sky sparkled, thanks to the strings of lights in the streets, projections on historic buildings, and the candles and lamps in the windows of the Lyonnais. Between the luminosity and the crowds, we felt energized for the long night ahead.

Of the many spectacular displays, my favorites included the ecologically-friendly illumination of the Louis XIV statue at Place Bellecour. Spectators’ own muscles supplied power to the installation. As volunteer cyclists pedaled faster, the display peaked with explosions of fireworks and colorful lights.

At the heart of French cuisine

We endured the chilly air with the help of vin chaud, available on every street corner along with sandwiches, crêpes and kebabs to help keep hunger at bay. But by 9:30 p.m., not even mulled wine could keep us warm. The cold gave us an appetite for not only dinner, but also somewhere indoors to reheat our frozen feet. 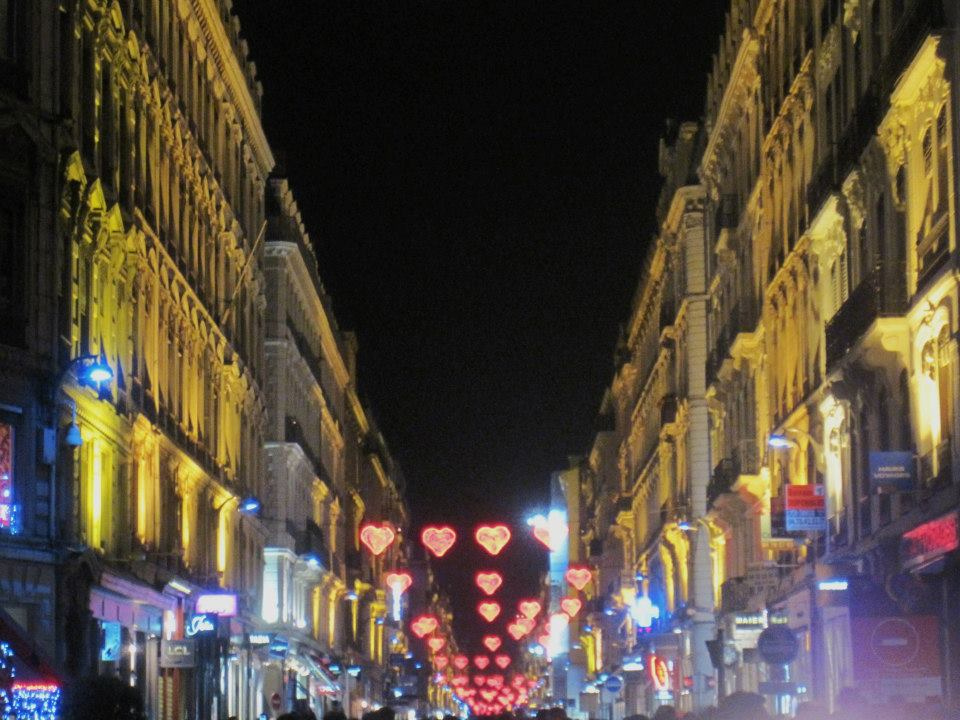 Lyon prides itself on its status as France’s gourmet food capital, but the crowds made snagging a restaurant table a challenge. We were about to settle for street food when the small but cozy ‘Qu’importe L’Ivresse’in the 2nd opened up a table.

Due to the high volume of patrons, they were serving only charcuterie and cheese plates. Paired with a glass of Côtes de Rhône, the appetizers were more than enough to fill our bellies and recharge us for the second half of the night.

After leaving the restaurant, we heard what sounded like an American college marching band in the distance. Intrigued, we followed our ears and came across a brass troupe giving an impromptu street concert. A few minutes turned into over an hour when the concert became a dance party, helping us endure the chilly weather while enjoying the bright lights. 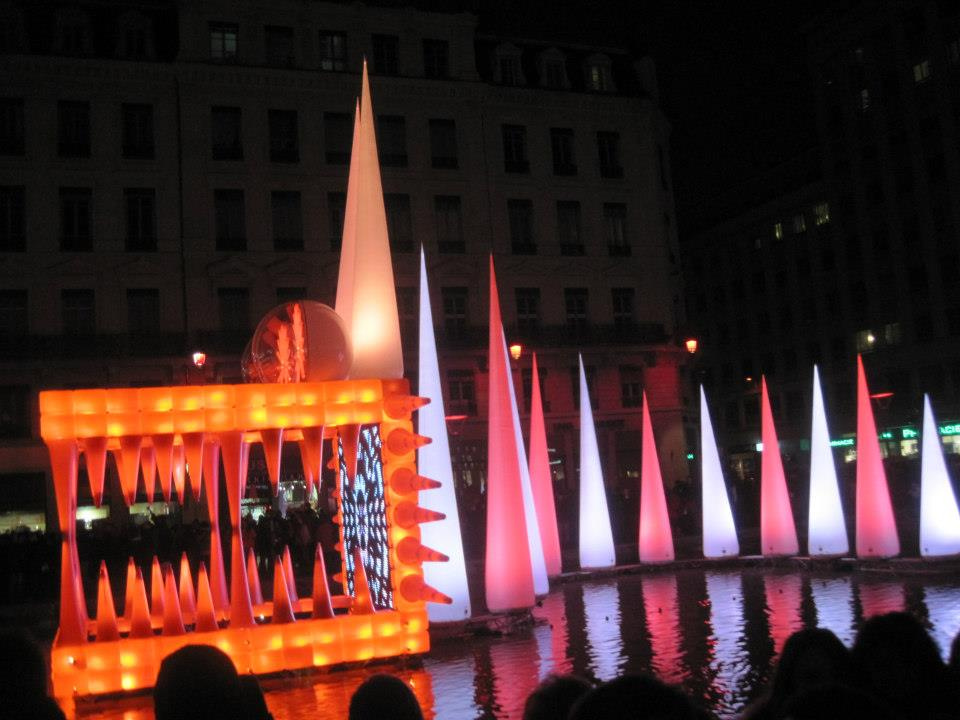 The temperature dropping and our train departure still several hours away, we decided to move the dancing indoors. Thanks to the large student population, late-night clubs and bars abound in the city. We decided on Ayers Rock, one of Lyon’s several boats-cum-bars docked on the Rhône. The venue was packed yet spacious, with a diverse clientele and a wide variety of music.

Before we knew it, it was time to catch our 6.00a.m. TGV. We boarded the train exhausted but exhilarated.

Skipping the high costs of a hotel turned out to be a blessing, allowing us to explore the nighttime festivities of one of France’s most dynamic cities.

All images by Anna Kotecki
1. A giant, sparkling ferris wheel entertained children and adults alike.
2. Cyclists powered the lights of this brilliant Place Bellecour display.
3. City streets decked out for the fête.
4. Fire-breathing dragon? No, just another of Lyon’s many light installations.